Making an Aircraft – No Small Feat

In my first TOM challenge post, I described how Boeing innovated in the aircraft manufacturing industry by delivering a totally new concept for an airplane. This feat proved to be incredibly challenging for a few reasons. First, Boeing dreamed big and envisioned a concept fundamentally different from its prior models. If we take a step back, though, we realize that another reason the project Boeing undertook was challenging was because making an aircraft is just plain hard.

Figure 1 touches on the complexity of building a Boeing aircraft; in just one year, Boeing procures 783 million parts to produce its fleet. Furthermore, these parts are sourced from over 5,000 factories.[1] 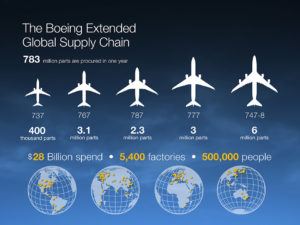 Boeing’s supply chain complexity creates operational challenges. For example, Boeing has a massive backlog of aircraft orders; in 2015, backlog orders for commercial airplanes were more than $400M. This buildup of demand puts immense pressure on lead time reduction, which Boeing is continuously trying to improve. In Boeing’s 2015 10-K, the firm states that it is producing 737’s (one if its least-complex models) at a rate of 42 per month, with hopes of increasing this number to 47 per month by 2017. Nominally the increase may seem minimal, but faster lead times enable Boeing to better meet demand and deliver millions of dollars to the top line.[2]

Boeing is using a diverse digital toolkit – tools such as augmented reality, cloud computing, internet of things (IoT), and advanced analytics – to meet both its own and its customers’ operational challenges.

One challenge Boeing’s operation faces is that many of its production processes rely on worker know-how. As a result, training workers is imperative and often time-consuming. In an attempt to reduce training times and better document work instructions, Boeing is currently participating in an augmented reality research project through the Digital Manufacturing and Design Innovation Institute (DMDII). DMDII is a federally funded non-profit organization that focuses on developing advanced manufacturing technology and improving American manufacturing competitiveness. Boeing’s specific project intends to develop a “simple and intuitive method to quickly create augmented reality work instructions using 3D cameras with advanced image processing and computer vision algorithms.”[3] Boeing hopes to deploy this technology so that the firm can record an expert operator performing a complex process and simultaneously document the process in intuitive digital work instructions, thus reducing the cost and improving the speed of training.

Boeing also understands that its airplanes are complex and therefore difficult for customers to maintain / service. In an attempt to reduce this service burden, Boeing has fully embraced the IoT in the 787; the 777 transmitted only 1 MB of data per flight, while the 787 transmits ~28 MB of data per flight.[4] By connecting its airplanes / sensors to the internet, Boeing is able to provide simple operational dashboards to airlines that help them save on fuel and maintenance every day. Additionally, in July 2016, Boeing announced a partnership with Microsoft intended to transition its airline solutions to the cloud, further enhancing the accessibility of these tools across mobile devices.[5]

I am pleased to see Boeing using digital transformation to update its business and operating model while also taking a leading role in developing advanced manufacturing technology through organizations like DMDII. Initiatives such as Boeing’s DMDII research project not only benefit the company, but also enhance America’s digital manufacturing ecosystem and aim to reverse the trend of good-paying, advanced manufacturing job loss.

I believe Boeing should continue to enhance this ecosystem and American manufacturing competitiveness by exploring other advanced manufacturing technology. For example, airline assembly operations often are cluttered and difficult to maneuver through (see Figure 2). This environment could serve as a proof of concept for advanced robotics technology, such as the Baxter Robot from Rethink Robotics (see Figure 3). Baxter is a “smart” robot that manufacturers are using to program and perform repetitive tasks alongside workers. The robots work with humans and free up time for higher-skilled tasks. Baxter delivers bottom-line value to manufacturers, forces American manufacturing workers to learn more advanced skill-sets, and creates jobs in the Boston area (where the company is headquartered). By utilizing Baxter, Boeing could continue to address complexity with digital technology while also building on the leadership role it has taken in American manufacturing through initiatives such as DMDII. Macy’s in the Digital Age

Will your next running shoe be 3D-printed?