Before we take a look at how Under Armour is reinventing its supply chain by adopting digital technologies, it’s important to note a few facts –

The apparel and footwear industry has not seen much innovation around its manufacturing processes in the last century. However, the emergence and adoption of technologies such as 3D-printing, scanning, and imaging are changing the way Nike, Adidas, New Balance, and Under Armour design shoes. These technologies are essentially disrupting the footwear design and production process by enabling customization and reducing lead times and time in transit. [3]

Figure 1 below provides a snapshot of the supply chain model before and after the introduction of 3D-printing. 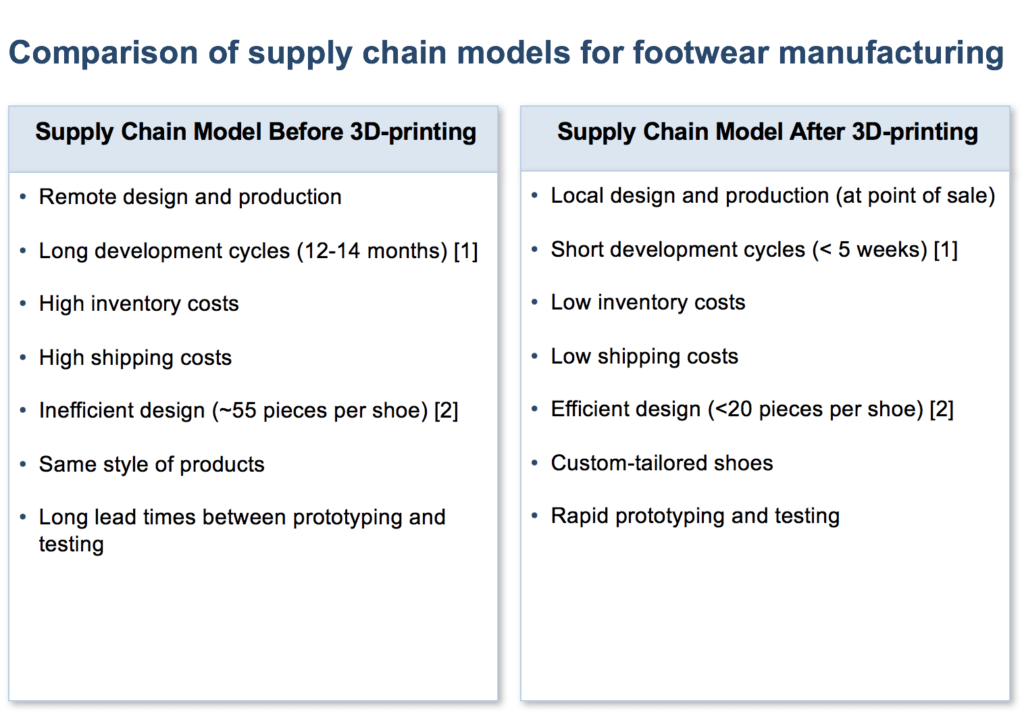 Prior to 2015, Under Armour’s footwear and apparel were produced by 29 different manufacturers across 14 countries, with 65% of products made in China, Jordan, Vietnam, and Indonesia. [4] With rising labor and energy costs in China and other developing markets, complications with international shipping, and significant advancements in manufacturing technology (e.g., robotics, automation, 3D-printing), Under Armour began to reevaluate the 100-year old manufacturing model.

“To develop and discover ways to use advanced manufacturing processes to make products on a smaller scale in local markets while improving products’ performance.” [4]

To achieve the above goal, Under Armour launched the “local-for-local” manufacturing model, helping manufacture products closer to the markets where they are sold.

How is Under Armour implementing this new model?

Earlier this year, Under Armour unveiled the UA Lighthouse, its new center for manufacturing and design innovation in Baltimore. The center will focus on developing cutting-edge manufacturing processes and leveraging advanced technologies to design high-quality products locally with minimal amounts of raw materials.

Specifically, this new innovation center in Baltimore has –

Here’s a video that provides a sneak peek into the UA Lighthouse:

Benefits to Under Armour:

Looking to the future, Under Armour will need to take actions to address the following:

[5] The 3D-Printed athletic shoe race and what it means for your retail based supply chain. (2016, April 17), PR Logistics Corp, http://prlogistics.com/the-3d-printed-athletic-shoe-race-and-what-it-means-for-your-retail-based-supply-chain/, accessed November 17, 2016.

Student comments on Will your next running shoe be 3D-printed?