The world is flat. That is how New York Times reporter Thomas Friedman described the way in which the technological revolution is creating an increasingly level global economic playing field by allowing people around the world to communicate, collaborate and compete (it is also the title of the best seller that he published in 2005)1.

This digital transformation is having a huge impact on our lives. From healthcare to transportation, everything around us seems to be changing as the world becomes “flatter” and the concept of the internet of things develops. But in certain industries the consequences of this revolution – and the business opportunities that are being generated thereof – are perhaps less obvious.

One such industry is media, in particular, B2B marketing.

The shift to digital is no doubt happening here too. A recent survey conducted among senior B2B marketing professionals from companies across a range of product categories, found that 77% of respondents identified digital marketing (through a website, email, SEO, social media, blogs etc.) as a high priority for them, largely at the expense of offline channels which were only described as high priority by 23%5.  There is, however, one notable exception to this trend: the business of events.

This traditional offline channel, which includes exhibitions, trade shows, festivals and conferences, far from falling out of favour, seems to have become increasingly relevant. The same survey concluded that 74% of respondents planned to increase their marketing spend on events in 2016, which coupled with the fact that only 29% will allocate over 51% of their marketing budget to digital channels6, leads me to believe that a significant portion of companies’ marketing spend is being funneled towards these events. 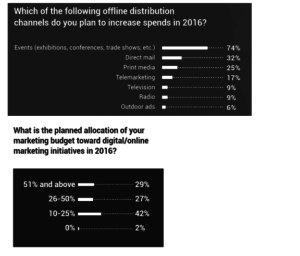 Why is this seemingly old-fashioned and cumbersome channel growing in popularity when every other trend – even logic! – appears to point to digital as the new, most effective way of communicating and connecting with customers? The answer probably lies in the value of the face-to-face interactions that take place at these events. In an increasingly digitized world, where a higher proportion of the tasks that we perform at our jobs are shifting to online, meeting customers and suppliers in person and building “non-virtual” business relationships, is becoming a rare and ever-more-valuable investment.

Some companies have noticed this trend and are building strong business models around it. One example is Informa Plc. – a UK-listed company focused on business intelligence services, academic publishing and… events. Informa (as well as providing other services) organises more than 170 exhibitions and 2000 other events all over the world, covering topics that range from Real Estate to the Internet of Things, and makes money mainly by charging exhibitors and attendees a fee.

Over the past few years, Informa has been investing heavily in the sector: in 2013 it acquired Agrishow Brazil and Fanexpo Canada Events; in 2014 Hanley Wood Exhibitions as well as three other events; in 2015 Megaconvention and Dwell on Design – the largest design event in the US –; and, notably, a couple of weeks ago Informa acquired Penton – the leading independent US Exhibitions and Professional Information Services group – for $1.6bn, which will add 30 exhibitions to its portfolio7.

But growth in Informa’s events business has not just been M&A-driven, in fact, its exhibitions division – and only this division – has shown consistent double-digit organic growth over the past 3 years8.

However, the extent to which the value of face-to-face interactions and the popularity of events is increasing, is perhaps most clearly highlighted by Informa’s recent share price performance. 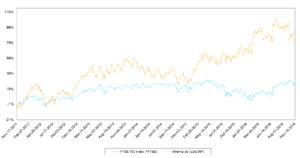 And even more so by the average performance of companies competing in the events space. 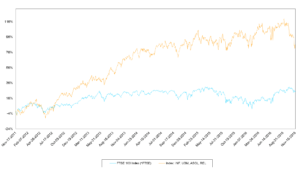 Considering the above, if you believe a company’s share price accurately reflects investors’ expectations around its future,  it is probably fair to say that betting on events and face-to-face interactions becoming more valuable, has thus far garnered considerable support in the market.

So while the world may well be getting flatter as a result of the widespread shift to digital technologies, in some respects, it is just as round as it has always been. If not rounder.

2 ITU is the United Nations’ specialized agency for information and communication technologies.

How to become the next Leo Messi