What we wear directly impacts the climate. Making a single t-shirt results in carbon emissions equal to driving a car for 10 miles [1]. Instead of hiding the facts, Nike has embraced them. As arguably the world’s most influential producer of active apparel and footwear, Nike has placed climate change front and center. Having suffered the impacts of climate change, Nike has been proactive in both insulating its supply chain and reducing its own carbon footprint. But where is the line between altruism and competition? Should Nike inspire others to follow in its footsteps?

Climate change has hit Nike first-hand. Operating 666 factories in 43 countries [2], many in Southeast Asia, Nike has a supply chain that is sensitive to the effects of extreme weather. For instance, in 2008, Nike was forced to shut down 4 factories in Thailand due to flooding [5]. In addition, Nike is increasingly concerned about how global climate shifts will impact its raw materials. “Changing climate patterns could cause disruptions across our supply chain…Water scarcity and quality, byproducts of climate change, could substantially increase costs of textile manufacturing [3].” Cotton, the main input for Nike’s athletic wear, is susceptible to drought and temperature fluctuations. Cotton yields drop steeply when temperatures rise above 89.6 degrees [4]. Price changes are ultimately translated to the consumer: “[Climate change] puts less cotton on the market, the price goes up, and you have market volatility [5].”

Nike has taken direct measures to insulate its supply chain, including securing a global property protection program that reduces the monetary impacts of weather events on physical assets [3]. On top of insurance, Nike has re-located several Southeast Asian facilities outside of flood zones, incorporated synthetic fabrics for its athletic clothes to address cotton shortages, and moved to water-free dyeing to combat draught [6].

Most companies would have stopped at protecting themselves, but not Nike. Nike recognizes the long-term solution to climate change is to “walk the talk”. By focusing on reducing its own environmental harm, Nike has committed itself to the climate change cause. To honor its commitment, Nike has moved many factories to water and chemical-free dyeing known as “ColorDry”[7, Figure 1], stopped sourcing leather from the Amazon, and reduced hazardous chemical discharge from its supply chain. For instance, now 71% of Nike footwear is made from recycled manufacturing products (i.e. old shoes, rubber scraps, etc.), cutting carbon emissions in the process [8]. In addition, Nike has committed to using 100% renewable energy to power all facilities by 2025 [9]. 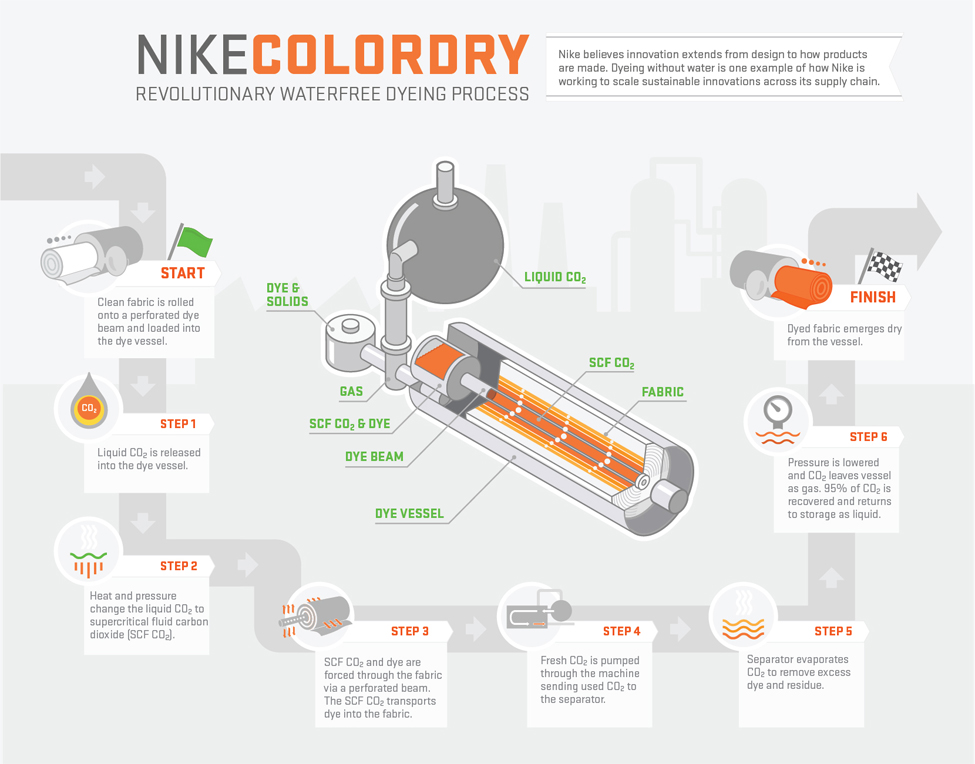 Nike has also invested in climate change beyond its own company. Partnering with MIT on a crowd-sourcing platform called “Climate CoLab”, Nike encourages citizens to “work with experts and each other to create, analyze, and select detailed proposals for what to do about climate change [10].” By seeking submissions on how apparel companies can design, create, and adopt low-impact textiles, Nike hopes to leverage collective-thinking to influence the industry as a whole. In fact, Nike has created an app called Making that predicts the climate impact (chemistry, waste, and water) of raw materials, helping any designer select environmentally friendly inputs [9].

Nike has undoubtedly brought addressing climate change to the forefront, but Nike can further leverage its brand name, size, and scale to influence consumers and other corporations. Although Nike has already started educating contract factories on climate impact, helping them increase energy efficiency and decrease carbon emissions [9], Nike has the rare opportunity to transcend its immediate sphere of influence. Currently, Nike ads predominantly feature sports and functionality, with social responsibility playing a supporting role. If Nike can focus promotions more on climate efforts, especially during blockbuster events such as the World Cup, etc., the company can influence the global consumer to purchase sustainable products, prompting competitors to follow Nike’s example.

Furthermore, Nike is often the first-mover, but there is opportunity to engage the industry who is also suffering the impacts of climate change. Nike can pool resources with competitors to invest in technology or make donations to research facilities that tackle climate change. For instance, collaborating with other corporations to create an app akin to Making would bring increased awareness and user adoption.  Finally, Nike can also encourage competitors to join the American Business Act on Climate Pledge [11]. Currently, several major athletic-wear companies are missing from the list, including Adidas and Reebok. Ultimately, given its leadership in the category, Nike should not only hold itself, but also its competitors to the highest standards.

In order for Nike to become the poster child for climate change and mobilize the industry, the end consumer must be ultimately be on board. Next time you buy a pair of sneakers or a t-shirt, will you join Nike’s cause?

USACE in the Age of Climate Change

Student comments on Nike: A Poster Child for Climate Change?