Video games are no longer confined to personal computers and living room consoles. The present technology cycle has seen the advent of mobile-centric gaming as well as other new ways to experience gaming culture through alternative media channels. Activision Blizzard, Inc., a leading developer and publisher of traditional PC and console game software, has made bold moves to transform into a next-gen global entertainment conglomerate that can take advantage of these emerging trends.

Due to the mass-market saturation of mobile smartphones with multi-core processors, advanced graphics chips, and precision touch screens, the vast majority of people in the developed world now carry powerful gaming devices in their pockets. With Wi-Fi and high-speed cellular networks blanketing most populated areas, current-gen devices have enabled consumers to instanteously find, order, download, and play games on demand. Ease of access and a slew of free-to-play (F2P) offerings have attracted a mass audience of “casual gamers” with increasing engagement across historically non-core market segments. A recent study by the Pew Research Center found that 49% of all American adults now commonly play video games – a figure that is split almost evenly between men and women.1

All this has driven the rapid growth of mobile and tablet game revenues, which include revenues from ads, freemium-type micropayments, and sales of pay-to-play (P2P) games. The mobile gaming market is forecast to grow at a 12.4% CAGR, reaching $52.5B by 2019, comparing favorably with the projected 3% annual growth of revenues from PC and console games.2 Traditional game developers must adapt as the percentage share of devoted gaming platforms shrinks in relation to the overall market.

Meanwhile, the market for competitive gaming is exploding at a growth rate of 40% YoY, with global revenues expected to surpass $1B by 2019.3 The rise of eSports is a major phenomenon, as Jordan pointed out in his terrific post, but this also presents a question for developers like Activision: can they still capture revenues from people choosing to watch games, rather than purchase and play them on their own devices?

If eSports is the new football, then Major League Gaming (MLG) is the new NFL. Likewise, with smash hits like Candy Crush Saga, King Digital is a market leader in mobile gaming. Combined with the launch of Activision Blizzard Studios, the characters and worlds of an emerging “Blizzard universe” can reach a growing base of consumers through nearly any media device. By diversifying its revenue streams across complementary entertainment verticals, pricing models (F2P, P2P, and subscriptions), and customer demographics, the company has positioned itself to sustain long-term growth. 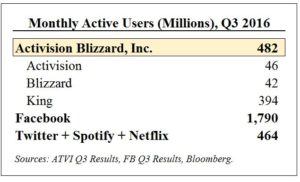 Activision Blizzard’s core strategy depends on its ability to connect with diverse audiences through the generation of captivating franchises and delivery of high-quality interactive content. A key metric of the company’s success in delivering on its customer promise is its number of monthly active users (MAUs), which currently stands at 482 million MAUs across 196 countries.5 As the customer base has globalized, Activision has expanded the employee talent pool to reflect its audience mix. The company has opened dozens of studios and offices in the Americas, Europe, and Asia, and now employs thousands of producers, designers, programmers, artists, and support personnel worldwide. To fully leverage each employee’s talent throughout game development cycles, executives have invested heavily to outfit every studio with cutting-edge computer hardware and software development tools. Activision also reinvests cash flows to periodically refresh its networking and communications capabilities so cross-border teams can effectively collaborate on major projects and IPs.6,7

The preservation of Activision’s deep competitive moat hinges on the its ability to attract creative and talented employees who share a passion for the company’s franchises and sense of personal commitment toward delivering the very best experiences to the fanbase. By maintaining a creative culture in which each employee is also encouraged to enjoy content as an end-user and fan, Activision can drive the continued production of high-quality content and stimulate additional growth in user engagement.

History has shown that all major technology trends simultaneously create winners and losers across each TMT sub-sector.8 The current wave of digitization poses many challenges to the traditional game software industry, but with its current strategy, Activision Blizzard is likely to grow stronger through the cycle and create increasing value for its stakeholders.