2009 saw the launch of two similar crowdsourcing platforms that ended up having very different fates. One is a household name, while the other you’ve probably never heard of. One raised a total of $185 million in venture funding, while the other raised $10 million. One has been profitable since 2010, while the other filed for bankruptcy. One is Kickstarter and the other is Quirky. Kickstarter is a household name and has been profitable since 2010 – with only $10 million in venture funding led by Union Square Ventures. Quirky on the other hand raised $185 million, never quite found the same traction as Kickstarter and ended up filing for bankruptcy in 2015. We all know of Kickstarter’s success, but what went wrong with Quirky?

Quirky launched as a crowdsourced invention platform for consumer products. The concept was that everyone has a great idea, so why not bring all those ideas together, have the community vote on the best ones, refine the idea further and then turn that idea into a real product for sale. Quirky would manufacture, market and sell the product while the ideator would be paid a royalty on each unit sold. 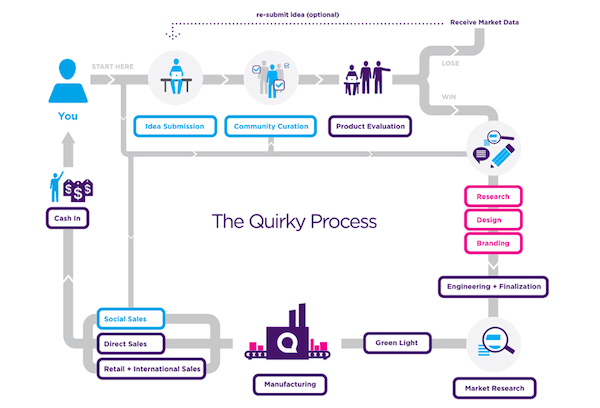 Quirky created value by allowing anyone from a regular Joe to a serial inventor see their ideas come to light with the help of an active community. Products that otherwise would have never seen the light of day were suddenly able to come to market. The community added value by refining product ideas collectively and making the product the best version of itself. Also, the community acted as a research panel that would vote on which product ideas they liked the best, hence bringing to market the best ideas that would expect to see traction right away. Essentially, the platform democratized new consumer product development.

Value was captured by both Quirky and the ideators when products were brought to market and sold through multiple channels. This included direct sales to consumers through Quirky’s website and through retailers that stocked their products. Quirky would then share a percentage of revenue with the community, with the inventor receiving roughly 10% of all revenues generated. Quirky would control the IP rights.

Quirky’s most well-known product that went through the entire development process was the Aros smart window air conditioner. It was one of the first connected devices being developed back in 2011 when that type of development would have been restricted to major appliance manufacturers. Eventually, GE (one of Quirky’s investors), saw the traction it was getting with the community and decided to get involved and helped bring the product to life. Unfortunately, Aros would be the first and only major product that earned so much press and fanfare. Despite all the buzz, it sold less than 2,000 units. 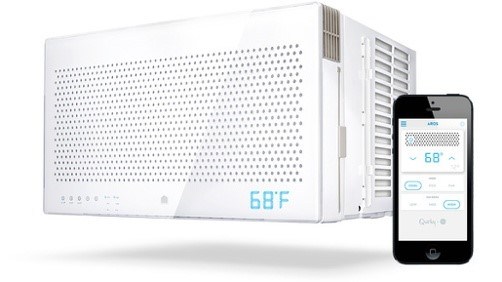 Despite having $185 million in funding from blue-chip investors such as GE and Andreessen Horowitz, Quirky could not build a sustaining business model and burned through all their cash. In July 2015, they had to lay off over 100 people and later that year filed for bankruptcy. So what went wrong?

Compared to Kickstarter, Quirky’s model took on a lot of risk which I believe is the single biggest inhibitor to building a sustainable platform like this. Kickstarter as a platform crowdsources ideas and helps develop new products and ideas, but they themselves don’t take the risk of bringing those products and ideas to market. The campaign creator and backers are the ones taking all the risk. As a platform, Kickstarter has lowered its risk profile by only taking a fee on facilitating the funding. This is why Kickstarter was able to be profitable so quickly. Quirky on the other hand took all the risk by having to take the ideas being submitted through the entire development cycle. Plus, they had to help market and distribute the product, which is not their core competency. If a product was not as successful as expected, Quirky could be stuck with a lot of inventory on top of all the time invested in development. Manufacturing products in small batches is not cheap and Quirky was taking on all this risk for every product it developed through the platform.

What Could Be Done Differently?

Quirky would have been better off as a crowdsourcing platform that simply facilitated product ideation and refinement – no manufacturing and distribution. If I were running the platform, I would have de-risked their operation by partnering with existing manufacturers of the types of consumer products they were making and act as more of an ideation and curation platform for larger companies. For example, if someone had an idea for a new type of connected lamp, the community would refine and prove demand for such a product. Then Quirky would take it to someone like Phillips Lighting who would do final development, manufacturing and distribution. Quirky would still be creating value by crowdsourcing new ideas and capturing value by taking a royalty off products sold or simply selling the ideas to manufacturers.

Student comments on Quirky: A Failed Attempt at Crowdsourcing Inventions