In India, hotel rooms are available almost at every corner. Taxi drivers and auto rickshaw drivers are seen waiting outside the airport or railway station to take you to a nearby hotel. The problem is that these budget unbranded, standalone hotels – have basic rooms, limited room service, and a low staff-guest ratio. There is also considerable variability in the quality of budget rooms in these hotels. OTAs have been able to aggregate and list these hotels on their websites, but haven’t been able to guarantee room standards. Many travelers who booked budget hotel rooms through these websites have nightmarish encounter. Contrary to promises and pictures, guests arrive to dilapidated buildings, leaky washrooms, unclean floors, sputtering air-conditioning, non-acceptance of credit card, and so on.

Ritesh Agarwal looked to fill this gap created by the unreliability of budget hotel rooms. He started OYO, an online, curated, hotel room marketplace that provided reliable and quality budget rooms. [1] He worked to build a trustworthy brand that provided customers with a reliable stay experience at a reasonable price leading to many customers booking OYO during their next trips too. Hotel owners benefitted as there was higher occupancy, a fall in operational costs, an increase in revenue, and more access to a wider set of customers. Hotels that are a part of the OYO network also receive invaluable access to their technology and well-established sales and marketing channels.

Since their debut, they have scaled up quickly with their current annual report showing – 458,000 rooms globally and realised value run rate of $1.8B with a year-on-year growth of 4.3x as of December 2018. [2]

From its early days OYO managed to cause a disruption in the market due to the following reasons:

OYO started by acquiring a part of the inventory in budget hotels. They then audited the property thoroughly using their 150-point checklist. Standardisation across rooms was required to support OYO’s promise of predictability and reliability. A traveler could quickly identify an OYO hotel by their eye-catching OYO branding on the hotel’s exterior.

OYO’s five promises across every room it branded –

While these might be available in most hotels in western countries, in India, these were only available in 3-star hotels and above. Hoteliers were said to make small changes that did not require substantial investment to meet the OYO standards. OYO also partnered with Bharti Airtel to provide a standardized television set with a ‘Direct-to-Home’ connection and free wifi service for all OYO budget rooms at a discount of 30-40%. Owners invested in upgrading the room, improving staff training, and using technology to manage operations. Additionally, adequate staff training and accommodation was required to ensure that they provided excellent customer service. 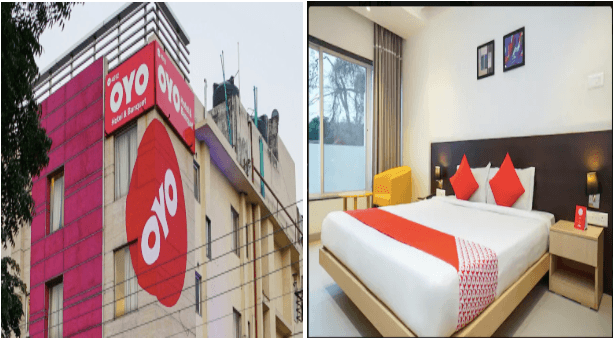 OYO branding on the outside of a hotel and a picture of the OYO budget room.

2. Usage of Technology and Analytics to standardise processes –

Agarwal was convinced that “technology was at the heart of running such a large operation in the leanest possible way.”  It developed an app for customers to be able to book rooms in 3 simple steps. Guests also use this app to place room service orders, to access their billing information and provide feedback about their stay with OYO. 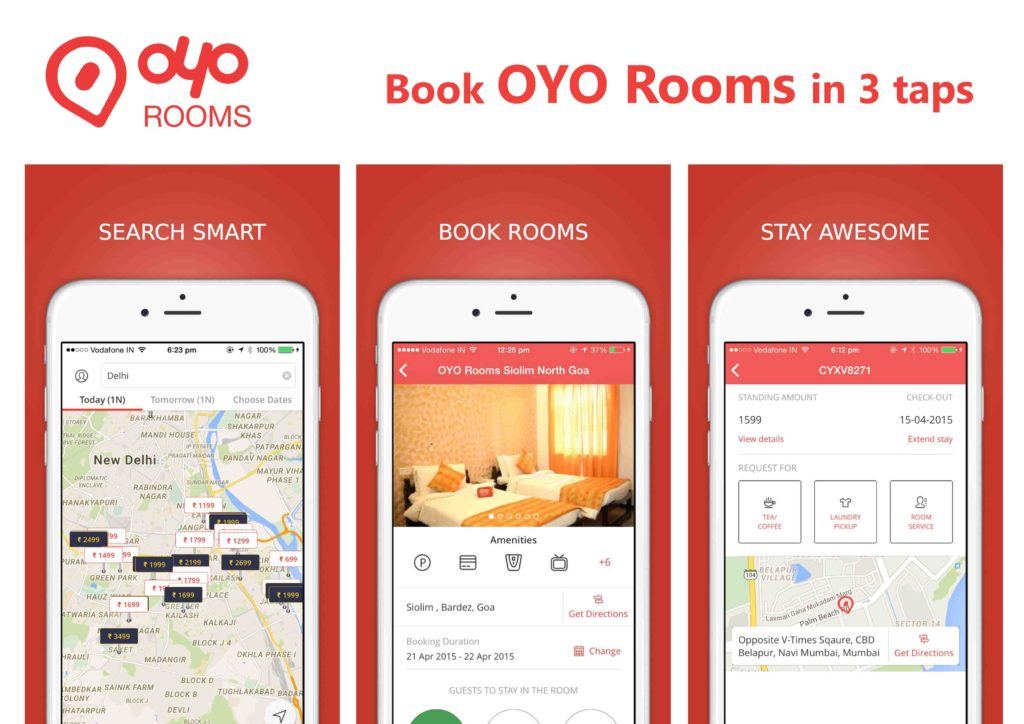 They also have an app for hoteliers and service-staff to ensure efficiencies in the various parts of the process, from back-end reservation management to the front-end management of inventory for furniture and amenities.

OYO ensures that its hotel partners maintain room quality through a strict auditing process. They assigned auditors called ‘OYO Captains’ to conduct a comprehensive check on all the rooms in a hotel. They then sent the data gathered to the analytics team through the ‘Krypton app.’ OYO’s analytics team initially had a colour-coded, real-time occupancy mapping of all the rooms in its network. The colours are indicated below

When the ‘OYO Captain’ visited the rooms, they checked for all the necessary amenities. If any amenities were absent, the room would be immediately colour-coded black. Hotel ranking on the OYO app was then determined by auditor feedback along with customer reviews on the app and social media, room pricing, hotel location, and room supply.

3.  Scaling up without compromising quality–

In a short span of six years, OYO had grown from a few rooms in one property in Gurugram, India in 2014 to 458,000 rooms globally. Their model of standardisation saw the partner hotels experiencing an increase in occupancy rates, indicating to them that the model was successful. This helped OYO scale up quickly. In India, the occupancy rate of a small budget hotel in India typically increases from around 25 percent to about 65 percent within a month after joining, the company claimed. 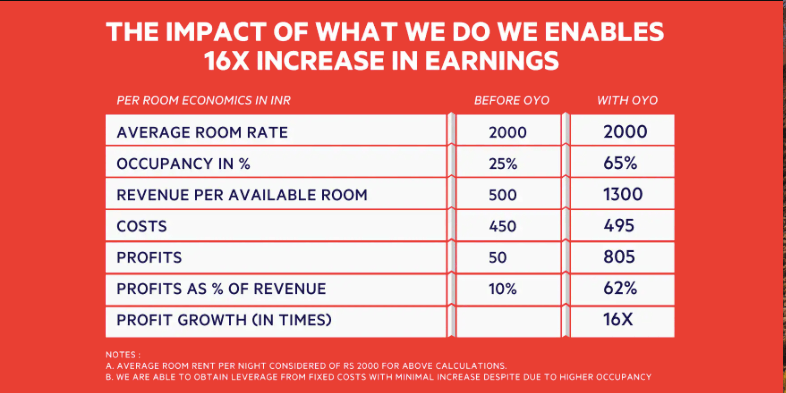 OYO made sure to maintain their four core principles as they continued to grow :

They have managed to scale up with consistent quality by holding their core values close, creating a predictable stay at a budget hotel, and using technology to standardise the process.

OYO is surely ticking all the boxes when it comes to catching attention and staying in the news. It is expanding like never before, getting into different geographies (US, China, Europe, Japan), and venturing into new areas (co-working, vacation rentals, managed homes, weddings, coffee chain). [5]

The major challenges faced by OYO are:

It will be interesting to see if OYO will continue to flourish or if they will face some serious challenges as faced by many other platform models.