Unilever, a company for shareholders and environmentalists alike?

When Unilever’s CEO, Paul Polman, took the top seat in 2009 he spent a night in the founder’s bed to immerse in the history of his new empire. William Lever had pioneered the paternalistic business model. He campaigned for state pensions for the elderly and even provided schooling, health care and good wages at palm-oil plantations in the Congo.[1] Polman came out of the experience certain that Unilever needed to reconnect with its roots and be a leader not only in the market but also in realms of sustainability – not as an act of charity but because it made business sense. He set out Unilever’s Sustainable Living Plain in 2010 and his efforts have earned him popular support. A survey of “sustainability experts” by GlobeScan, a consultant, done at that time had ranked Unilever first by a wide margin (see chart). Unilever’s plan may also have boosted the company’s share price at a time when its biggest rival, Procter & Gamble, lost its way and ultimately its boss. A more recent look in 2015 showed sales were up 4.1 per cent; operating margins and dividends both rose.[2] 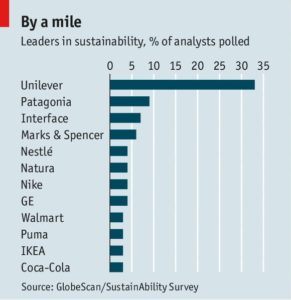 How does Unilever do this when so many other companies are floundering in this area? The company had figured early on that as much as 53%[3] of its sales were derived from emerging markets that are severely impacted by environmental degradation and climate change. And one of the most critical problems brought on by climate change is water stress[4]. As Unilever puts it “We see consequences for our business if we don’t adapt to this new reality. The product categories in which we operate consume more than 90% of the water used at home – from washing dishes to cleaning hair, skin and clothes.” Droughts directly limits the growth of Unilever’s products.

Roping consumers in for water conservation.

Unilever has a history of designing products that consumes less water. In 2012, it launched “dry shampoo”, a cleansing powder combed through the user’s hair. Sales caught on fast, likely boosted by droughts in places like Brazil and California[5]. 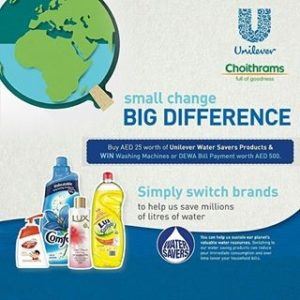 laundry detergent was designed to use less water. Many consumers in India do their laundry by hand. “We had to understand the hand wash process well. We knew we could cut the number of rinses by adding anti-foam ingredients and that would make the lather rinse more quickly. But we also know people like the foam when they’re washing because it signals being clean. So we had to find just the right ingredient that doesn’t suppress lather significantly during the main wash, yet aids significant foam reduction during the rinsing step.”

In 2015, Unilever launched their ‘#1RinseIsEnough’ social media campaign to raise awareness of water wasted through extra rinsing and to promote their efficient Omo brand. Similar products launched in Asia and South Africa have been estimated to save 500 billion litres of water saved per year if used correctly. Unilever’s water-efficient products range has since been expanded to include self-foaming handwash that uses 18% less water and are sold in Argentina, Brazil, India, Indonesia and the Middle East.[7]

The company is a big believer in measuring, monitoring and setting targets for 70 of their largest operation sites, covering more than 58% of its water footprint. Unilever India harvests rainwater at 25% of its factories for crops and manufacturing. Knorr, its soup brand, invested in drip irrigation for tomatoes in Spain and reducing water usage while increasing yields. [6] 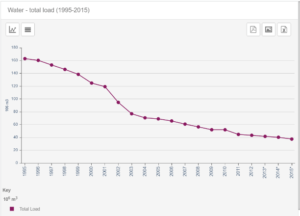 This notion of resource management is so ingrained in the company that it assigns additional cost to water when considering a water-scarce site for new investment.

In 2015, Unilever cheered the completion of its homecare factory in Chengdu, China. The factory is received a Green Building Council LEED Gold Certification in recognition of its sustainability[7]. The facility is capable of 100% wastewater reclamation. It is efforts like these which allows the firm to meet ambitious water reduction targets. (See chart)

When Polman became chief executive, he made known that the company would stop publishing quarterly profit statements, as they discouraged long-term thinking. He declared that the company only wanted investors who shared their view of sustainability being just as important as profits. “If you don’t buy into this, I respect you as a human being but don’t put your money in our company.”[6] When it comes to the environment, few companies walk the talk. Even fewer do so by gaining customer satisfaction and the envy of other CEOs.

Student comments on Unilever, a company for shareholders and environmentalists alike?