With his statement on July 29, 2016, Dr. Thomas Frieden, the Director of the CDC, confirmed what had long been feared—Zika had found its way to the United States1.

First isolated in Uganda in 1947, reports of human illness from the Zika virus remained sporadic until 2007. In that year, an outbreak in Micronesia caused mild fevers in a few dozen people. Then, over the following 9 years, the virus popped up intermittently across several isolated Pacific islands, proving to be little more than a nuisance to those affected. In April of 2015, however, Zika struck again, only this time it was much more infective, and dramatically more aggressive. Starting in Brazil, Zika rapidly spread across South America, leaving thousands sickened for weeks with rashes, conjunctivitis, and severe bone pain. What’s worse, after the wave of initial illness, Zika was linked to a growing incidence of microcephaly and other related birth defects, as well as Guillan-Barre Syndrome, a progressive paralytic condition that, although temporary, leads to death in 5% of cases. Public health officials raced to stem the spread of Zika, but it outpaced their efforts in the Caribbean before making landfall in Miami in the summer of 2016.

While it remains uncertain why Zika suddenly became more virulent, its spread to new regions of the world is intimately tied to the effects of global climate change. The virus is primarily spread by the Aedes aegypti mosquito. Preferring hot, humid environments, Aedes aegypti has historically been contained to tropical regions of the world. With changing global climate though, its habitat has expanded into more temperate zones in Europe and North America2. In fact, mosquitos capable of transmitting Zika have recently been found as far north as Washington DC3.

Considering that the trends in the global climate are likely to put an increasing number of people at risk of infection, it is imperative that public health officials exhaust all resources at their disposal to halt the spread of the disease. With an effective vaccine unlikely to reach the market for years to come4, the most effective current weapon against Zika remains mosquito control. Thus, municipalities across much of South Florida have invested heavily in insecticide spraying programs. 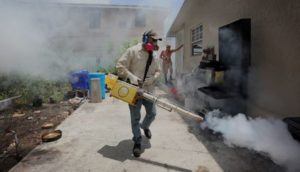 There are dozens of chemical compounds on the market that effectively kill adult mosquitos. However, one agent in particular, Dibrom—produced by AMVAC Chemical Corporation, a $400 million agricultural-chemical company out of Los Angeles, California—has been widely used by public health officials given its relative safety and ease of administration5,6. With Aedes aegypti mosquitos likely to spread further into the American heartland in coming years, AMVAC must carefully consider how its business should adapt to the opportunities and threats of climate change.

Market demand for insecticides that are easy-to-spray, non-toxic, and effective is likely to increase in the future. AMVAC stands to primarily benefit as Dibrom is the most used agent on the market. Additionally, Zika virus and other vector-borne diseases stand to increase in incidence in the United States, and the public is likely to demand additional agents to kill larval mosquitos and other pests, like ticks and fleas, opening new potential markets for AMVAC.

The continued use of Dibrom is by no means certain. Currently, Dibrom is classified as a “Restricted Use Insecticide” granting access only to governmental agencies7. While public health organizations across the world sprayed millions of pounds of Dibrom in the last year alone, its use has come under scrutiny.

Dibrom is sprayed as an “ultra-low volume fog” in which droplets are aerosolized and diffuse through the atmosphere. This formulation is difficult to target precisely, and Dibrom can accumulate in the environment where it is toxic to numerous plants and animals. Dibrom also breaks down rapidly to form dichlorvos, a known carcinogen linked to birth defects. These environmental and health concerns led hundreds of people to protest the use of Dibrom in Puerto Rico, even as that country was reeling from a massive Zika outbreak8. More recently, aerial spraying of Dibrom has been linked to the death of millions of honey bees in America9. Given a public that is increasingly aware and proactive about environmental and ecological damage, AMVAC should be wary of how Dibrom is used and perceived.

What AMVAC Should Do:

AMVAC recently expanded its production capacity of Dibrom and should continue to forecast future demand to ensure that it can supply its market. AMVAC should also boost R&D to improve upon the current formulation of Dibrom (aiming for increased stability, improved effectiveness, and reduced toxicity) and to create new and complimentary products. Additionally, AMVAC should pursue relationships with regulatory agencies to ensure that the use of Dibrom is secure in the future, and to push for greater access of Dibrom among private companies.

Unilever, a company for shareholders and environmentalists alike?