UPS is the world’s largest package delivery provider[1]. The operation has a scale beyond imagination: it delivered 4.7 billion packages in 2015 alone. It has a dedicated air-cargo fleet that covers almost 2000 daily flights, a ground delivery fleet of 110,000 vehicles, and it is present in 220 countries[2].

It is widely known that the transportation & logistics sector is a major source of global pollution, accounting for about 14% of all anthropogenic greenhouse gas (GHG) emissions[3]. What is probably not widely known, however, is that UPS has the 2nd largest GHG footprint sector[4].

Climate change poses a major threat to UPS. The biggest one is the reduction of net income that the company faces in the wake of existing and potential regulation. Taxes, or other schemes to disincentivize use of fossil fuels, will result in increased prices of this resource.[5] Moreover, regulation is also in the works to reduce operating emissions of logistic companies both in the US[6], and internationally[7]. This will result in higher delivery costs, which will translate to higher prices and lower demand for services.

A second, and less obvious threat, is the impact of warmer weather. Higher temperatures affect the 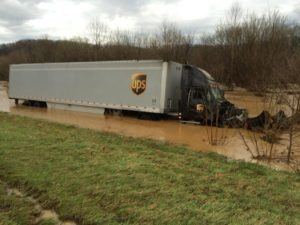 operational performance of the air-fleet, since aircraft payload is reduced with higher temperatures. Moreover, warm weather can result in the buckling of roads, railways and bridges – infrastructure critical for delivery operations.[8] Last, droughts will also increase, resulting in a higher price of the biofuels on which the company is partly relying on to offset its GHG footprint.

And it’s not just temperature. The increase in violent weather phenomena poses a major operational threat (and cost) to the company. Storms may prevent aircraft from operating, potentially forcing a temporary shutdown of a major distribution center, with disruption cascading across all the value chain. Also, sea-level rise and flooding may result in road closures and inaccessibility of cities, delaying deliveries or even rendering them impossible, while also damaging infrastructure and vehicles.[9] [10]

An umbrella, at least

Sustainability appears to be a core issue on UPS’s agenda, as evidenced by its sustainability governance. The company has an overall plan to reduce carbon emissions 20% by 2020 vs its 2007 baseline, and it had already achieved 14.5% as of 2015. There are two main areas on which the company is working to achieve this goal. 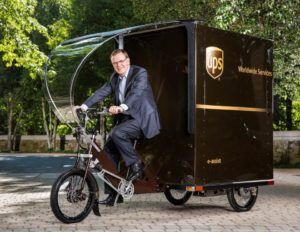 First, is increased fleet efficiency. The company is rolling out ground vehicles that make use of alternative energy. The spectrum is wide, and includes trucks that use LNG or renewable diesel, hybrids, and purely electric vehicles[11]. An interesting example is the electrically-assisted tricycle being tried out in Hamburg[12] (see left). Additionally, the company is working to improve the fuel efficiency of its aircraft. Efforts include retrofits to the current fleet, such as the installation of winglets, and the incorporation of new, more fuel-efficient aircraft. Just this week, the company announced an order for 14 Boeing 747-800’s which is 16% more fuel efficient than the previous version.[13] [14] UPS is also venturing further into technology, trialing Drone Deliveries.

Second, the company is improving its operating efficiency, reducing the number of vehicle-miles required to deliver a package. Chief amongst the initiatives is “Orion”, a proprietary software that optimizes route design for trucks, and will reduce 100 million truck-miles annually. The efforts are not limited to the ground – more accurate flight planning is allowing more direct flight paths and lower separation between aircraft, both of which result in fuel savings.

But… is it enough?

While the company’s efforts are commendable, there is room for improvement. The company’s goal seems small when compared for example with the EU’s goals of 40% reduction vs 1990 baseline by 2030[15]. There are many efforts that the company is leaving off 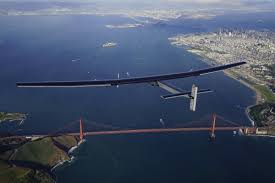 the table, like the use of alternative fuels in aviation, which it has not yet done mainly due to concerns of availability and price.

On a bigger scheme, all attempts described before are incremental, when the world needs step changes. A leader like UPS should make a stronger attempt to leverage new technologies to drive that change. For example, why not increase drone delivery tests? Why not invest to develop solar-powered planes for transportation?

But wait… it’s not just UPS. You and I can also make a difference! UPS claims that next-day deliveries have a higher GHG footprint because they are less efficient. Maybe the next time you place an order you can choose for 5-day ground, help the environment, and save a few dollars… they’ll come in handy next year!

[11] Cathy Proctor, Loveland’s cleantech Lightning Hybrids on a roll with orders from UPS, others, Denver Business Journal, October 31, 2016, via Factiva, accessed on October 31, 2016.

Norway’s love affair with Oil & Gas on the rocks?