Machine learning has the potential to strengthen GSK’s competitive advantage in R&D. The pharmaceutical industry has seen a decline in R&D productivity over the last decades, with increasing R&D spend but a relatively flat number of FDA approvals per year, as shown in the chart below [1]. 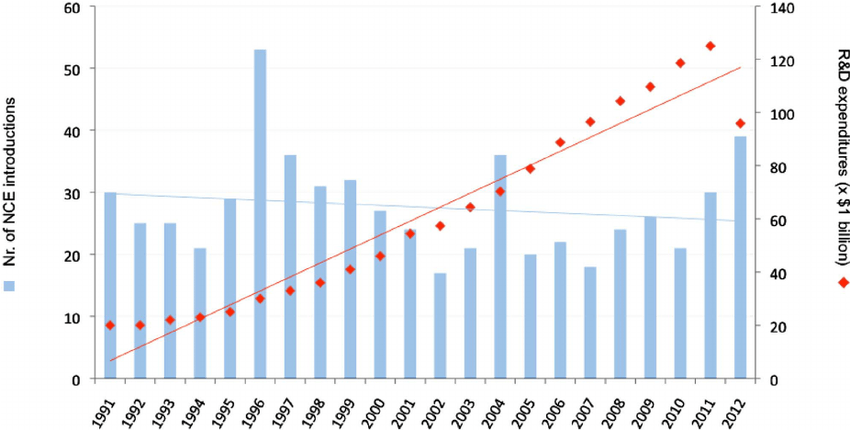 One of the main reasons behind the declining trend is the increased rate of failure of drug development programs [2]. Consequently, it’s critical to GSK’s competitive advantage to limit attrition in its pipeline of drug candidates – and that begins in early R&D, with tasks such as understanding disease pathology, identifying a target and designing a molecule to hit it. GSK’s researchers have made strides towards employing machine learning to support these tasks, for instance using a semi-supervised approach on gene-disease association data in order to predict potential new drug targets [3]. They are also seeking to apply machine learning to analyzing normal vs. tumor-derived genomic, metabolomic, proteomic, transcriptomic and other kinds of -omics data in order to characterize the pathology of cancer, in hopes of finding novel cancer targets [4].

In addition to encouraging internal integration of machine learning into drug product development processes, GSK’s management has focused on partnerships with AI firms. Both of these initiatives are ways for GSK to start exploring the potential of machine learning in the next couple of years, with ramifications that will extend beyond that into the next decade. To help centralize the push into machine learning and related technologies, GSK appointed their first Chief Digital Officer, Karenann Terrell, in 2017 [5]. Around the same time, GSK entered into a collaboration with Exscientia, an AI drug design company, seeking to use AI to design molecules for up to 10 GSK-selected disease targets [6]. Along similar lines, GSK in 2018 entered into a collaboration with Cloud Pharmaceuticals also to design tailored molecules for GSK-selected targets [7]. The two partnerships center around a task that machine learning is well suited for: predicting features of a drug molecule that will make it the best fit for a target, given a large set of previous molecules and targets that matched well together. Thus far, GSK management has done well in applying machine learning to prediction problems (to their benefit), rather than problems centered on causal explanation (which could have been a pitfall).

Looking ahead, there are further actions that GSK management could take in the short and medium terms to fully benefit from the opportunities provided by machine learning technologies. These come in three main categories: (1) acquiring/licensing more data to work with, (2) finding additional areas that machine learning can be useful in, and (3) evaluating the outcomes of initiatives. When looking for more data, GSK might consider investing in a portfolio of many different kinds of sources, including for instance licensing in EMR/claims data or sponsoring new academic initiatives to collect genomic or proteomic data.  When considering additional areas in which machine learning can be applied, GSK must continue to focus on prediction, and avoid issues that center on an explanation of why a result happens. One possible area is the prediction of adverse events from early-stage molecule data, early enough where the design of the molecule might still be modified to alleviate the effect, making it less likely to attrition out during clinical trial testing. Another is prediction of drug response biomarkers, such that GSK can seek out patients more likely to respond well to their drug in clinical trials, raising the likelihood of success and thus making it more likely they can reach FDA approval, at least for treating that patient subset. And finally, GSK needs to create metrics (such as evaluating improvement in attrition rate from preclinical to Phase I) to decide which machine learning initiatives they should focus their resources on.

Although GSK is set to reap significant benefits to its drug product development from machine learning, there are still unresolved issues, namely that it is a “black box”, and no substitute for scientific expertise in explaining the underlying biological mechanism behind why a drug could work. The ability to elucidate the mechanism is also important when filing for approval with the FDA. With that in mind, future discussion might center around the question of, “How can we address the issue of low transparency into why machine learning made a particular prediction?” whether that be for drug targets, biomarkers, or more. (798 words)