The origins of Municipal Solid Waste (MSW) are attributed to the urbanization that resulted from the Industrial Revolution. Epidemics stemming from crowded industrial cities led to political support for sanitation infrastructure that would include clean drinking water and sewage systems as well as the collection and ‘disposal’ of household refuse.1 Fast-forward one hundred years and you find local landfills contaminating the US countryside and contributing to global warming through greenhouse gas (GHG) emissions.

The proliferation of landfills led to a focus on waste reduction and recycling in the 1980’s.  However, MSW management techniques including incineration, compaction, and covering all continue to contribute to GHG emissions. Compaction and covering, for instance, lead to anaerobic conditions that actually increase methane gas emissions per volume. Landfill gas emissions now represent the largest source of GHG emissions from the waste sector and the third-largest source of human-made methane emissions.2 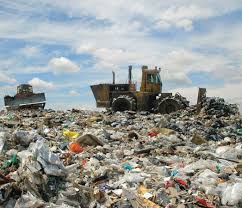 The concept of transforming MSW into energy has been developed through the emerging technology of plasma gasification. This technology can avoid the pitfalls of traditional thermal incineration, and furthermore, the traditional challenges of feedstock inconsistencies that lead to decreased efficiencies have been mitigated through one company’s use of Plasma Gasification technology. 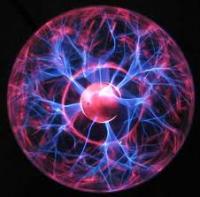 Plasma gasification solution represents a new solution to the timeless problem of waste management.  Plasma is a state of matter that can reach temperatures comparable to those found on the surface of the Sun (2,200 to 13,900 °C).  At those temperatures, organic matter can be molecularly dissociated and complex molecules can be separated into individual atoms.3 In plasma gasification, a plasma arc (similar to lightning) can be produced by sending electrical charges through inert ionized gas. “This extreme heat maintains the gasification reactions, which break apart the chemical bonds of the feedstock and converts them to a synthesis gas (syngas). The syngas consists primarily of carbon monoxide and hydrogen—the basic building blocks for chemicals, fertilizers, substitute natural gas, and liquid transportation fuels. The syngas can also be sent to gas turbines or reciprocating engines to produce electricity, or combusted to produce steam for a steam turbine-generator.”4 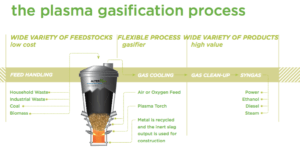 The properties of the temperature and environment can be used to dictate the desired syngas or biofuel.  Dr. Ajay Kumar, Associate Professor of Biosystems and Agricultural Engineering at Oklahoma State University writes: “Gasification has many advantages over combustion. It can use low-value feedstocks and convert them not only into electricity, but also into transportation fuels. In the upcoming years, it will serve as a major technology for complementing the energy needs of the world.”5 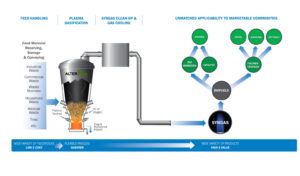 Technical challenges still remain however, specifically with the quality of feedstock that enters the process.  The more inconsistent the feedstock, the more vitrified slag is produced.  Slag, however, is a safe and inert material that can be recycled or used as a building material. However, it will have implications on the economic viability of this technology.  This is where Alter NRG, has a built an advantage in its licensing of Westinghouse plasma gasification technology.  Alter NRG claims that “unlike the typical incineration technology which can process only MSW and similar feedstocks, Alter NRG gasifier can process almost any feedstock including both solids and liquids. Plus, it can process a blend of feedstocks. Project owners can optimize their revenue streams by determining the correct mix of feedstocks based on calorific value and gate fee.”6

While it seems that Alter NRG may have a competitive advantage, the industry as a whole still faces regulatory challenges and has incurred several setbacks in North America.  The first waste-to-energy plant was constructed in Japan over ten years ago, however, critics claim that the technology remains untested, and IEEE cites “low electricity prices, and enduring community opposition to any facility that resembles an incinerator” as having “derailed every proposed project in the United States and Canada to date.” 7  Alter NRG has taken steps to address the opposition, such as incorporating the economic impact into its customer value proposition and operational models.  “Alter NRG delivers a complete plasma gasification solution to its customers, that utilizes its Westinghouse Plasma Torches. With our engineering and construction partners we can design and construct a complete gasification plant, assisting with technical and commercial support during the entire project development process.  Our engineering and construction partners can offer performance guarantees on the entire project facility which truly sets up apart from other earlier stages technologies.”  This effort to overcome the reluctance to treat MSW has been mainly through showcasing the economic benefits. 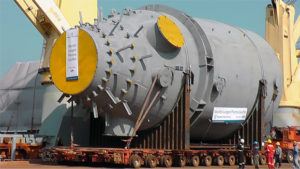 While upfront capital costs of this technology limit its diffusion, I believe that Alter NRG should be looking towards markets where the near-term benefits of energy and water production may be of more value.  I would target developing nations in Africa where energy and water is scarce, fertilizers are expensive, yet landfills are rampant. I can still remember the smell of ash that permeates the air in Uganda and many developing nations as trash burns constantly, or in South East Asia where slash and burn farming techniques dominate the countries’ fertilization tactics.  This can only be achieved through effective partnerships with the nations governments and ministries of agriculture, but unfortunately, these entities have little motivation to change or shoulder the upfront costs.  Additional pressure would need to be placed by the international communities, however, in the meantime, it seems that Alter NRG and the rest of us will remain in a sh***y situation.

Predicting the Weather: Insurers are as good as your local weatherman