The Walt Disney Company has a long history of committing to reduce its carbon footprint to help save the environment. With a growing tourism business in theme parks, there is tension between investing in environmental programs and maximizing profits considering how large the investment would need to be. Mother nature is unpredictable with hurricanes that cause disruption in guests’ vacation plans or damage property.

In 2015, the Mouse announced, “By 2020, Disney will reduce net emissions by 50% from 2012 levels by following the hierarchy of avoiding emissions, reducing emissions through efficiencies, and replacing high-carbon fuels with low-carbon alternatives” [1]. The company’s theme parks and hotels and resorts consume an enormous amount of energy. Just in Orlando, Disney owns 4 theme parks, 2 water parks, and 27 hotels [2]. The four theme parks in Orlando are all in the top 10 U.S. amusement park attendance list seen below [3]. 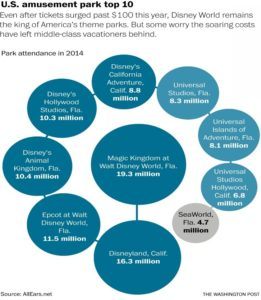 To help in the reduction of demand for energy despite a growing tourism business at Walt Disney World, Disney must look to innovative ways of energy conservation.

Disney has been considering alternative sources of power to move towards energy sustainability. Recently in 2015, Disney has partnered with Duke Energy Corp to use solar polar to produce energy to run its theme parks. The solar facility will be 20 acres with 48,000 solar panels [4]. Angie Renner, of Disney World, states, “this new solar facility will help us in our efforts to conserve natural resources” [4]. 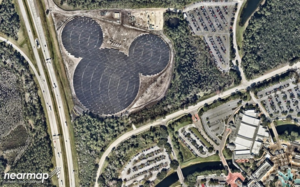 Trash as you might expect comes to the resort’s landfill in large quantities each day. Disney World’s landfill is reserved for 100 tons of solid waste delivered daily [5]. Looking for a solution to keep waste storage and odor to a minimum, Disney partnered with local start up, Harvest Power, to use a portion of their waste to create biogas that is sold back to Disney as renewable energy [5]. Programs like these not only bring distinction to Disney’s environmental programs and commitment, but also help reduce its operational costs. 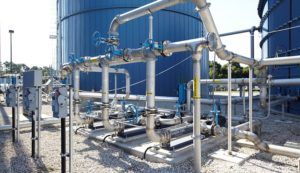 Promoting collaboration and competition among employees to reduce energy costs has been a success. A primary example is the trains in both the Magic Kingdom and Disneyland run on bio-diesel fuel made from recycled cooking oil that is retrieved from each resort’s activities resulting in reducing 200,000 gallons of petroleum diesel used each year [6]. These types of results have increased the employee participation to make real contributions to decrease operational costs. It’s a way to be recognized and install a sense of pride within departments to compete with one another while driving innovative ways to inspire cast members to consider carbon emissions in their day to day activities.

In 2008, Walt Disney World achieved a 100% scorecard for its hotel properties in achieving the Green Lodging Program designation. Governor Crist of Florida said, “I applaud Disney’s compelling participation in the Florida Green Lodging Program. Disney is demonstrating the importance of environmental stewardship to thousands of employees and millions of guests” [7].  How did they achieve this? With 440,000 square feet of conference space and 50,000 hotel rooms, a little here and there goes a long way [7]. Programs such as timers on lighting, figuring out the most efficient use of lighting, a towel reuse program, installing low-flow faucets, and implementing a paper and can recycle program [7].

Given that the Walt Disney World has been around since 1971 and many of the properties are over 50 years old, to achieve a strategy of complete independence on traditional energy sources is not realistic. However, the Company is committed to taking small steps each year to reducing consumption and emissions across all operations. The vastness of the properties means that guests rely on buses to transport them between theme parks. Could Disney expand the monorail between theme parks? An investment in regenerative braking systems would result in 25% savings in power usage [8]. This would be an environmentally friendly mode of transport compared to guests continuing to drive in cars. An extensive monorail system among the parks although is not likely; it would be a long term huge capital investment and would have the net effect of a significant reduction in parking revenue.

Disney has the unique opportunity to influence the next generation of energy consumers as they have world renowned characters – Mickey Mouse, Elsa, Cinderella (the list is endless). This provides a unique opportunity to educate children as to the importance of energy sustainability and conservation. Today, Disney IP is used to teach children to code, why not teach children about climate change? Using a character such as Elsa to teach about the merits of recycling and turning the lights off are messages children will absorb.

Where does Disney go from here?

Hospitality with a side of environmentalism: Shake Shack’s responsible sustainability practices

Student comments on The Mouse Versus Mother Nature