SpaceX is a company born out of an audacious dream- human colonization of Mars. Elon Musk, the Paypal co-founder and Tesla Motors CEO, believes that the permanence of  human race in this universe depends entirely on becoming multi-planetary as soon as possible. Analyzing the situation Musk decided to take matters into his own hands. The cost of launching mass into space had not kept pace with the technological advancements seen in nearly every other endeavor. He set things right by creating a company laser focused on cost reductions with respect to space launch services.

The industry leader in launch capability ULA, a joint venture between Boeing and Lockheed martin, has long profited from cost-plus contracts from the government. This arrangement provides little incentive to lower costs. The payload is often government reconnaissance satellites costing billions of dollars. This meant that whether the launch cost $100 million or $300 million, the total cost to deliver the intelligence capability didn’t change drastically.

Musk made the observation, “Obviously the lowest cost you can make anything for is the spot value of the material constituents. And that’s if you had a magic wand and could rearrange the atoms. So there’s just a question of how efficient you can be about getting the atoms from raw material state to rocket shape.” The raw material costs of a rocket were by his own estimate only 2% of the cost of rocket manufacturing. To this end, the engineering design and manufacturing process was determined to align with this strategic business objective: lowest cost of manufacturing. At SpaceX careful thought was given to how to make each design decision as cost efficient as possible. Instead of opting to use use old proven heritage 1960’s designs and technologies. SpaceX decided to design a rocket from a completely blank slate with the objective of lowering the cost of manufacturing.

Another big piece of lowering the cost came from vertical integration. Over 70% of each Falcon 9 is manufactured or assembled on site in Hawthorne, California. This gives the company huge advantage over competitors that are at the mercy of single sourced rocket assemblies from 3rd parties. It also gives the company advantage when it comes to quality, cost, and schedule control.

Musk and SpaceX operate with the philosophy that simplicity drives down cost and improves reliability. To drive home this point Musk asks whether a Ferrari is more reliable than a Camry or Corolla.  SpaceX pays more than lip service to this idea. Simplicity is king.

First, the every Falcon 9 rocket is designed exactly the same no matter the payload or final destination. The mission could be delivery of telecom satellite to LEO (low earth orbit) or a military satellite to GEO (geosynchronous orbit); regardless, the manufacturing is the same. Second, the fuel tanks for both the first and second stages are identical only varying in length. The first stage rocket and second stage rockets are nearly identical with only minor modifications to optimize for vacuum conditions the second stage will experience.  Giving up perfectly tailored specifications for general purpose and uniform manufacturing has enables SpaceX to go from raw materials to rocket in a very cost efficient manner.

The key to low cost manufacturing for SpaceX is standard components and modular design. The modular design is what allows the Falcon 9 rocket to also serve as the workhorse for the Falcon Heavy rocket. The Falcon Heavy rocket is built from 3 Falcon 9 rockets which means that there are 27 engines lifting a payload as heavy as a fully loaded passenger jet (117,000 lbs) into orbit. This will deliver two times the payload for 1/3 the cost of the current launch offerings.

Imagine how expensive air travel would be if after one flight of a Boeing 777 the plane could never be used again and was only worth its scrap value. That is the current affairs in the rocket launch industry. After delivering their payloads, the rockets fall to the earth. Even if the rockets or their boosters are recovered from ocean, the effect of salt water means that they are worth a minuscule fraction of their pre-launch value. SpaceX is vigorously pioneering technology that will enable rockets to come back to earth and land themselves. This means that they can be refueled, loaded with new cargo, and sent on their way back to space. This would mean that the variable costs would include inspection, light maintenance, and refueling. This could bring the cost of launching satellites down by a factor of 10 times or more.

The company has made multiple attempts at landing their rockets, and they have come very close on two occasions. The current strategy is to land the rockets on floating barges built exclusively for this purpose. The latest news is that the company is seeking FAA approval to try and land their next rocket on land near Cape Canaveral. 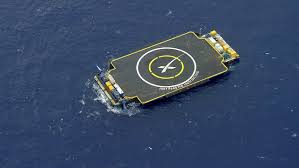 SpaceX was able to reduce the cost to manufacturing a new rocket by 75% relative to the competition. By aligning the design, engineering, and manufacturing processes, SpaceX is able to undercut all other launch providers. The company is generating massive value to commercial customers. The company is poised to really take off when rocket re-usability becomes a routine operation.

Basecamp – Finding Signal in the Noise

Student comments on SpaceX: Bringing the costs of space back down to earth