Launched in 2013, the Dubai Smart City Initiative aims to make use of digital technology and innovation to transform Dubai into one of the world’s smartest cities by 2017. Led by the Smart Dubai Office and its technology arm the Smart Dubai Government Establishment it aims to “deliver world class smart services and infrastructure to create happiness” and focuses on six key pillars: Smart governance, mobility, environment, people, living and economy. While the first four pillars are common around smart cities in the world, Dubai is a pioneer in the last two areas. 100 initiatives and 1,000 related smart services were put in place spanning all governmental entities. 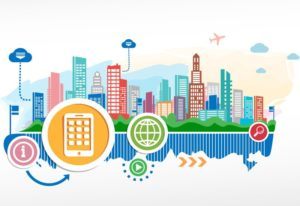 On the smart mobility front, the government’s goal is to incorporate smart technology to make roads safer, less congested and increase the use of public transportation while designing a seamless, and enjoyable user experience with easy access to all public services via handheld devices. The city thus partnered with Cisco to work on infrastructure enhancement projects for a better usage of the internet of everything. One of the completed projects is a centrally operated 75km long metro that required zero drivers to function. The percentage of citizens using public transportation increased from 6% pre-metro to 12% after completion at the beginning of 2016 with a related reduction in traffic fatalities from 20-22 per 1,000 citizens in 2005 to fewer than four per 100,000 at the beginning of 2016. 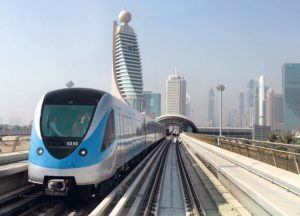 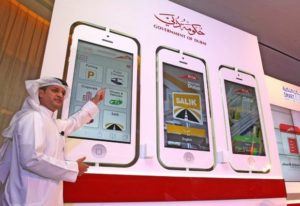 A smart parking system was also put in place to solve a major issue that citizens suffered from daily: wasting valuable time and energy to find parking spots leading to delays in meetings, unhappiness and stress and increased congestion. The new system is helping motorists find parking spots faster, cutting commute times and stress levels while significantly reducing congestion specially in the busy business hubs (studies show that 30% of congestion was caused by people looking for parking spots).  While previously a 15minute drive to a business hub could have taken an hour long distressing meetings new smart services help motorists locate an available parking spot in minutes, or even better book one ahead of time. This system also helped in eliminating one of the major inefficiencies in the real estate market of Dubai caused by old architecture designs where many buildings’ first stories consist of underutilized parking spots. A new online platform was launched to allow motorists to search for available spots in buildings close to their offices and rent those spaces. 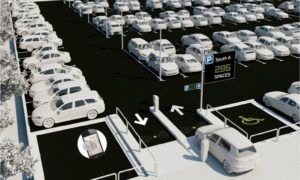 Other initiatives enabled by digitization that were implemented include uniform ticketing system (facilitating the whole experience for end-users and making the whole system fairer) easy payment for public transport (pushing more people to use the public systems thus lowering externalities on the environment), no stop-toll gates (minimizing congestion times specially during rush hours on most demanded routes). Time and cost-savings benefits provided by these solutions are contributing to happier citizens and more efficient commutes. 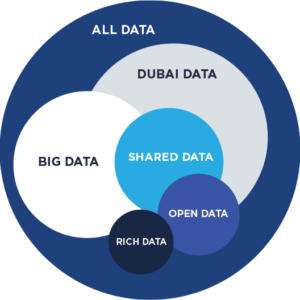 Dubai is continuing to expand their internet of everything initiatives in both the public and private sector with mobile collaboration, city management and smart transmission grids. A law in favor of leveraging private and public sector data to enable data excellence and facilitate the smart city transformation was recently approved. It is the single most comprehensive city-wide data initiative guiding the opening and sharing of city data across the public and private sectors. According to his highness Sheikh Mohammed Bin Rashid Al Maktoum the aim is “not to have the most data, but to unleash the greatest value from data, creating new opportunities and improved experiences for all”. Studies have shown that at the city level data has a track record of generating significant economic impact: cities that have adopted systems promoting open public data report direct impact to GDP of approximately 1%. The Dubai initiative which not only encourage public data openness but also collaboration and sharing data between the public and private sector is expected to generate even higher returns.

“Digital Transformation with The Internet of Everything – 1,000 Customer Stories” Cisco 2016

Just one more mile to go…

Student comments on Smart Services in the City of Dubai