The Walt Disney Company, an iconic staple in American culture, has been able to build an operating model that enables the company to deliver on its promise to customers: “to make magical experiences come alive.”

Overview of the company:

Disney’s Parks and Resorts segment, which represents the core of the company’s business model, includes Disney’s resorts across the globe. The company wholly owns and operates the Walt Disney World Resort in Florida and the Disneyland Resort in California. Outside the US, the company has large ownership stakes in parks in Paris, Hong Kong, and Shanghai (under construction). Disney also earns royalties from Tokyo Disneyland Resort. 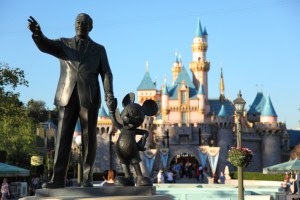 Since its inception, Disney’s promise to the customer has been to “create happiness through magical experiences.” Disney’s parks and resorts deliver an immersive experience, where rides and attractions are integrated with famous stories from blockbuster Disney movies.

Aligning the operating and business models:

With very high expenses (both operating and capital) required to build and maintain such elaborate theme parks, it is critical for Disney to maintain a massive scale at each park in order to be profitable. Luckily, it has been able to do so. Disney operates the busiest theme parks in the world, and by a long margin. In 2013, their 11 parks attracted 132.5 million guests through all parks, which is more than double the closest competitor. Of the ten most-visited parks worldwide, nine are run by Disney.

Scale, however, comes with numerous challenges. As Disney’s success heavily depends on providing customers with consistently pleasant experiences, crowded theme parks and long waiting times pose a serious threat to their product. One of Disney’s most critical innovations, the Fastpass, addresses this dilemma. 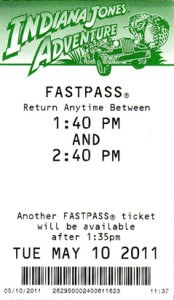 Disney’s Fastpass is a proprietary virtual queuing system first introduced in 1999. Fastpass allows customers to hold a spot in line for a popular ride, but instead of physically waiting in line, they can enjoy other attractions during their wait. Fastpasses are available at no additional cost for park guests.

When customers show up for an attraction, if the “stand-by” line is too long, they can choose to obtain a Fastpass from a machine outside the attraction. The Fastpass will show the time window (usually one hour) at which the guest can return later and use an expedited line to board the ride.

At each attraction that offers this service, a certain number of seats are set aside for Fastpasses everyday, and the rest is made available on a “stand-by” basis. The number of Fastpasses available is then evenly divided into five-minute time intervals. As customers obtain Fastpasses throughout the day, time intervals are depleted, pushing back the return time window. In the case of very popular attractions, such as Splash Mountain, Fastpasses are sometimes “sold out” early in the day, making the “stand by” line the only available options for customers. In most parks, only one or two Fastpasses can be held at any one time by one guest.

Fastpass essentially allows guests to “wait in line” for attractions, without physically waiting in line. This allows Disney to smoothen out the demand for the most popular rides over the course of the day, allowing customers to enjoy other different rides at the park without having to wait egregious amounts of time in lines.

Through innovations such as the Fastpass, Disney has made it possible to consistently provide a quality experience for its customers, while maintaining a scale critical to turn a profit. Delivering on their promise of “making magical experiences come alive” would not be possible without innovating with their operating model.

Target’s failed entry in to Canada