In 2015, more than 500 people reported falling ill from an E. Coli virus outbreak in Chipotle stores. In the wake of the outbreak and smaller ones to follow, Chipotle’s profits have dropped by more than 80% [1], 43 restaurant locations were closed due to the virus [2], and the stock price remains a fraction of its value at the start of 2015. Shockingly, the cause of the outbreak was never identified. This outbreak serves as a salient reminder of the importance of precision and transparency food supply chain, and illustrates how far society has yet to go.

Managing a supply chain for food has never been easy. In addition to traditional supply chain challenges such as poor communication across parties and low traceability of individual items, the food industry faces additional, unique hurdles including high amounts of quality variability across different food items, limited shelf lives, and high-stakes health implications, to name a few. Figure A highlights several the risks incurred at varying stages of the chain. The current system relies on a highly inefficient and manual process: farmers, processors, and distributors work in isolated silos, and most record-keeping is still done on paper or systems that do not speak to each other. [3]  The consequences are staggering. The World Economic Forum estimates that almost 95% of the world’s food waste in poorer countries, amounting to over $750 billion per year, stems from supply chain inefficiencies [4]. 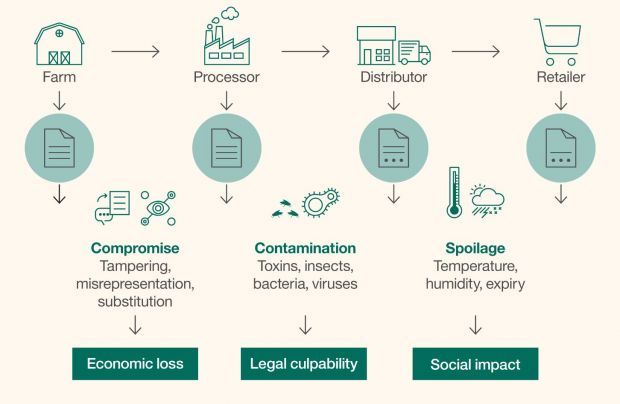 Walmart, IBM, and the Digitization of the Food Supply Chain

Walmart is one of the largest and fasting growing players in the grocery space. Loop Capital analyst Andrew Wolf estimates that the retailer holds a 21.5% market share in the U.S., outstripping traditional grocers’ same store sales by 2.9% in the first quarter of 2017. [5]  Earlier this year Walmart, in partnership with IBM, began leveraging blockchain technology to tackle the complex worldwide supply chain problem. Blockchain, otherwise known as distributed ledger technology, allows multiple parties to securely and immutably record all business transactions, with full visibility for all stakeholders across the network. [6]

Under the new system, blockchain would replace all paper tracking and manual inspection programs. Food products would be tagged on the farm with numerical identifiers, then digitally tracked through each step of the process. Suppliers at various stages of the chain could save processing details, batch numbers, storage temperatures, expiration dates, and more. [7] The result is a simple and effective record keeping system that allows for real-time tracking for all agri-food products, immediate defect detection that can help to identify and isolate potential health hazards, and peace of mind for the end consumer.

In the short term, Walmart has begun two blockchain experiments abroad. [8] The first involved tracking the movement of pork in China, a particularly relevant issue because Chinese agriculture has in recent years gained notoriety for violations of food safety mandates. [9] The pilot project’s results have thus far been heartening; Walmart has reported that it has been able to trace pork products from suppliers to retail and ultimately to consumers. The program’s success in China suggests the high scalability and flexibility of the technology, which was quickly implementable in large wholesalers and small farms alike. [10] The second experiment traced the supply chain of mangoes in Mexico. The time required to determine the origin of any given mango was shortened from almost a week to about two seconds. [11]

In events such as Chipotle’s E. Coli outbreak, the improved turnaround time may mark the difference between a singular contamination incident and viral outbreak. But even beyond health implications, improved efficiency across the entire system could result in less wasted food, decreased fraud, and easier regulation.

Where Do We Go From Here?

Walmart’s results to-date have been encouraging, but not conclusive. If these initial tests are successful, Walmart plans to expand pilot programs to a more diverse portfolio of food items in China and Mexico. [12] While the benefits of digitization in the food supply chain are abundant and clear, Walmart’s management must also consider additional challenges associated with implementing the system at scale. Some key tasks include: gaining cooperation and buy-in from all involved parties, addressing licensing costs and maintenance of the hardware and software needed, and integrating the new processes across a diverse set of IT systems, to name a few.

Moving forward, what additional risk factors would Walmart have to consider when moving all food supply chain transactions to blockchain technology? How should it think about combating these new risks?