Drones to the Rescue

An exciting advancement allowed by the digitalization of supply chains is the use of drones, first developed for military use, to improve delivery times and reduce last-mile delivery costs for corporations and consumers. The most recognized example of this emerging technology is the Amazon Prime Air drone, an iconic quad-copter design that promises delivery of consumer goods within minutes.[1] While the American public eagerly awaits near instant delivery of goods, similar technology is also being harnessed in developing nations for humanitarian and public health reasons.  Zipline is an automated drone company that partners with governments to enable quick delivery of critical medical supplies in Eastern Africa, saving lives and reducing healthcare costs.

Healthcare efforts in the developing world have long been hampered by supply chain issues including inconsistent availability, lack of funding, and spoilage. These problems are exacerbated by a lack of infrastructure such as reliable roads between city centers and regional hospitals and clinics, which increases delivery time and costs. In many nations the onset of the rainy season means that supplies can take days to get from centralized warehouse to the point of care.[2]

Already successfully rolled out in Rwanda, Zipline has taken drone technology and made it more cost-effective and self-sufficient to provide a high-value, rapid logistics systems in developing nations. Zipline has worked with the Rwandan government’s Civil Aviation Administration to use flight and GPS data to allow the drones to self-navigate, without need for expensive sensors.[3] The 40-pound, fixed-wing aircraft are designed to use less power than the more common quad-rotor drones, and can take off in high winds and poor weather.[4] The drones are battery powered and designed to need infrequent charging (once per 1,500 flights) as power is unavailable in many areas whey they deliver. Each drone can carry a 3.5-pound payload up to 45 miles and drop it precisely with a disposable wax-paper parachute, avoiding the need for a tricky landing.[5]

At full roll out, Rwanda alone will have around 30 drones, making 150 deliveries a day of life-saving medical supplies to medical centers across the country.[6] According to company sources, the deliveries, which are paid for by the Rwandan government, are done at cost-parity to truck deliveries, but are delivered via parachute drop in as quickly as 15 minutes.[7]

By keeping supplies of blood and critical medications in regional hubs, rather than in individual hospitals, the drones allow the creation of an agile pull-based supply chain that minimizes inventory costs by reducing spoilage and inefficiently allocated just-in-case inventory.[8] 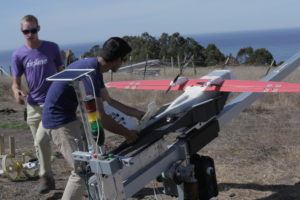 After the success of the initial roll out in Rwanda, the Zipline announced in August that they will also launch in Tanzania in the first half of 2018, where they will serve an additional 10 million people via 1,000 deliveries a day.[9] In the short term, I believe that Zipline should concentrate on continuing to expand efforts in Eastern Africa, where the need for blood and medication is high, and they can test their product with the support of local governments and NGOs.

The long-term economic viability of the model will depend Zipline’s ability to continue to develop their business model and product. While they claim to be on the verge of cost parity with traditional delivery methods, their current efforts are enabled by donations from non-profits and cost isn’t transparent. To scale successfully, they’ll either need to broaden their customer pool by increasing the size and weight of the drone’s payload, or continue to depress manufacturing and operating costs. Additionally, Zipline will need to decide whether to provide the service for a fee, as they do currently, or sell or lease the technology directly to hospitals and health systems.

While the current GPS-based navigation system is low cost it may prohibit the drones from operating in countries with more air traffic or denser populations. Additionally, the range of 45 miles, though sufficient in smaller countries, won’t be sufficient to drive adoption in larger markets such as India.

Are Drones the Answer?

While it’s clear that Zipline’s drones have the potential to help thousands, the question remains whether this is the right place for the Rwandan Government to put their money, instead of investing in infrastructure, or more established life-saving technologies. Even when blood or life-saving drugs are delivered more quickly a shortage of medical professionals and adequate care facilities means that good outcomes aren’t assured. Currently, the authoritarian Rwandan government does not disclose the costs of the program, and some contend it is intended as a PR stunt to distract from human rights and political freedom abuses[10]

A Green Merchant of Death?

The Race to ROI: Can Adidas’s Speedfactory Make Hyper-Customized Sneakers and a Profit?