As the second-biggest international cigarette company (trailing only China National), and with tobacco use the single-largest preventable cause of death globally, Philip Morris International may indirectly kill more people on earth than any other US-headquartered company.[1] Despite investment in so-called “reduced risk products” like e-cigarettes, the $185B corporate home of The Marlboro Man continues to promote cigarette use worldwide (selling 813 billion cigarettes last year), oftentimes through suspect practices like setting up 10-cent cigarette stands just feet away from Indonesian elementary schools.[2] The company has caught deserved negative media attention – in a 2015 “Last Week Tonight” episode, John Oliver devoted 18 minutes to highlighting PMI’s aggressive overseas promotion of cigarettes.[3] With such negative press, however, a second message is lost: few companies are doing half as much to combat the effects of climate change. From broad-based initiatives to incredibly specific local projects at some of their 48 manufacturing sites around the globe, PMI is paradoxically proving that ‘dirty’ companies with major negative social impacts can, in fact, lead in the way in other important areas.

For the past 4 years, Philip Morris International has made The Climate Disclosure Project’s A-List for “comprehensive action to reduce greenhouse gas emissions and mitigate climate change.”[4] In 2016, PMI was in the top 1% of all companies who submitted data, as it was one out of only 25 companies worldwide to earn two “A” grades– one in climate, one in water (2,500 companies reported data to CDP in 2016).[5] The company has committed to reducing its overall value chain carbon footprint by 30%+ from 2010-2020; as of 2016, it is well ahead of target and has already achieved 27% of the stated 30% reduction; 178 projects have been implemented to date with annual carbon reduction of 64,421 metric tons, while an additional 386 projects worth 97,169 metric tons of carbon underway or planned (see Figure 1 for PMI manufacturing carbon emissions by year, 2010-2015).[6] 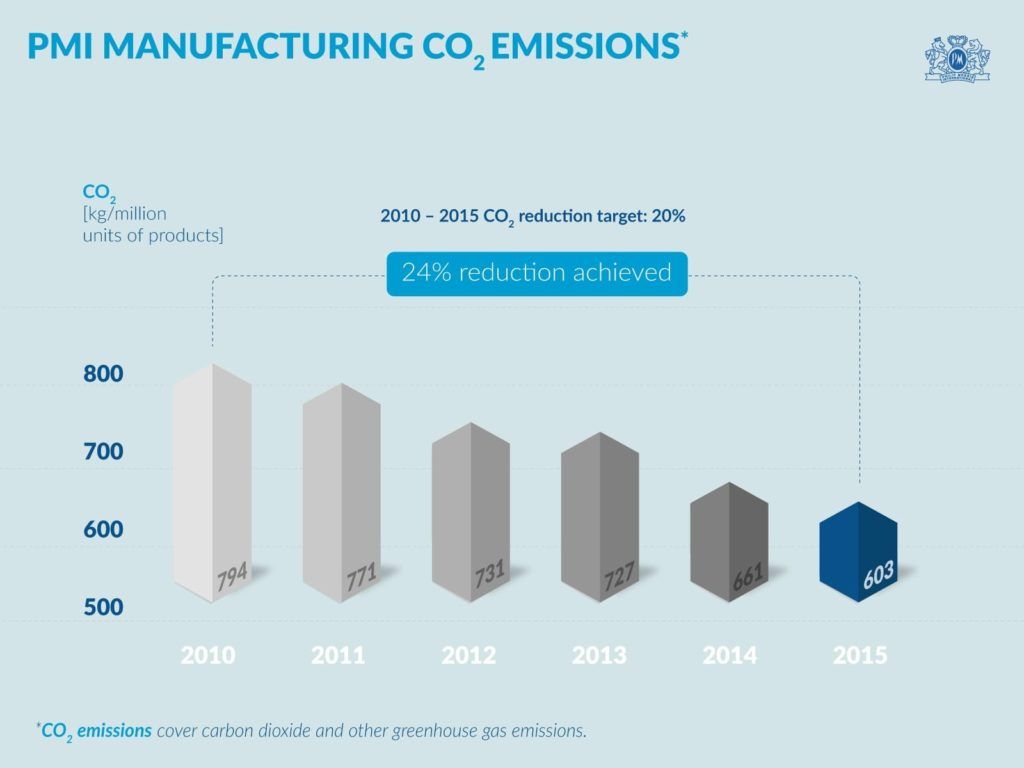 These projects range from the macro (eliminating coal from the curing process globally and procuring green electricity in EU countries) to the micro (e.g., burning rice husks instead of virgin timber in Philippines curing barns).[7] The company’s climate-related goals have science-based targets for measurability, and with the help of Dupont Sustainable Solutions, the company developed its own internal carbon price in 2016 ($17 USD).[8] This price is now used to quantitatively evaluate all proposed projects, making PMI one of the more analytically advanced companies with regard to their climate impact approach.

Why is PMI a climate champion, helping to set the standard for corporate climate change mitigation in the 21st century? A cynical answer would be that this “merchant of death” (per Thank You For Smoking) needs a good message to promote. The positive light from the environmental/climate projects could, in theory, dampen the outcry around a business model premised on supplying deadly, unnecessary products to virtually every country on earth. While PMI certainly is promoting these climate projects, however, the program also simply makes business sense. The company is paying for fewer resources (water, electricity, curing fuel) and workers (79,500 globally) are more productive in healthier operating environments.[9] As a company largely levered to a single crop (tobacco) and with facilities across the globe, PMI is exposed to the effects of the skewed growing seasons and environmental extremes (e.g., drought) associated with climate change.[10] Their resource-dependence mitigation efforts serve to reduce some of these risks posed by a changing climate.

PMI’s actions force us to ask harder questions around which companies are ‘good’ today and how to weigh certain impacts against one another. For example, electric vehicles are often heralded for reducing dependence on fossil fuels, but mining for nickel and cobalt (necessary for lithium ion batteries) results in significant “resource depletion, global warming, ecological toxicity, and human health impacts” (often far from US shores).[11] As with politics, corporate social responsibility (CSR) discourse is too often lacking nuance and acknowledgement of a middle ground. PMI acknowledges climate change, is committed to measurable goals regarding reducing its climate impact, and is a proven leader among large multinational companies in tackling the climate problem head-on. The company should devote more efforts to leading CSR panels, publications, and committees to change the public narrative around the company and spread best practices. They should continue to press on the climate front, proving that organizations can evolve from CSR laggards to leaders, and force a more nuanced debate around what constitutes responsible corporate citizenship. Is setting up kiosks next to schools ever forgivable? No, and PMI should stop these sales tactics. But so long as people in the world are smoking, we’d rather those cigarettes come from PMI’s value chain than anyone else’s. (783 words).

Nigerians Want to Consume More Stuff from Their Own Soil; Can Unilever Make that Happen?

Student comments on A Green Merchant of Death?