The impressive GDP growth of China in the past three decades has come at a heavy cost of environmental degradation. The average air pollution level, or PM2.5, was 80.4 ug/m3 in Beijing in 2015, as compared to the healthy guideline set by the World Health Organization, 10 ug/m3[i] . In response to the environmental challenges, the government is setting aggressive policy targets to reduce energy intensity by 58% from 2010 level, and cap carbon emissions level by 2030[ii].

Not until recently, Beijing admitted the city assumed a drastic economic loss during the 2008 Beijing Olympic Games in exchange of a promised clean air during the 17-day event during which a wide-spread factory shut-down and construction restriction were in place[iii]. Six years later, as the City was pondering over similar air pollution challenges while preparing for Asia Pacific Economic Cooperation Summit, APEC, it consulted researchers at various institutions and companies including IBM on how they can deploy big data analytics, Internet of Things, and machine learning to better manage traffic, production of heavy industries, and other activities in a more economical and scientific way. 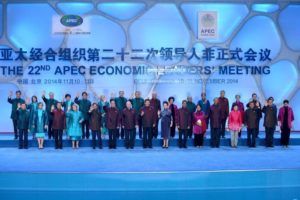 The City was keen on balancing achieving clean air and reducing economic impact. In order to obtain this goal, the City had to know air pollution level (PM2.5) in advance, and propose corresponding regulatory actions before any major pollution events to manage traffic, industry production, construction activities, and many other key pollution sources. In other words, they need a more accurate air pollution forecasting data.

Through working together with the experts from government, the cross-functional team simulated and analyzed thousands of scenarios (50 power plants and 15,000 factories turn off or reduce production, traffic restriction to ~20M vehicles, thousands of construction sites close, etc.) in large scale (200 kilometer surrounding Beijing), and compared the results of various of pollution control actions, which provided strong quantitative analysis support to the government for the scientific policy decision making on the final emission reduction measures.

Digital tools can foster the cities around the world to improve the city’s environmental conditions. Beijing is not alone. In September 2015, Chinese cities pledged to peak their carbon emissions in advance of China’s national target of 2030 at the first US-China Climate-Smart/Low-Carbon Cities Summit in Los Angeles. Digital enablement will be a key component of these cities’ climate change plans to equip them with tools to understand baseline situation, analyze the data on energy and environment, and eventually make responsible decisions in a scientific and efficient way[v].

With the above being said, digital tools are not sufficient alone to solve the environmental challenges. It can better equip authorities such as Beijing with more accurate data to enforce regulations and policies to manage short-term pollution sources, but environment can only be improved through long-term sustainable policy design. Big data analytics and IoT will certainly play a critical role as the cities are battling these challenges. (word count 665)

London City Airport: Please arrive (at most) 20 min prior to departure

It Takes More Than Coins to Change Consumer Behavior