Last week, news broke that the Department of Justice asked Randall Stephenson, CEO of AT&T, to divest either Turner Broadcasting or DirecTV to gain approval for the AT&T-Time Warner acquisition[1]. Although Stephenson claims he intends to keep all assets intact, his ultimate decision will reveal AT&T’s strategic priorities related to the ownership of discrete parts of the supply chain.

In November 2016, AT&T placed a major bet on the future of digital television when the company launched DirecTV Now. Given AT&T’s growing stake in online television and the potential to enhance the customer experience by combining Time Warner content with AT&T’s distribution channels, selling DirecTV for Time Warner would be ill-advised.

AT&T’s business model has evolved since the company acquired DirecTV for $49B in July 2015. The combined scale of the two distributors (+26M subscribers) has given AT&T greater bargaining power with media networks, reducing overall programming costs.[2]

In October 2016, AT&T announced an additional acquisition of Time Warner for $85B. Regulators pushed back, claiming that AT&T’s ownership of the programming and distribution function would put consumers and competing networks at a disadvantage.[3] The transaction, Stephenson argued, was all about the consumer – “from content creation and distribution to a mobile-first experience that is both personal and social.”[4]

Both investments will help AT&T position itself for success as technology shifts viewership habits. In the medium term, AT&T is seeking greater access to consumer insights generated across its digital TV, mobile and broadband platforms to improve execution across the supply chain including content creation and acquisition, addressable advertising and customization of the user experience across screens. [5] In the short term, AT&T is focused on scaling its online TV streaming platform to gain data insights necessary to enhance the customer experience.[6] 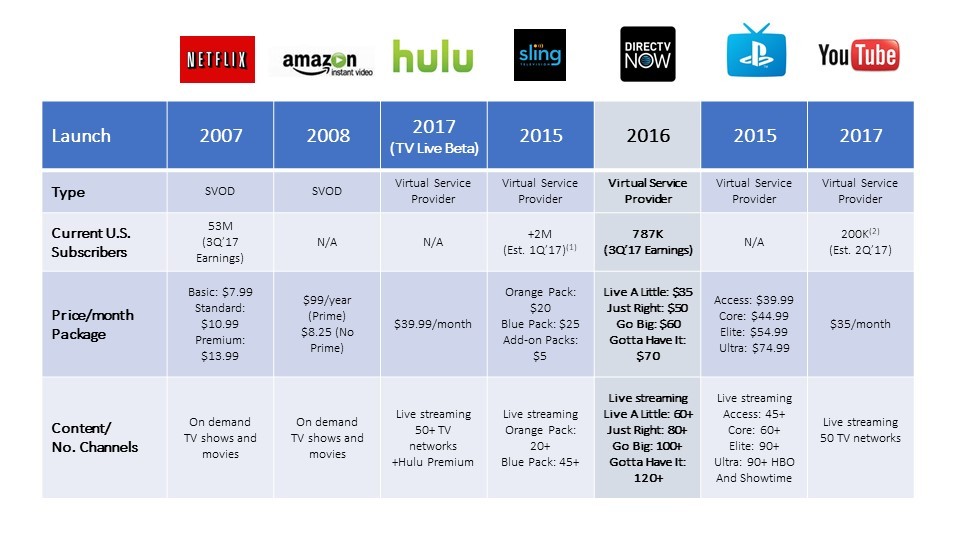 For the past three years, direct-to-consumer models have caused massive disruption across the content supply chain. Historically, studio content was sold to TV networks, programmed to air live, bundled and licensed to distributors and sold as part of a package to cable subscribers (Exhibit 2). Services like Netflix leapfrog the distributor by marketing and delivering digital packages directly to consumers.

In response to the leapfrogging effect and “cord-cutting”[7] trends, satellite TV providers, DirecTV and Dish, launched digital alternatives to their traditional TV packages. Diverging from the “on-demand” model, these packages offer live online television streaming. The downside of offering cheaper digital TV packages is the inevitable cannibalization of traditional, high-margin video subscribers. Regardless, the future of television is online, and incumbents must respond to stay relevant. AT&T had no choice but to enter the digital distribution game to mitigate subscriber losses to Netflix and Sling in the short-term and prepare itself for the future of video distribution, which favors direct engagement with the consumer. 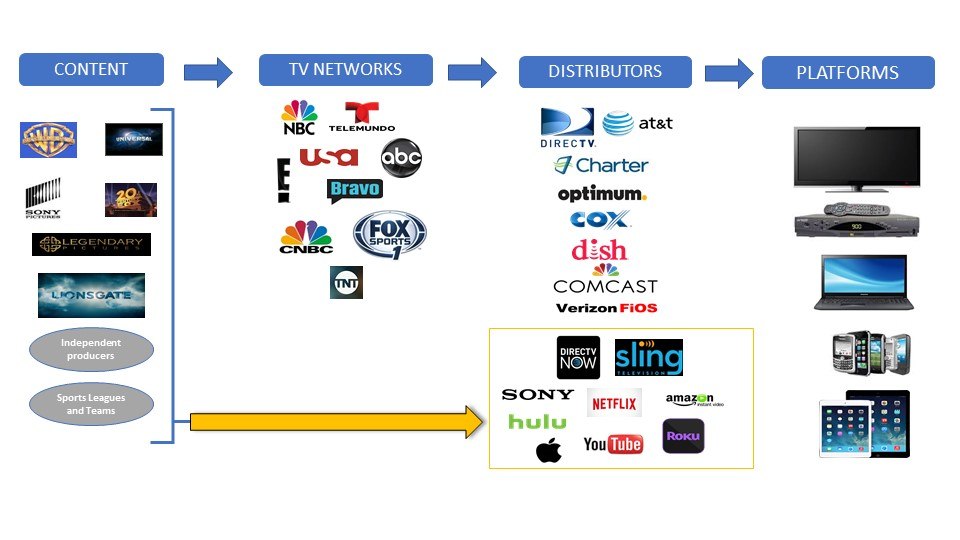 AT&T should abandon the Time Warner merger unless the Justice Department changes its terms of approval (unlikely in current political environment) and select an alternative target that will allow AT&T to enhance its control over the digital supply chain. AT&T should focus on expanding its digital video business and re-assess its programming partners during upcoming negotiations. Remember, many “cord-cutters” were burdened with enormous monthly cable bills for 200 channels when they only viewed 10.

In the medium term, AT&T should expand into other areas of the supply chain by acquiring online content producers and platforms. Big Tech companies like Facebook are quickly gaining traction in the online video space by producing and delivering content to members. Integrating the right digital tech content partner could enhance AT&T’s ability to engage consumers through its existing video and mobile platforms.

How should AT&T respond? Should AT&T consider an alternative target?

Clouds on the horizon? Nestle, climate change, and the future of bottled water.

Admitting cybercriminals to hospital through the front door

Student comments on For AT&T, It’s (DirecTV) Now Or Never