Sub-Saharan Africa, with population increasing to 1.3 billion by 2025[i] and more of those people emerging from poverty,[ii] has become an area of potential for many global retailers. There are many challenges, such as political instability, and unknowns, such as who shops where,[iii] to doing business in Africa. AfricaScan is beginning to tackle the latter issue. 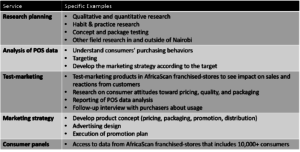 To deliver on its promise, AfricaScan employs people with local knowledge as well as industry and marketing experts with the ability to advise clients to find the key drivers for success of their business in Africa.[v] Further, AfricaScan remains close to the consumers by operating twelve franchised retail grocery stores called Blue Spoon Kiosks, which sell a wide range of products, including food, stationaries, and personal care goods. Store sales range from about $2,500 to $4,000 per month.[vi]

AfricaScan utilizes digital technology to develop its business and operating model through an iPad inventory management app, which records every Kiosk transaction and thus gives AfricaScan the ability to track consumer purchasing behavior. It also helps AfricaScan and each individual Kiosk manage inventory orders. Resulting data includes over 10,000 consumers and gives AfricaScan the ability to know who bought what when, allowing Fukuyoshi and his colleagues to provide meaningful insights to their clients.

Traditional-trade stores in Kenya, including kiosks, sell products without a price tag (i.e., prices can be negotiated), but at the Blue Spoon Kiosks, prices for each product are labeled and usually cheaper compared to other locations in the community.[x] Even fewer stores keep a digital record of purchases, making the Blue Spoon Kiosks collection of every transaction unique.

As a young business addressing this nascent area, AfricaScan has potential for huge growth. Below are additional steps AfricaScan can consider implementing:

As AfricaScan proves its model and guides global retailers to successfully drive business in Kenya, I’m excited to see the company expand into other countries over the long term.

The Beauty of CRM in a Digital Age

From the Hospital to the Home: BIDMC’s app efforts