In 2017, Canyon Bikes, the Germany based bicycle manufacturer will enter the US market for the first time, having achieved 30% sales growth year-on-year over the past six years [1]. Their direct-to-consumer business model has had a transformational effect on both the road and mountain bike industries, bringing elite level components to an audience who have never experienced them before, however their role is not without controversy however.

Dominated by independent one-store companies, local bike stores have been the life blood of the industry, selling whole bikes as well as components, offering servicing to customers and, increasingly in some parts of the world, being hipster hang-outs (as I’ll return to later).

In the USA, companies such as Gita Sporting Goods Inc., who supply Pinerello bikes to the US market, (used by  three times Tour de France winning rider Chris Frome) are responsible for distributing bikes to retail stores, holding larger volumes of inventory than the retailers are able to.

Behind the distributors lie the Original Equipment Manufacturers or (OEMs), such as Pinerello or Cannondale, who act much in the same way as computer OEMs and effectively assemble together components made by separate specialists (for example the Japenese firm Shimano who make a large proportion of all bicycle gears). Other than assembly, the only other role which the OEMs play is the design of the bicycle frame.

With compenents overwhelmingly being made in the far-east (Taiwan alone reportedly accounts for 80% of all high-end carbon fibre frames [3]), agents play a leading role in facilitating the efficient use of factories

Most components are built to generic specifications with only the frame being built to the OEM’s design.

Through the use of digital means Canyon Bikes has been able to vertically integrate downstream, cutting out both distributors and retailers. Their direct-to-consumer business model uses a best in class website [4] as the point of sale, with the company only two physical retail stores, both of which are in Germany. By cutting out two layers in the supply chain through this digital innovation, Canyon are able to deliver bikes with specifications identical to those of other OEM bikes at significant reductions, often thousands of dollars cheaper for high end models. 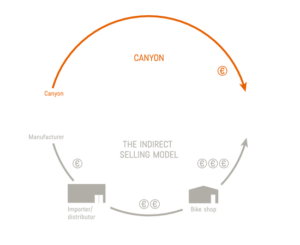 In addition to being able to deliver at a lower price point, the digitally supported canyon supply chain also enables other points of differentiation versus the competition. Firstly, buyers can make modifications to the size of some components in addition to the frame size alone, potentially enabling a better fit for the customer. This is facilitated through a digital tool called the Perfect Position System [6] on the website where riders can input their body dimensions and calculate the best fitting choices. Secondly, purchasers have visibility of stock levels and so can make informed decisions on how long they will have to wait to receive their bikes.

Canyon have also impressively been able to overcome the fact that the digital point of sale prevents customers from ‘trying before you buy’ as is the case in the traditional supply chain. This has been done primarily through two means. Firstly, they have expansively courted the cycling media and have received numerous excellent reviews. Secondly, they sponsor two elite level professional teams, including the Spanish team MoviStar who regularly win many of the sports premier competitions. This link to pro-sports is made all the more real by the fact that Canyon sell bikes which have been used by the pros directly on their website. For instance currently a bike ridden by Nairo Quintana, winner of this years Vuelta Espana, in 2014 is on sale.

Whilst many consumers may benefit from purchasing a bike online from a direct-to-consumer brand such as Canyon, there is also a downside from such a purchase. Many cyclists rely on the regular service of professional mechanics to keep their bike in good, safe condition. However, by taking away the principle revenue source from the bike shops which they will rely on in future, online consumers are causing real headaches. An interesting way which some bike shops are reacting to this problem however is by becoming hang-outs [8] for the cycling obsessed such as me. After all what’s better than to drink coffee whilst reading cycling magazines, surrounded by other bike nerds to the pleasant soundtrack of mechanics doing all the hard work – often much more pleasant than actually cycling!