Blue Bird is the largest taxi company in Indonesia with more than 30,000 vehicles, commanding roughly 50% market share [1]. The next largest player is only one-third its size. It has managed to revamp the Indonesian taxi industry by providing reliability and strong customer service by providing taxi drivers with training and professional development courses [2]. Despite being a traditional taxi company, Blue Bird is unlike its international peers in that it has embraced digitalization, being the first transportation company in Indonesia to release a GPS-enabled app back in 2011 [3]. 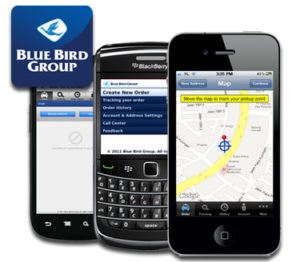 The up and coming competitors: Ride-sharing apps

With a robust economy of 250 million people, Indonesia is seen as a key growth market for foreign ride-sharing companies and homegrown companies alike [4]. Currently, there are three main players in Indonesia: Go-Jek, Uber and Grab.

In terms of scale, Go-Jek is Blue Bird’s biggest competitor with 200,000 riders [5]. However, they are not direct competitors because Go-Jek is an on-demand app for motorcycles. Backed by investors with deep pockets and being Indonesia’s first homegrown unicorn, Go-Jek has been able to expand to 14 business lines (e.g. Go-Food, Go-Massage, Go-Glam, Go-Pay). They recently launched Go-Car (an on-demand app for cars), which encroaches into Blue Bird territory.

While Uber and Grab have been wildly successful in other markets, they have been relatively weaker in Indonesia because they were second movers, had difficulties in complying with local regulations and were less flexible in adapting to the cultural norm of cash payments [6]. However, with aggressive pricing schemes, these companies are also eating into Blue Bird’s market.

Although Blue Bird had the foresight to launch an app relatively early on, they did not market it heavily because it had originally seen the app as “just another platform for customers to reach [their] drivers, just one platform among many others” [7]. Although the majority of rides have come from traditional channels (e.g. street, malls, hotels), Blue Bird expects significant growth potential through the digital platform. Accordingly, they’ve pivoted to dedicate resources in upgrading their app [7]. 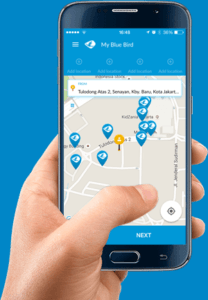 The new app, My Blue Bird, incorporates features that allow customers to track the location of their booked taxi, hosts a ratings system and the ability to make advanced bookings [8].

Despite current preference for cash payments (Exhibit 4), government regulations favoring a move towards a cashless society mean that developing an e-payments infrastructure will be important in the future [10]. Anticipating this shift, Blue Bird has launched a cashless payment system capability in the new My Blue Bird app, while leaving open the option to use cash [11].

Going a step further than discouraging demonstrations, Blue Bird made a strategic decision to enter into a technology, payment and promotion partnership agreement with its rival, ride-sharing app Go-Jek [15]. Specifically, in the short-term, Go-Jek apps will now feature a capability to make Blue Bird bookings and leverage Go-Jek’s Go-Pay payments infrastructure to facilitate more cashless payment options [16]. In the long-term, while detailed plans have yet to be announced, the partnership is expected to yield significant technology advancements in the transportation sector for the greater good of the Indonesian community [17].

Being a big taxi company that has long abided by and lobbied on regulations, Blue Bird now holds an interesting position as both an incumbent seeking to protect traditional taxi companies and a partner of a ride-sharing newcomer looking to support the growth of the ride-sharing economy.

Ride-sharing apps in Indonesia suffer from a lack of stability in regulations: the government has vacillated from banning it one day and reversing the decision the next day [4]. With Blue Bird’s Go-Jek partnership, it has now also become in Blue Bird’s interest to provide more stability for regulations in the ride-sharing industry.

Because Blue Bird needs to balance both interests, Blue Bird could become a highly effective and relatively impartial party to negotiate regulations for the ride-sharing industry. If successful in drafting regulations, this could set a precedent for other countries to follow on how to best regulate this industry, thereby removing any vagueness behind the legality of ride sharing apps.

[6] World Economic Forum, The rise of the sharing economy in Indonesia (2016), https://www.weforum.org/agenda/2016/01/the-rise-of-the-sharing-economy-in-indonesia/

Otto and Uber: Pioneering Autonomy in the Shipping Industry

Webvan’s Demise or When Technology Fails to Meet Operations