The Cloud: High Growth, High Energy Usage
When you stream video on Netflix or pin photos on Pinterest, you’re using infrastructure managed by Amazon Web Services (AWS), a suite of cloud computing services used by many of the biggest companies in the world.  While a minor contributor to Amazon’s total revenue (7%), AWS is Amazon’s fastest growing core business.[1] We can expect this growth to continue as more and more companies push data to the cloud.[2] But expanding of the cloud requires real, on-the-ground infrastructure – data centers that demand large amounts of electricity, making electricity a major cost consideration in AWS’ effort to provide its customers with low cost, reliable computing infrastructure. [3]

Regulatory and PR Context
There are two major drivers for AWS to plan strategically for sustainability: regulation that will drive up electricity prices and demand from their customers who want to see their cloud powered by renewable energy.
First, in the US, the electricity sector is the single largest source of carbon emissions (see chart).[4] 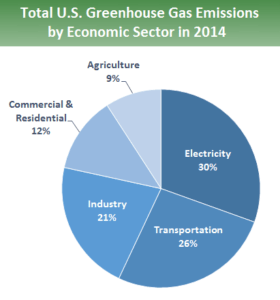 For this reason, the EPA created the Clean Power Plan, a rule that limits carbon emissions of power plants to reduce electric power sector emissions to 68% of 2005 levels by 2030.[5] The rule is currently held up in the courts but is widely expected to survive legal battles. The rule will increase electricity prices in the US anywhere from 3-10%, depending on the region.[6]
Second, Greenpeace has mounted a campaign to encourage data companies to publish statistics on their energy usage and to source energy from renewable sources. In its 2014 and 2015 Click Green reports, Greenpeace gave AWS a failing grade for their lack of transparency and failure to power their operations with renewables.[7] Following the release of Greenpeace’s 2015 report, fifteen AWS customers issued a public letter asking AWS to provide additional transparency about their plan to be powered by 100% renewable energy.[8]

Amazon’s Response
AWS identified three levers for reduced energy usage from their data centers:[9]
1. Reducing the number of servers running by optimizing utilization of each server: When companies use on-site servers, they build substantial excess capacity to ensure that they can meet peak demand. With cloud computing, the contingency needs of multiple companies can be aggregated and optimized, driving up utilization and driving down the total number of servers needed. An NRDC report backs up this claim, showing that the utilization for on-site servers is 12-16% compared to 10-50% utilization for cloud providers.[10] This benefit accrues to the customer and not to AWS, although AWS may be able to capture some of the energy savings in the price of their cloud services.
2. Reducing the amount of energy each server uses: This is achieved by improving the efficiency of lighting, heating, and cooling throughout the data center and reducing electrical losses. AWS should continue to look for innovative ways to drive up the energy efficiency of its data centers – this will both save them money and reduce their carbon emission.
3. Reducing the carbon intensity of the power sources used to power theses servers: In late 2014, AWS announced a goal to be 100% powered by renewable sources. Since then, they have purchased or signed long term power purchase agreements for 727 MW of wind and solar generation projects.[11] These five projects are expected to generate 25% of AWS’ energy needs.

My Take: Amazon is off to a good start, but now is the time to buy wind
I commend AWS’ decision to own wind and solar farms rather than to purchase renewable energy credits (RECs) like some of their competitors. It’s good for business – by owning or entering into long-term contracts, AWS gets low-cost clean power and reduced exposure to electricity pricing, helping them control data center costs. It also works for the environment – because of an oversupply of RECs in the US market, it is very difficult to argue that purchasing RECs actually incentivizes new renewable generation to be built, [12] but AWS’ approach undoubtedly adds additional wind generation that would not have been built otherwise.

AWS still has work to do. Using data on their website, I calculated that they will need to own another 2,200+ MW of wind to meet their renewables goal.[13] They should buy wind now, while it can still qualify for the Production Tax Credit (PTC) before the policy ramps down completely in 2019.[14] The PTC lowers the cost of wind by ~$20/MWh, almost half of the unsubsidized cost of wind. To qualify for the full value of the PTC, projects need to start construction by 2016, so I hope this year will be a big one for AWS in terms of wind purchases – it will help keep their energy costs low and will give their customers additional comfort that their cloud is clean. (797 Words)