While Alphabet has diverse subsidiaries, its largest one is Google, the umbrella company for Alphabet’s Internet-related businesses (see organizational chart). Google.com is the most visited website in the world, and Google the second most valuable brand in the world. 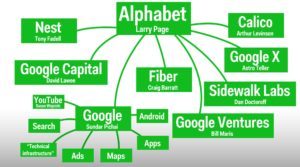 Value capture from data and analytics 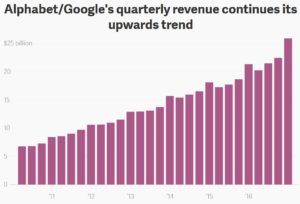 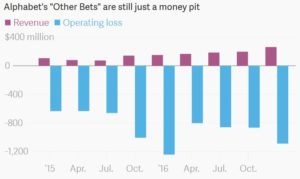 The incredible value of Google’s services lies in the fact that Google can offer nearly all of their services at zero cost to web users, cross-subsidized by Google’s advertising model. Advertisers pay to display brief advertising copies to web users: All ads on AdWords are eligible to be shown on Google’s search engine; furthermore, the Google Display Network shows AdWords ads on content network sites that are not search engines, but websites of owners who wish to make money by displaying ads on their websites. Every time someone searches something on Google, AdWords runs an auction to determine which ads show on the search results page, as well as their rank on the page. The cost depends on bidding strategies, organization goals, and different types of ads (text ads, image or banner ads, mobile text ads, and in-page video ads). Advertisers usually pay when users divert their browsing to click on the advertising copy; an alternative service to pay-per-click advertising is cost-per-acquisition advertising.

Value creation though the usage or analysis of data

For search users, the web search engine Google Search offers results that are superior in completeness, speed, and relevance to those of other search engines. The main purpose of Google Search is to hunt for texts and images in publicly accessible documents offered by web servers, but it also provides the additional features such as synonyms, weather forecasts, time zones, stock quotes, maps, earthquake data, movie showtimes, airports, home listings, sports scores… While not necessarily protected by patents or trademarks, the accumulated knowledge as well as the underlying technologies and computer code have so far proved impossible for its competitors to replicate:

“Crawler” programs, which automatically search the web and download pages to Google data centers, have been improved continuously. Google’s technology in this area, which determines the completeness of search results, benefits from both its greater experience—learning-related proprietary technology—and greater R&D resources.

The “query processor” organizes search results for users. Google began in January 1996 as a research project by Larry Page and Sergey Brin, when they were both PhD students at Stanford: While conventional search engines ranked results by counting how many times the search terms appear on the page, the two came up with a better system to analyze the relationships among websites, PageRank, which determines a website’s relevance by the number of pages and the importance of those pages that link back to the original site (see PageRank scheme). In addition to PageRank, Google, over the years, has added many other secret criteria for determining the ranking of pages on result lists. Because of its greater experience with search behavior and its greater research resources, Google has a significant advantage in customizing the presentation of search results for individual users. And as Google’s share of search queries expands, these advantages are enhanced.

The search service improves not only due to the large number of searches conducted by users, but also because websites optimize themselves to be found on Google searches. Google Search is the most used search engine in the US with 64.0% market share, and the name of the company has become the commonly accepted verb for running an internet search. Because Google’s search engine is ubiquitous, new users are likely to be introduced to it and trained to its use. Portal web sites are also more likely to use Google because of its strong position with users.

Scale is also at work in Google’s advertising network, which delivers advertising relevant to web users based on profiles of their interests. The company’s targeted advertising reach is 92% of all web users in the United States. The more that Google learns about its users through their searches, the better its targeting ability becomes, which is based on extensive response experiences and customized for advertising and individual users: Advertisers enter keywords, domain names, topics, and demographic targeting preferences. Google then places ads on relevant sites within the content network; if domain names are targeted, Google also provides a list of related sites for placement. The steady improvement in these proprietary algorithms over time has led to both increasing click-through rates for Google ads and steadily higher conversion rates for advertisers from clicks to sales, leading to steadily higher key-word prices. In both areas, Google, significantly outperforms its competitors, and the gap appears to be increasing over time.

In addition to the computing know-how, Google excels through the number of data centers and servers, which are the backbone of their operations. In 2016, Google operated nine data centers in the US, two in Asia, and four in Europe. New entrants would have to spend billions to build a comparable infrastructure from the ground up. Last but not last, Google’s engineers and management are highly-skilled, and represent a competitive advantage.

Google’s market share in search and in its Android mobile operating system is so strong that regulation looms as a possible threat to the company’s ability to maintain its strong profitability. Regulators in the US and particularly in Europe are monitoring Google’s business practices for anti-competitive behavior, alleged misuse and manipulation of search results, its use of others’ intellectual property, concerns that its compilation of data may violate people’s privacy, and aggressive tax avoidance.

Another threat comes from potential changes in the behavior of internet users. E.g., Google’s effectiveness would be challenged if social networks became so popular that they curtailed the usefulness of internet searches. Google must remain nimble and prepared to change with its environment to maintain and widen its advantage.

Furthermore, competitive pressures are a threat to Google: With 33.5% market share, Bing is a credible competitor to Google in the US. In other countries, China’s Baidu, Russia’s Yandex, Korea’s Naver, and the Czech Republic’s Seznam are the dominant names. However, Alphabet’s Executive Chairman Eric Schmidt views Amazon as biggest competitor, esp. in product searches. Facebook is king when it comes to driving traffic to a website as part of a news cycle, and takes a large part of the companies’ online advertisement budget. This creates an enormous amount of pressure on Google from a search quality perspective, but also keeps Google from going too far with commercialization of the results.

Eric Enge (May 24, 2016): Competitive threats to Google, and what they mean for you. http://searchengineland.com/competitive-threats-google-means-249772

Mike Murphy (Jan 26, 2017): Alphabet had a massive quarter—but Wall Street is still not sold on its future. https://qz.com/895871/alphabet-goog-had-a-strong-2016-fourth-quarter-thanks-to-google-but-its-other-bets-did-not/

Google AlphaGo: How a recreational program will change the world

Student comments on The broth in Alphabet’s soup is data