Rolls Royce, one of the world’s manufacturer of aircraft engines, is using big data in innovative ways to create value in in the design and manufacturing processes of its aircraft engine division. It has algorithms that crunch terabytes worth of data to generate predictions into when equipment will fail as well as identifying design flaws without ever having to build a prototype. It is creating a new standard in heavy industrial manufacturing (an industry generally resistant to major innovations) that others will have to follow if they want to compete in the new digital era. (1)

Rolls Royce has sophisticated models to simulate engines during the design phase to determine how well their product is performing. These models are capable of analyzing massive data sets and converting the results into visual displays that are easy for engineers to glean insights out of so they can refine and improve the design. Value is created here as engineers save massive amounts of time and money by being able to simulate an engines performance before it is actually made. That being said, I don’t think that Rolls has a significant competitive advantage from this, as most of its competitors are doing this as well, so most of the value is likely captured by the customers rather than the designers. (2)

Rolls is increasingly making its manufacturing line “smart” by connecting different manufacturing systems through the internet, allowing them to send information across the line seamlessly. Machinery that needs repaired is able to inform plant engineers. Parts are tracked as they move through the facility and can communicate errors early in the process when they are least expensive.  While using big data in manufacturing and creating a plant based in the “internet of things” isn’t totally unique, it is something that is more cost effective  when the part being made is complex and valuable, making airplane engine manufacturing a perfect fit.

After sales support is an area that I feel truly differentiates Rolls Royce from other engine manufacturers. – every Rolls Royce jet engine that is produced is equipped with hundreds  of sensors that generate massive amounts of real time operational performance data. Through a partnership with Microsoft (2, 3), this data is sent to and stored in the cloud, where it is analyzed through complex algorithms created to detect operational abnormalities that suggest the aircraft is in need of a repair. This is extremely valuable to customers, s realizing there is a problem early allows for an airline to schedule repair rather than have something break down while passengers are on board. At the very least, it saves a lot of money from avoiding delayed flights, and has the potential to avert a large scale catastrophe and save lives. Rolls Royce directly captures this value created by charging customers for the service in its “total care” package.

To develop its big data program, Rolls Royce set the tone by making it the primary focus of its corporate research laboratory in 2013. Additionally, it formed partnerships with several universities all over the world to help develop their models. It is extremely difficult to recruit the top talent in this field as there are many companies competing for it, so Rolls extended its search globally through these university partnerships and by having research centers around the world that would attract local talent. For any major industrial company, implementing innovative new ways to do operate can be a massive challenge, but the entrepreneurial culture of the organization allowed them to overcome this challenge (2).

While Rolls Royce has been really successful with implementing big data in multiple innovative ways throughout its organization, it will have to continue to innovate if it wants to differentiate itself from its competition. Any competitive edge it gains will likely quickly be evened out as well funded competitors like GE Aviation follow suit. 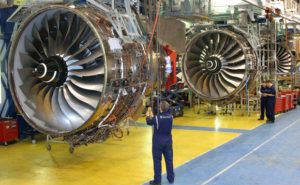 Opower: Harnessing the Power of Data to Save Energy