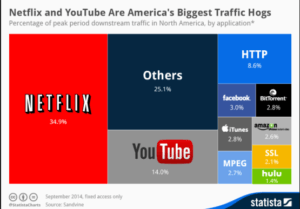 Netflix has successfully disrupted not one but two industries. When Netflix was founded in 1997, it was only a “DVD by Mail” rental service. The value proposition did not challenge movies and basic/cable television like today but rather business like Blockbuster, the ubiquitous and popular video rental chain that was forced to file for bankruptcy in 2010. But in 2007, the company entered a new territory entirely by offering streaming services. Suddenly, a huge catalogue of films and television shows were available on demand for a small price.

Today, Netflix is winning by creating value for the consumer who wants to be able to view content in non-traditional and traditional ways. The customer gets a catalogue of film and television, including original premium content, available on multiple platforms at any time with a customized and curated aggregation method by using big data analytics. The following are some examples of what Netflix does to create value for this customer.

It is able to give its customers a highly curated landscape of media, especially with niche original content, for a low price and without having to plan in advance. Furthermore, Netflix has taken advantage of “the long tail” theory, which basically suggests that there is demand for many different kinds of content such that a typical “mass market” retailer would not be able to offer in one place. Netflix can give customers very popular and much more niche all in one place.(http://www.huffingtonpost.co.uk/christopher-goodfellow/netflixs-long-tail-is-for_b_4716228.html) Netflix has also successfully entered different geographies by focusing on local language content for the territory. For example, they offer dubbing and subtitles on most of the content. Additionally, they have as much as 20% of “local language” content available. (https://www.wired.com/2016/04/saw-future-netflix-japanese-reality-show/)

Furthermore, Netflix now competes directly with premium cable offerings like HBO and Showtime by offering their own original content. Their first series, House of Cards, was just the beginning of developing a varied and popular stable of content of their own.

Netflix was one of the first, if not the first, streaming content services to be ubiquitous in availability to reliably across on traditional television screens, computer, and mobile. Though not entirely, it solves for the problem we saw in the Samsung case the other day about a consumer who wants to experience content on any device and time agnostic. Furthermore, it caters to consumers who have completely different media consumption habits than previous generations. For example, the “cutting the cord” behavior in the cable television industry where consumers no longer want to pay for channels they do not use or for live television at all. Netflix offers a solution for customers who choose to go OTT (Over the Top) and depend only on a wi-fi connection.

Netflix’s data analytics and algorithm have been improving over time to make navigating the catalogue much simpler as well customizable. Netflix started working seriously on its algorithm to predict user ratings on films when they announced the Netflix Prize, which gave a million dollars to the team who was able to build something better than Netflix’s software. By focusing on this area very early on, Netflix has been able to help customers feel excited, not overwhelmed, by all the options available. Furthermore, it saves the hassle of “channel flipping” or searching guides when the algorithm is able to learn from a consumer’s viewing habits and suggests new content for the user to discover.

Netflix captures value by charging only 7.99 for streaming a month. This grants the user access to a huge catalogue of streaming content and now downloadable content. They used to focus purely on licensing huge catalogues of content from the available players. However, as they’ve moved from licensee to content creators, they have opportunities to reduce costs of licensing and bargaining as their content continues to succeed. They will continue to capture value by building scale and volume by bringing the same value proposition to global audiences.