From 2010 to 2016, China’s retail sales have grown at a 10.9% GAGR[1] and become one of the largest markets around the world. The growth rate of e-commerce in China significantly outpaced that of traditional brick and mortar retail forms. The e-commerce market reached the scale of 3,809 billion RMB GMV in 2015[2], and is the largest one in the world[3]. JD.com is one of the winners in this sector. 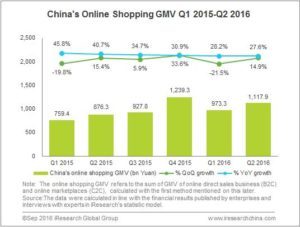 Founded in 2004, JD.com has emerged to the second biggest e-commerce company, following Alibaba, in China, and as of January 2017 its market capitalization reached over $40 billion USD[4]. 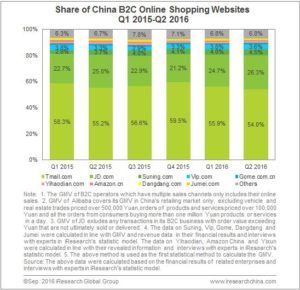 The Story in PC Era

JD.com was originally founded as an online B2C retailer by Liu Qiangdong, transforming from his offline retail business. The company focused on sourcing computers, consumer electronics and communication products (3C) from manufacturers and distributed them online to consumers. Given the relativity high unit price of 3C products, the guarantee of quality through direct sales model differentiated JD.com from Taobao.com (Alibaba), the already established C2C e-commerce marketplace, and equipped the company with a competitive advantage in this category.

In the next few years, JD.com expanded to other product categories such as books and media, baby and maternity, and other general merchandise products. The high quality and authentic products sold enabled the company to win a foothold in this highly competitive industry. The customers JD.com acquired in the 2000’s were characterized as top tier cities’ residents who have higher income and purchasing power relative to that of Alibaba’s (Taobao.com, C2C marketplace; Tmall.com, B2C market place) customers.

To further cater to demands of the company’s target customers, in 2007, JD.com started investing in and operating its own warehouses, logistic centers and IT system, and last-mile delivery capability. In contrast to Alibaba’s logistic outsourcing, this strategic move equipped JD.com to stand out in speed of delivery (same-day delivery in Tier 1 cities) and quality of service.

In addition, the dynamic APP competition on mobile devices, and increasingly more expansive online traffic posted new challenges for JD.com. In 2014, the company established a strategic partnership with Tencent, the biggest tech company in China in terms of market capitalization as of January 2017[6], to keep up its competition with Alibaba. Through the partnership JD.com got a traffic entrance on Wechat, as of 2016 the dominant social media APP in China with over 700 million active users, of which on average 78% spend over 30 minutes everyday on the APP[7]. Furthermore, the company started integrating Wechat’s user data with its own customer purchasing data to serve its suppliers through the company’s newly developed advertisement programed buying platform, aiming at capturing more value from the traffic in this eco-system on the advertiser side. 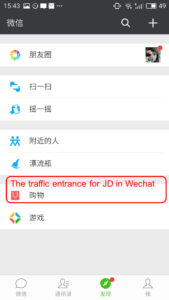 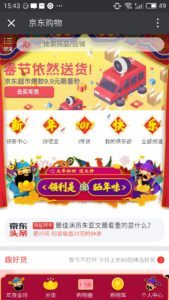 JD Finance, a new subsidiary of JD.com established in 2016, widely caught attentions from multiple stakeholders. Leveraging the company’s e-commerce big data to access risks and preferences, JD.com started to offer supply chain financing to its suppliers, and consumer financing and other financial products to its customers. This new business differentiates itself from Alibaba’s Ant Finance in the sense that it is closer to transactions that are in bigger amount – JD.com has a longer history working with major suppliers in different product categories, and collects more consumer data in high unit price categories.

It will be interesting to see how in future JD.com goes on to evolve, and compete with Alibaba.

Student comments on JD.com: A Winner as E-Commerce Grows in China