Since Bloomberg L.P. launched the Bloomberg Terminal in 1984, it has been the go-to tool for people in the financial industry to access information, analyze data and share findings. 320,000 people around the world pay roughly $20,000 annually to use the Terminal. Despite the steep cost and arguably outdated appearance, most financial firms have Bloomberg subscriptions and continue to rely (albeit begrudgingly) on the tool to conduct business. There’s even a Bloomberg Terminal in the Vatican. How has Bloomberg L.P., the long-time incumbent with a costly and arguably outdated offering, been able to hold its dominant position in the financial data market for so long? I would argue that it comes down to the Terminal’s strong network effects. 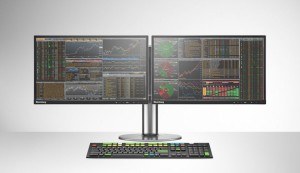 The Bloomberg Terminal (pictured above) is a platform solution that consists of both hardware and software components. The hardware includes the infamous double screens and a special keyboard with shortcut keys and a <MENU> key to help navigate through the software’s many functions. The software, called Bloomberg Professional, allows users to monitor and analyze market data in real-time and trade on the electronic trading platform. The Bloomberg terminal works as a platform, connecting users in the financial industry with information and data provided by 3rd parties. The terminal exhibits both direct and indirect network effects. The direct effects are supported by the terminal’s chat tool, Instant Bloomberg, which allows users to communicate directly and share results in a secure environment (although a couple years ago news broke that Bloomberg reporters allegedly used private terminal data to spy on bank employees). The platform’s indirect network effects are supported by the Bloomberg Open API, which allows third-party apps (e.g. Excel) to access data on the Terminal. Bloomberg also launched its own app store.

Based on what usually happens with software, the Bloomberg Terminal should have been unseated as the dominant player a long time ago:

All of these features make the Bloomberg Terminal ripe for disruption. Yet for decades no other startup has been able to create a comparable offering that can compete seriously with Bloomberg’s platform (although many have tried). Because it was the first mover in an industry with direct network effects, Bloomberg L.P. was able to establish a strong lead against any would-be competitors. And although the Terminal is complicated to use, it is highly sophisticated and aggregates an exceptional amount of data, making it hard for entrants to design a tool that functionally matches up to Bloomberg’s. It’s utility and comprehensiveness have led to the creation of a large installed base of power users that rely on the Terminals to perform their jobs. These exceptionally high switching costs are another reason entrants should be wary. 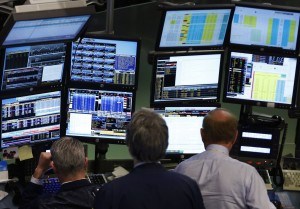 Just this year, however, JPMorgan, Goldman Sachs and 13 other banks announced plans to launch their own messaging service to compete with the Bloomberg Terminal’s chat service. The competing software, called Symphony, is described as a WhatsApp for enterprises. The solution is open source (unlike Instant Bloomberg) and is expected to cost $30 per user per month. If this new Symphony chat service is quickly adopted by employees at the banks that are backing the venture, it could prove to be a major threat to Bloomberg and even force the company to begin unbundling its offerings. While Bloomberg L.P. maintains strong control over its target market, it seems that its own network of users are beginning to turn against the platform and develop their own solutions that are more in line with today’s software and data trends.

GoPro – A Platform Worth $3 Billion

Student comments on Is it looking terminal for the Bloomberg Terminal?