Fitbit is a provider of wearable connected health and fitness trackers, and the company currently enjoys a 77% market share in the full-body activity trackers, according to NPD. Fitbit offers various wrist-based and clippable devices that enables the user to track various activities such as daily steps, calories burned, active minutes and sleep duration. Through real-time information displayed on the device, users can get encouraged to become more active, and users can play around with the data in a number of apps that are connected.

All of the Fitbit devices sync automatically with Fitbit’s online dashboard and mobile apps that provide the users with a wide range of information and analytics, such as charts and graphs of their progress. The platform helps users stay motivated through social features, notifications, challenges, and virtual badges. The users can choose to share some or all of the health and fitness information with friends, family, and other parties with third-party apps.  Fitbit enables third-party developers to create health and fitness apps that interact with its platform. Moreover, Fitbit also offers premium services on a subscription basis that include virtual coaching through customized fitness plans and interactive video-based exercise experiences on mobile devices and computers. 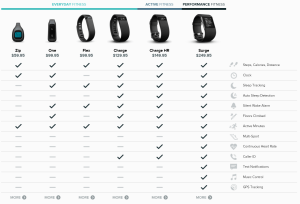 Fitbit is leveraging an increasing trend among users to track their daily movements. Increasingly tech-savvy users wish to monitor their exercise, sleep patterns, nutrition and general well-being and are interested in sharing their performance in social media.

At present, Fitbit generates nearly all of its revenue from the sale of its connected health and fitness devices and accessories (these range in price from 60-250usd). Fitbit generates a small portion of revenue from the subscription-based premium services, however, there is significant potential to grow this piece of the pie as more third-party developers enter the market. Fitbit generated $745 million of total revenues in 2014, up from $271 million in 2013, growing at 175% yoy. 75% of the revenues came from the US business, and the gross margin was an impressive 48%.

Explained simply, Fitbit makes the majority of its revenue from its hardware, however, its ability to provide advanced data and data analysis is the deciding factor behind any purchase. Its ability to keep offering new data sources and new ways to analyze user data is crucial for success going forward. The importance of the software is supported by the fact that two-thirds of Fitbit’s engineers are in software.

Going forward, Fitbit faces huge competition from a number of players, including Jawbone, Nike’s Fuelband and a number of smartphone entrants that can add many of the Fitbit features to its products. However, Fitbit enjoys a strong position in the market and its national-account strategy enabled it to expand distribution fast: Fitbit is now in 30,000 stores in 28 countries.

Fitbit recently did an IPO, and as more data about its users are being made public, questions arise around how they successfully it can convince users to keep using their devices, and perhaps to pay for new features and services. People tend to lose or grow bored with fitness wearables in general, and according to a 2013 survey, one-third of users stopped using theirs within six months. Many industry experts predict that the winner in the space is “not the one that only sells the most devices, it will be the one that persuades the largest number of people to keep coming back”.

Tinder Wants You to Tone Down Your Right Swipes