Cumplo is a platform, founded in 2012 by Nicolas Shea and Jean Boudeguer, which connects private lenders to individuals and small business borrowers. While P2P wasn’t new, it had a huge potential when applied to finance in Latin America, a region where debt is extremely expensive for borrowers (especially when the loan comes from a retailer rather than from a bank). By disintermediating the sector and establishing new forms of trust, Cumplo could bring personal loans to the next level – at affordable rates. 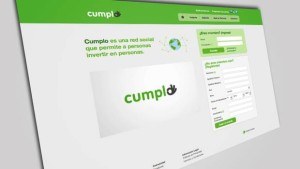 While the idea of giving better credit terms to people seemed necessary in the market, Cumplo suffered legal accusations almost right away. After a few months of operations regulators served it with court papers stating it was violating Chile’s banking law, which stipulates that only licensed banks may accept deposits. The firm explained that it believed it was not breaking the rules, since it did not take deposits per se; it only connected borrowers and lenders. The regulator then passed its case to criminal investigators, who have been probing its operations. Cumplo does not hold any funds and merely acts as a platform for those individuals and entities to meet. While the legality of Cumplo’s model in Chile is still undecided, the company has served as a proof of concept in many ways.

Currently, Cumplo is focused on making loans to SMEs that are 100 percent backed by government guarantees. It is also engaged in factoring activity, allowing investors to invest in credits backed by accounts receivable. Estimates suggest that Cumplo has processed over US$ 55 million in loans over the past three years. In the past 12 months Cumplo has had loan transactions of around US$ 38 million with net internal rate of return (IRR) for investors of more than 11%. These loans are at lower interest rates than the banks and do not have the same onerous fees and general conditions.

Cumplo charges average rates of 20% for consumer loans, 14% percent for business invoice loans, and 13% percent for business working capital. The result of these lower rates and use of a P2B model is that the default rate for Cumplo is less than 1% for business loans, compared to a default rate of approximately 7% in the overall Chilean banking sector. Cumplo has over 1,800 investors and 40,000 users, and averages 13 investors per loan. It has completed over 1400 transactions. In October 2014 alone it completed 87 transactions for a total of US$ 3.5 million in loans. Of that amount, US$ 2.5 million was in short-term loans based on invoices, and US$ 1 million was in government-backed loans for SMEs. As this data suggests, Cumplo is serving an important role in the market, which might explain why they have been awarded with seed capital from CORFO (Chilean economic development agency) and other investors to help support its growth in the country and also their further expansion to Colombia and Peru.

Chilean entrepreneurs remain confident the crowdfunding industry has the potential to grow, while regulators have an excellent opportunity to create a stable and transparent environment in which innovative financial institutions like Cumplo bring valuable financing options to SMEs.