In August 2014, Allison McGuire and Daniel Herrington created an app called SketchFactor that quickly became one of the most popular yet hated apps on the market. SketchFactor’s problem wasn’t poor UI, software bugs, or lack of security; those were apparently fine. SketchFactor’s main problem was how it was used and the unanticipated consequences of crowdsourcing highly subjective data from the general public. You see, SketchFactor was an app that sought to make the streets safer by allowing users to report “sketchy” incidents on a map to warn other users of potential danger. The app’s stated purpose was to empower communities with more information about crime and safety in their neighborhoods. Sounds good, right? “Safety in numbers” and whatnot. Well, it turns out that people aren’t as reliable, impartial, and benevolent as the creators believed because shortly after its launch SketchFactor became a repository of vitriolic, racially-charged, classist, and/or downright imaginary incident reports that tainted the reputation of people and communities across the country. The app became infamous and – despite being at one point the third most downloaded iPhone navigation app (likely due in part to the controversy) – ultimately succumbed to PR hurricane it found itself in. By February, the SketchFactor team saw the writing on the wall (graffiti is sketchy) and decided to pivot. As of today, SketchFactor.com is just a grey screen with the message:

So what went wrong? 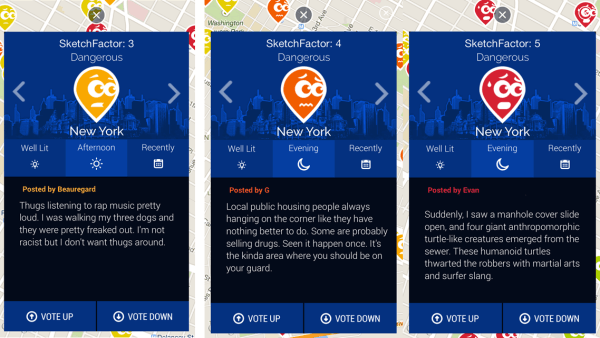 One of the main downsides of crowdsourcing is the risk of relying on (often anonymous) users generating your content, especially when that content is unmoderated. As well-intentioned as the creators may have been, they failed to anticipate and mitigate these risks. SketchFactor exclusively relied on crowdsourced real-time content that it didn’t (and couldn’t) police, meaning anyone could report anything at any time regardless of the report’s validity. As the creators said, “Sketchy means a number of different things. To you, it may mean dangerous. To someone else, it may mean weird.” This subjectivity opened the floodgates for racist, classist reports that accomplished nothing other than tarnishing (mostly minority) communities’ reputations and further alienating the poor. In fact, studies comparing actual Washington D.C. crime data with SketchFactor reports showed few overlaps.

Selection bias often plagues crowdsourcing efforts. Companies must understand and account for th
e fact that their user pool is almost always biased in one way or another and that these biases can confound the data. In the case of SketchFactor, a major source of bias was the simple fact that it was a smartphone app, something only relatively well-off individuals can afford. So while in theory SketchFactor should have allowed anyone to report suspicious behavior, only middle to upper class people had access to the service. When asked about the racial and class implications of the app, the creators answered, “SketchFactor is a tool that can be used anywhere at any time by anyone. The app is not exclusive to privileged communities or tourists. Many of our users experience racial profiling, police misconduct, and harassment. We encourage all users to report this information. In addition, we partner with community organizations to ensure all members of the community have access to this app.” A lofty, but likely unattainable goal.

Could it have worked?

Almost certainly not. Even if the media firestorm hadn’t erupted and done irreparable damage to the brand, at its core SketchFactor’s mission of crowdsourcing community alerts depended on the same technologies and people that were its greatest flaws. Using an app platform allows for mobile, real-time reporting but also requires access to a smartphone. Its best bet would have been to replace “free text” reporting with a set of predefined choices that subtly help would-be reporters assess whether an incident merits posting and prevent rogue users from publishing inappropriate material. This way they could somewhat moderate user-generated content. Even still, SketchFactor was walking on very dangerous ground and things likely wouldn’t have ended well for it.

Fiverr – get anything done with $5

Student comments on Beware of Ninja Turtles on 88th & 2nd