Much has been stated on the collective wisdom of the crowd. Whether it be from Wikipedia to Mechanical Turk, there have been numerous instances of crowdsourcing successes. However, crowdsourcing can lead to significant marketing blunders that can leave organizations in precarious situations, especially when it comes to voting. Much of the time, this is the direct result of internet trolls hi-jacking the crowdsourced voting process. Three examples prominently illustrate this dilemma and serve as future warnings for other organizations.

Durex: In 2013, Durex announced the launch of a rush delivery app aptly named Durex SOS condoms. The app promised to deliver to couples emergency condoms when they need them wherever they are. As part of the launch of the campaign, Durex decided to ask the crowd to vote on which city they would begin the service. Unfortunately, they did not limit which cities would be included, allowing any city to win. This left the process easily susceptible to trolling leading to the city Batman, Turkey winning. What’s even more embarrassing then the fact that the city was chosen given its shared name with a superhero character is that Batman is a small conservative Muslim city (not the ideal market at all for Durex). The campaign was promptly stopped as a result. 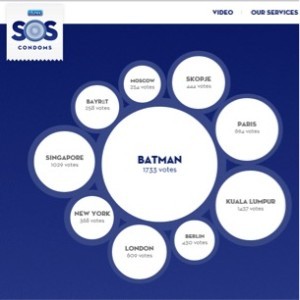 Mountain Dew: In 2012, a local market promotional campaign created by one of Mountain Dew’s customers (Villa Fresh Italian Kitchen) launched the “Dub the Dew” campaign, which encouraged soda fans to submit clever names about a green-apple flavored Mountain Dew beverage. Similar to Durex, the voting competition did not restrict the choices participants could vote for. As a result, the website was spammed by users of message boards like Reddit and 4chan. At one point the most popular name for the drink was “Diabeetus” as shown in the list below. Though not a brainchild of the company itself, Mountain Dew received significant PR backlash and they quickly apologized for the offensive names and pulled down the website. 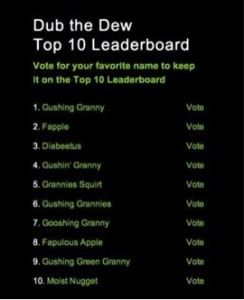 NASA: In 2009, NASA launched a campaign to name Node 3 (a new room in the International Space Station) in order to garner more public interest in space exploration. Though NASA had the foresight to start off with a suggested list of names of their own and screened any potential offensive names (unlike Mountain Dew), TV show host Stephen Colbert quickly hijacked the voting process by encouraging fans to vote for his name “Colbert”. The move worked perfectly as Colbert’s name garnered more than 230,000 votes, which was 40,000 more votes than Serenity (NASA’s top suggestion). NASA ended up not using his name but as a compromise named a treadmill after the comedian.

What Can Be Done: I think there are three prudent ways organizations can control crowdsourced voting in order to avoid having the process get hi-jacked by internet trolls.

1) Set Boundaries: It is dangerous to leave crowdsourced voting open-ended especially when it comes to names. If NASA and Mountain Dew had limited the name options that people could vote for on their sites, then they both would have avoided the blunders they were left in. With regards to Durex, if the company had limited the cities in which participants could vote for, that too would have helped them avoid this problem. Setting boundaries is a very prudent way to limit the impact internet trolls can have on crowdsourced voting.

2) Screen/Monitor: It is very important for these sites to diligently screen and monitor crowdsourced inputs. Foremost, all suggestions must pass a certain level of screening before appearing on the website. That way very offensive and inappropriate names do not make it to the site. Secondly, the process must be diligently monitored in case a certain offensive name slips through the cracks. Screening and monitoring is another layer of defense that can actively limit trolling.

3) Pull The Plug: This is more of a last resort, but if a certain campaign is getting out of hand and hard to control, the prudent thing to do can be to shutdown the campaign entirely. Though not a popular decision as this can lead to PR problems, those PR problems can be a lot worse if the process is allowed to continue unabated.

Crowdfunding in Agriculture: Feeding the World

Genius: Annotating the World, One Rap at a Time