Predicated on the idea that anyone can make the perfect espresso just like those served in the best Italian cafes, in 1987, Nespresso created and dominated an entirely new coffee category, the gourmet single-cup coffee market. The product consists of high quality, individually-portioned coffee in aluminum capsules for use in specially-designed machines, sold at household appliance retailers and the Nespresso shop (See Figure 1a and 1b below). By the 2000s, Nespresso had become Nestle’s fastest-growing product line, growing at 40% annually, and the company continued to expand its coffee expertise by creating unique new blends. Nespresso was regarded as an example of Nestle’s spirit of discovery and ability to innovate and Nestle built a new consumer experience with the unique “razor-razor blade model” for coffee, technology, machine, and capsules. 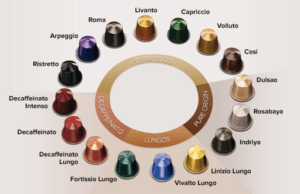 Although Nestle enjoyed its success for many years, its success eventually led to the entry of many competitors in this lucrative single-serve coffee business, where profit margins for one capsule could be up to 50%. By 2012, Nestle dominated the single-cup coffee market with a 34% revenue share (See Figure 2), and chief amongst the competition was Keurig Green Mountain, who had become the dominant player in the North American market. In addition, Nespresso’s patents began to expire in 2012, gradually allowing competitors to release similar machines and capsules. For example, competitors such as Keurig Green Mountain (formerly Green Mountain Coffee Roasters) were releasing their own version of single-serve machines and capsules, while other companies such as Ethical Coffee Company SA and Mondelez International Inc. were producing less expensive capsules that were designed to be compatible with the Nespresso machine. 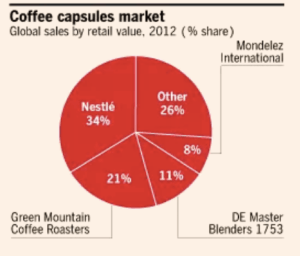 Nestle tried to maintain its grip on the capsule market through the use of its numerous patents and legal action against some of its rivals, but had little success. Furthermore, in 2013, one of Nestle’s patents covering the Nespresso coffee system was revoked, further hurting the conglomerate’s attempts at protecting its brand. As a result of these changes, the Nespresso brand has been losing global market share, by volume, to competitors. Nespresso controlled 11.1% of the global capsule market in 2015, down from 13% in 2011 (See Figure 3). 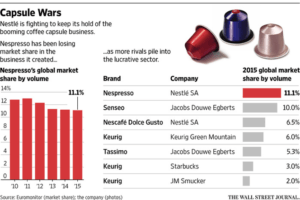 As competitors continued to chip away at its market share, Nespresso has been spending heavily on marketing and R&D to stay ahead, two areas in which the company is known to excel. Furthermore, Nespresso, and Nestle overall, have been increasingly looking for ways to innovate and digitalize the company.

How has Nespresso been attempting to digitalize and transform the company?

Nespresso’s overarching goal, or job-to-be-done (shameless BSSE plug), has always been to deliver the perfect coffee experience. Through its incorporation of technology, it has been able to focus even more on the experience aspect of its products and in recent years, Nespresso has created a transformative experience for its customers. Overall, they have enabled simple digital transactions, drove personalization and customization across channels, leveraged digital media to craft and deliver is brand, and blended digital and physical channels for a meaningful experience.

Below are some of the ways that Nespresso has digitalized the company in order to fight its competition:

However, possibly one of the greatest ways in Nespresso has made strides in its digital transformation is the creation of the Prodigio machine, which makes the Nespresso machine a part of the IoT revolution (See Figure 4). The Prodigio connects the machine to your smartphone via Bluetooth technology and offers additional benefits through the use of its app. The Nespresso app alerts your phone when the coffee machine needs service maintenance or water tank refill and also lets you set a time for the machine to make coffee. Furthermore, the app lets you reorder capsules before you know you need them, allowing you to order with one touch. Because the individual capsules are at the core of Nespresso’s business model, the Prodigio allows Nespresso to go after this revenue. 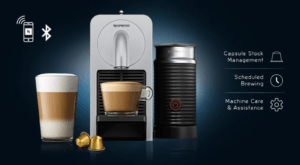 While Nespresso has made many changes to help it survive, still more needs to be done. So far, efforts have been defensive, and now Nespresso needs to take initiative to be more active in its digital transformation efforts. Some steps that Nespresso can take to further its changes include:

Morgan Stanley: Who do you want to manage your money? Robots or humans?

Student comments on Brewing a Successful Future at Nespresso?