I love dogs. My friends would argue sometimes I love them even more than humans – so it’s no surprise that a year ago I stumbled upon BarkPost.com, a BuzzFeed-like website with doggie news and photos, and bookmarked it instantly. What I discovered later, however, was that BarkPost was only one arm of a company on track to have $75 million in revenue. The parent, Bark & Co., encapsulates several offerings: BarkBox, a monthly subscription box with dog toys and treats; BarkShop, an e-commerce site focused on dogs; BarkBuddy, an app to find adoptable dogs, and my bookmark, BarkPost, which is also a top 20 video publisher on Facebook and generates revenue through ads for dog products. Bark & Co. has been a real success story thus far, raising $15 million in Series B funding in 2014 at 10-11 times the valuation of its Series A funding round in 2013. Current investors include Resolute.vc, RRE, Lerer Ventures, Bertelsmann, Vast Ventures, Box Group, Slow Ventures, Daher Capital and CAA. The company has had positive cash flow since end of 2013 and is expanding its business into vet services (BarkCare) and live content sharing (BarkCam).

What is most exciting about Bark & Co. to me (aside from the cuteness overload in all of its websites and products) is its innovative use of canine crowds. The company pays “famous” dog accounts on Instagram to advertise its products, and a community of 400 dogs is now its largest sales channel. For dog owners, being approached by Bark & Co. has become a stamp of approval of the celebrity status of their dog. BarkBox also promotes these dogs on its social media accounts, adding to their celebrity status. Alexis Anderson, Head of Partnerships for BarkBox, summarized Bark & Co.’s strategy perfectly: “What we care about is authentic experiences shared via user-generated content”. The celebrity dog instagram account owners derive pleasure from sharing their experiences with their fans, and this creates a very authentic experience for the viewer, who feels less like he/she is being advertised to. It also helps that Bark & Co. pays the celebrity dog account owners with Bark & Co. products – meaning that these owners actually use the products they are advertising. In addition, the company advertises with the aggregator Instagram account Dogsofinstagram, which has 2.3 million followers and is the most popular dog account in the application. 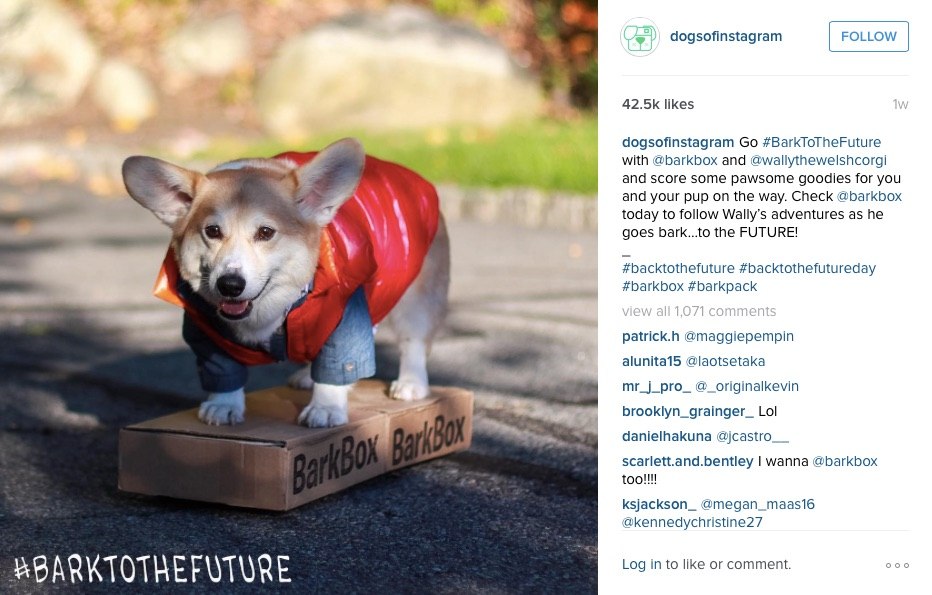 The question for Bark & Co. is how to manage the growth in a sustainable manner such that the company doesn’t get funneled into too many business lines and lose focus. Cofounder and CEO Matt Meeker has so far stated that he prefers to wait until the newer business lines such as BarkBuddy and BarkCare scale up significantly before adding new lines. However, this is proving to be difficult. The company states that on any day there are more than 35 new business ideas in the pipeline, and it will take enormous discipline to follow an integrated strategy amidst this intense drive to grow and scale driven by its VC investors. Already, Bark & Co. announced a relaunch of its ecommerce site BarkShop to include offerings for humans as well as dogs (such as bags), which introduces new companies into its competitive landscape. The company is also dipping its toes into the events business with BarkLive, organizing festivals and “pawties”.

Given the tendency of dog users to multi-home, posting their photos on Instagram and Facebook and other social media sites and using many websites/apps to address the various needs of their dogs, it will be important for Bark & Co. to focus on maintaining its prominence in order to keep its ad revenue on BarkPost and be able to push its flagship product BarkBox. There is a fine balance between addressing several needs of a dog owner in an integrated manner (toys and treats through BarkBox, vet through BarkCare, adoption through BarkBuddy) and losing so much focus that the various product lines end up being subpar, losing the “authentic experience” the company was built on, and turning against the company the crowd that has so far been its unique competitive advantage. It will be interesting to watch whether Bark & Co. will be able to sniff its way through this challenge.

Crowdtesting with Testbirds – leveraging the crowd intelligence for bug-free products