Shopify, a low-key Canadian company, started as a SAS software solution that enables small and medium-sized businesses (SMBs) to create their own customizable e-commerce websites without the need to have any prior development or design knowledge. Today, fifteen years after its founding, Shopify is being discussed in almost every boardroom given its strong dominance in eCommerce and its disruption of industries beyond retail. To put things into perspective, Shopify now powers more than 1 million businesses around the world, has $14.8B in Gross Merchandise Value making it the third largest retailer (after Amazon and eBay), and is now worth $40.3B making it more valuable than eBay.

So what did Shopify do right and has it really achieved the “winner take all” status?

In my mind, Shopify’s “winning” could be attributed to four pillars:

1. Trickling down scale to SMBs:

Shopify has managed to challenge Amazon not by going head to head, but by empowering small retailers and entrepreneurs to take control over their businesses. By removing technical barriers through the provision of affordable and user friendly plugins, Shopify allowed SMBs to go direct to consumer and to build their own brands removing their dependence on a marketplace like Amazon. Solving SMBs’ operational pain points is a great value proposition, but definitely not a winning one as a lot of other companies were offering similar services to SMBs at the time (e.g. Weebly, SquareSpace). What made Shopify competitive is the fact that it achieved economies of scale by combining the sales of its  1M+ small retailers on its platform and used that scale to provide these SMBs with better shipping rates, capital for their businesses, and distribution capabilities.  In other words, Shopify managed to bring in capabilities of giants like Amazon and Target to small retailers revolutionizing the retail industry. 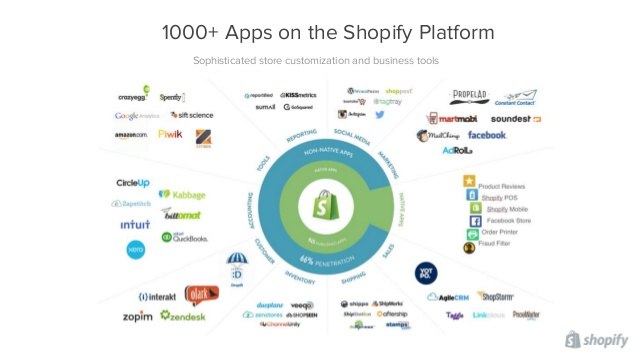 Having thousands of small businesses subscribed to Shopify’s eCommerce platform attracted a new and essential side of the platform: developers. App developers immediately saw the great traction Shopify had with retailers and wanted to benefit from it, so they started developing new applications that retailers could plug in to their Shopify website to help them manage their business. These apps complimented Shopify’s offering as they supported SMBs with inventory management, reporting, accounting, and even marketing. None of this would have been possible without Shopify’s open source Appstore. These “Android-like” network effects between retailers and developers created a sustainable competitive advantage making it very hard to compete with especially that Shopify was the first to create such a platform. Think about it, it is easy to create an open source mobile operating system, but can someone really compete with Android today? 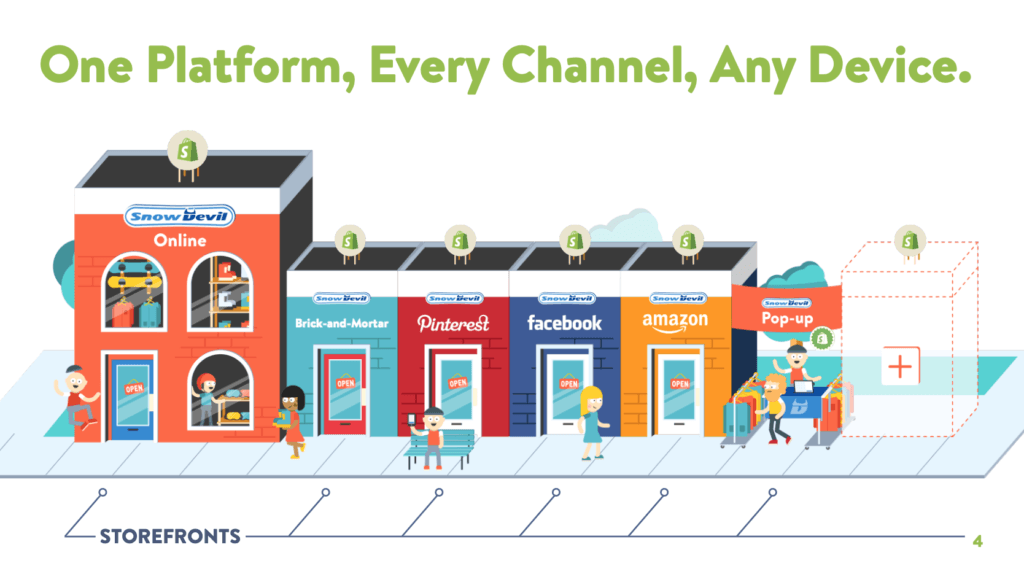 Shopify was one of the first to foresee the omni-channel trend that is disrupting product-based businesses. Today, retailers are selling offline either in their brick and mortar store or in pop-up stores, direct to consumers via their online stores (powered by the likes of Shopify), on a marketplace like Amazon or Etsy, and finally on social media (Instagram and Facebook marketplaces). Shopify (and Square) was one of the first to take advantage of this trend and became the “one-stop-shop” for omni-channel retailers as it connected seamlessly with all their online/offline sales channels synching their cross-channel inventory and providing omni-channel insights. This resolved a lot of complications associated with being omni-channel. For example, when a retailer makes a sale on Amazon, its Shopify inventory would be updated immediately eliminating “overselling” issue. Shopify even introduced its very own POS system to help online retailers go offline which also created a new revenue stream for Shopify (% of merchants’ transactions). So now, Shopify is not only the retailer’s frontend but also its centralized omni-channel backend. Talk about a winner take all!

According to Thomas Epting, an executive at Shopify:

With its Square-like POS system, Amazon-like online stores, financial services-like proprietary payment gateway (which enables multiple currencies), Google-like SEO services, and finally with its newly launched DHL-like fulfillment network that ships retailers’ goods at competitive prices and with bigger geographical reach, Shopify has disrupted almost every industry. Who knows where Shopify will go next in the value chain.

All eyes are definitely on this big giant who revolutionized the retail industry. Could this be a “winner take all” or will other giants like Square and Amazon disrupt Shopify?

Highsnobiety: Writing the Digital Fashion Content Playbook, from the Street to the Runway