Since Amazon launched the Echo smart speaker to the public in July 2015, the Echo family smart speakers have reached an installed base of ~31 million units – comfortably demanding a ~70% market share (with the rest largely going to Google Home) [2].

For consumers, voice assistants embedded in smart speakers create value by providing a more convenient and human-like interaction with technology that save us time. We can in a few seconds say “Alexa, play the new Justin Timberlake song”, instead of having to find our phone, then open a browser to search for the title of the song, close the browser, open our music app of choice, connect to a speaker through wifi, and finally pres play. We can ask “Alexa, when is my wash done?” instead of going downstairs to find out.

Looking back, it’s not obvious that Amazon – an eCommerce retailer (admittedly with strong tech capabilities) – would define the name most frequently associated with voice assistants, “Alexa”. Apple had already integrated Siri with the iPhone 4S in October 2011 [3] and Google had developed Google Now (a version of today’s Google Assistant) in July 2012 [4]. So how did Alexa become so successful? And can it maintain its lead as a voice control platform?

Why Alexa is winning

How Amazon will capture value 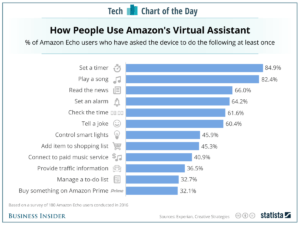