With a long history in South Africa, ABSA has been a notable pillar in the banking industry offering personal and business banking, credit cards, corporate and investment banking, wealth and investment management as well as bancassurance. Founded in 1991, the bank is one of the five largest banks in the country that collectively hold ~90% of market share by assets [1]. Its counterparts are Nedbank, First National Bank (FNB), Standard Bank and Capitec. With a footprint of ~800 branches and ~9,000 ATMs, ABSA reaches 8.8 million customers [2]. To put this in context, the South African population is ~56 million.  Beyond playing a significant role in the provision of financial services, the bank is also a significant employer: through its network of branches, call centers and corporate offices, it employs ~40,000 permanent staff [3]. ABSA is listed on the Johannesburg Stock Exchange.

Having enjoyed a relatively strong position in this oligopoly, ABSA is facing increasing competition from a wave of new financial services players. In particular, digitally-enabled solutions are emerging to provide better customer experience at reduced cost. In 2018 alone, South Africa is set to see the entry of four new players that individually present a significant threat to ABSA’s business model.

Two of the new players, Tyme Digital and Bank Zero are digital-only banks backed by investors with deep pockets and run by teams with significant experience in the banking industry. Tyme is a subsidiary of the Commonwealth Bank of Australia and is 10%-owned by African Rainbow Capital, an investment company launched by South African billionaire, Patrice Motsepe; the CEO, Sandile Shabalala, is an industry veteran having spent 26 years at Nedbank [4]. Tyme aims to focus on low income, underserved consumers. Bank Zero on the other hand, was founded by the former CEO of FNB, Michael Jordaan. Under his leadership, FNB was named the ‘Most Innovative Bank in the World’ at the Financial Global Banking Innovation Awards [5]. The third entrant, Discovery Bank is launching from an adjacent industry, insurance. In an earlier blog post, I wrote about how Discovery has gained global recognition for its shared value wellness program that leverages behavioural economics and data analytics to incentivize health and life insurance members to lead healthier lives. The retail offering will be based on similar principals and will initially be targeted at Discovery’s existing members who tend to be more affluent consumers [6]. The South African Post Office (SAPO) rounds up the group of new entrants. While details of its offering and the extent to which that is digitally-enabled have not been disclosed, it poses a real threat to ABSA in another way. Proposals have been put forward in government for SAPO to operate as a state bank. This would see provincial governments and municipalities ceasing to use private banks and moving their business to SAPO [7].

While the pace of digital transformation has reached an undeniable inflection point, incumbents had already taken note of the trend and begun to incorporate digital innovation in their business models, albeit in a sustaining way. In 2014, ABSA outlined its ‘radical digitization’ strategy. Key priorities under this strategy were: enhancing the online banking and mobile app banking experience; optimizing branch process to move towards paperless transactions; and driving adoption of the ‘Payment Pebble,’ a device which plugs into a cellphone’s headphone jack, allowing small businesses and entrepreneurs to swipe cards for payment [8]. Additionally, ABSA has established a fintech innovation hub called ‘Rise’ that runs a 13-week accelerator program in partnership with Techstars [9]. Compared to the challenges of integrating a startup into a large organization as we saw in the Havas case, this approach leverages the strengths of both partners without disrupting their business models.

In spite of the strategy’s name, ABSA’s ability to fully embrace digital solutions is limited. The bank faces the typical challenges that an incumbent can be expected to grapple with. Firstly, as a public company with pressures to meet analysts’ expectations, the bank would be disincentivized from pursuing strategies that would potentially cannibalise its own revenues. Secondly, Cobol-based legacy systems present a real constraint in upgrading to new technological platforms. Finally, the culture of a large, risk-averse corporation can be a real impediment in the context of digital transformation. Long compliance, legal and infrastructure checklists that are necessary to protect existing customers hinder experimentation and adaptability. In hierarchical structures where tenure is a key marker of respect and people are accustomed to ‘doing things the way they have always been done,’ it is also particularly difficult to drive the required mindset shift.

ABSA faces legitimate challenges however a failure to increase the urgency of its response in this rapidly changing environment could have irreversible negative consequences for the business. While the existing digital strategy is a step in the right direction, additional steps can be taken to become more aggressive.

With mobile increasingly being a key platform for the delivery of digital financial services, there is an opportunity for ABSA to partner with telcos to enhance its ability to compete with digital-only banks. For example, one of Africa’s leading mobile operators, MTN, recently announced a partnership with pan-African banking group, Ecobank, to grow financial inclusion in Africa [10]. Such a move demonstrates how incumbents can collectively leverage their assets effectively respond to startups, who while nimble and adaptable, do not boast the same level scale and brand awareness with customers.

With that said, there remains a need to look internally to update legacy systems. PwC identifies three paths to achievingg this as depicted in the figure below: i) front end only, ii) wrap and digitize, iii) go digital native [11]. ABSA’s existing efforts with its online and app banking falls in the first camp. On the other end of the spectrum, option (iii) would be ideal but does could take years with significant costs. As such, option (ii) provides a happy medium. An Accenture report described how there has been a ‘real growth in technology that allows (banks) to manage those legacy systems in a more aggressive way such as artificial intelligence that interrogates COBOL code and creates digital services’ [12]. 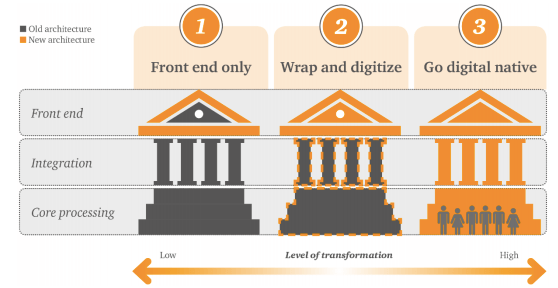 Accenture’s survey also revealed that bankers expected their staff to shrink by 30% in the next three years [12]. Even the jobs that remain will require new skills from staff. While the shedding of jobs can likely not be avoided the labour climate in South Africa requires ABSA to approach this issue sensitively. By proactively enrolling staff in programs that instill new skills, the bank can not only avoid having to undergo a mass overhaul of staff but also play a role in equipping retrenched staff to find better jobs.

The structure of the organization will also need to be considered. “To take advantage of the nimbleness of digital, banks will need to have IT capabilities in each department rather than rely on an IT department charged with competing projects from multiple divisions. [13]” Such a move may threaten the relevance of key individuals who would lose control in such a restructure.

Digital transformation brings both new opportunities and real headaches for incumbents. In order to stay relevant in this new context, ABSA’s leadership will need to courageously tackle the tough decisions, recognizing that there is likely to be a knock to performance as the organization transitions. Transparent communication with key stakeholders including staff and investors will be necessary to get their buy-in and support. While difficult, there is really no other choice if the bank intends to be around in another 20 years.

Will ABSA bite the bullet and get REALLY radical about digital transformation? Watch this space!

[5] FNB named most innovative bank in the world, https://businesstech.co.za/news/banking/23968/fnb-named-most-innovative-bank-in-the-world/

[11] Bank to the future: Finding the right path to digital transformation, https://www.pwc.com/us/en/financial-services/publications/assets/pwc-fsi-whitepaper-digital-bank-transformation.pdf

ClassPass: doomed to be the next Blockbuster?