The geopolitical tides have dramatically turned, with nations eschewing globalization for the more inward-facing stance of isolationism. The effects of this paradigm shift are far-reaching, touching the supply chains of organizations globally. In examining the magnitude of this impact, there is one organization that is facing an existential crisis induced by Brexit – the Smurfit Kappa Group.  More specifically, Brexit is forcing the Smurfit Kappa Group to face some very difficult decisions regarding its supply chain, capital allocation and overall corporate strategy. Yet, management’s current response may not be sufficient long-term when dealing with the global scope and supply chain logistics of the company and a more comprehensive response is indeed merited for the company’s long-term success.

The Smurfit Kappa group is amongst the largest producers of corrugated paper and packaging in the world, with mills throughout Europe and the UK[1]. Because the company sources recovered fiber and containerboard from its mills across Europe, Brexit had the immediate impact of increasing raw materials costs. More specifically, the company saw a nearly 21% drop in Net Income in the first half of 2016, driven almost entirely by a €182MM increase in cost of sales[2]. This profitability decrease was entirely driven by the increase in the price of recovered paper fiber, which is the largest input in the company’s raw material production process. Given the limited supply of European paper mills, which at present time are operating near full capacity[3], and added costs associated with sourcing these raw materials outside Europe, the company faced few alternatives. What is more, on the 2Q2016 earnings call, CEO Tony Smurfit addressed the impact of this increase with surprise, as he had initially argued that “Any effect (of Brexit) on Smurfit Kappa Group will be as a result of the withdrawal having a knock-on impact on UK/European gross domestic product”[4]. While valid, his thesis was largely driven by the observation that the paper and packaging industry tends to track global GDP growth as it is a staple material input in many global businesses[5]. Thus, if UK GDP begins to decline with businesses fleeing, this should impact businesses like Smurfit Kappa that are directly tied to GDP growth. What management failed to anticipate, however, was the additional impact of the raw material costs and currency headwinds.

Fortunately, despite this initial miscalculation, management has taken proactive measures to minimize the economic impacts of Brexit on the company’s supply chain and profitability, since the first half of 2016. Due to Smurfit Kappa’s scale and pricing power, the company has been able to offset the impact of rising raw material costs by increasing the prices of their finished goods to end consumers. Indeed, according to a 2016 Bain Report (see figure below) many UK based manufacturers are expected to offset the increased raw material costs with price increases, in a similar strategy[6]. 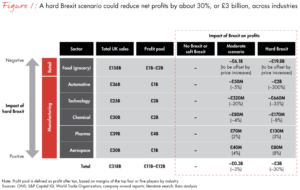 This pricing power was reflected by a nearly €60/tonne increase in recycled containerboard prices (the largest price increase in several years), effective in February of this year. The increase in pricing helped Smurfit Kappa Group return to record profitability, with Net Income rising in the first quarter of this year by nearly 20% despite the increase in Cost of Sales attributed to raw material and input costs. On the earning’s call, CEO Tony Smurfit again stressed the resilience of the business going forward, arguing that further price increases in the next 2-3 years would follow “if and where necessary”[7]. Nonetheless, the company’s absolute reliance on pricing power to offset rising raw materials costs raises some serious questions and concerns about future competitiveness. Particularly in the paper and packaging industry, where gross margins are notoriously low, product differentiation is unperceivable, and consumers are generally very price-sensitive, I am concerned about the long-term (3-10 years and beyond) viability of this strategy as consumers may opt for less-expensive alternatives.

I therefore think the company has to consider several other alternatives going forward to address the potential issues that will arise from its Brexit-induced supply chain disruption. My first recommendation is to invest in lower cost mills throughout Europe (predominantly in the North-West where most corrugated pulp is sourced) and also establish longer-term contracts with its suppliers to lock in lower prices (the typical tenor is 1-2 years). What is more, Smurfit Kappa typically spends around €500MM per year on acquisitions, and it should therefore strategically seek assets that lower its production costs and increase efficiencies in its supply chain.

These recommendations aside, I remain concerned about the long-term competitiveness of Smurfit Kappa in an increasingly commoditized and price-sensitive industry. While their strategy is predicated on price hikes, there is a limit in their end consumer’s flexibility, and I fear this may be coming to a head.

Student comments on “Unpacking the Effects of Brexit on one of Europe’s Largest Paper & Packaging Businesses: The Smurfit Kappa Group.”