Bangkok’s traffic is a nightmare. With nearly 7 million residents, Bangkok is Thailand’s largest city and the second largest metropolitan in Southeast Asia [1]. Despite the city’s enormous population and economic importance, its public transportation infrastructure remains heavily underinvested and inadequate, resulting in serious congestion and chronic traffic throughout the city. [2]

Over the years, many alternative means of transportation have become popular among Bangkok commuters: Tuk-Tuk, water taxi, commuter vans and even three-wheeler taxi! Nonetheless, nothing has become more popular than motorcycle taxi – the fastest and the cheapest mode of transportation in Bangkok. 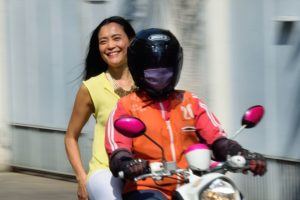 Motorcycle taxis are everywhere in Bangkok, from the city’s most luxurious Central Business District (CBD) to its most rundown, crime-ridden neighborhood. Strictly regulated by the government, motorcycle taxi drivers are registered with the Department of Land Transportation and required to wear distinctive orange jacket as their uniform. Typically, they are organized into a “win,” a group of 20-40 local drivers that autonomously sets price, manages shifts and operates within specific its neighborhood. Because Bangkok lacks integrated and extensive public transportation system, commuters rely on motorcycle taxis to get from home to the nearest train station (out-and-back) as well as to hop between train and bus stations (inter-hub). 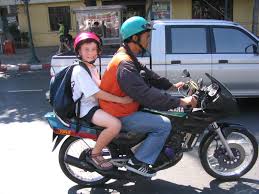 So, what sets motorcycle taxis apart from other modes of transportation? First, they save commuters huge amount of time by avoiding crazy rush-hour traffic. While personal cars, buses and taxis get stuck in traffic for hours, motorcycle taxis manage to sneak swiftly in between cars and trucks stuck at the traffic light. Second, motorcycle taxi ride costs considerably less than other transportation options. With these clear competitive edges, motorcycle taxi wins have become lucrative businesses that employ over 90,000 drivers across Bangkok. [3]

However, motorcycle taxi has one serious drawback: extremely inconvenient and unreliable pickup. Unlike sedan taxis, commuters cannot call motorcycle taxis to arrange for a pickup ahead of time. In most cases, commuters have to hail the motorcycle taxis dangerously on the street and often times walk some distance to the nearest win, which can be miserable in Bangkok’s 100-degree summer or months-long rainy season.

“Motorcycles are part of the commuting culture in Thailand… Uber’s goal is to provide safe, affordable, reliable transportation at the push of a button, everywhere for everyone.” – Douglas Ma, Uber’s head of Asia Expansion [4] 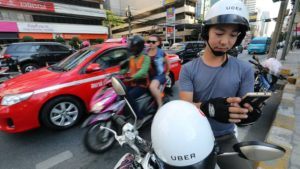 Further, Uber introduced a cash payment option in addition to its traditional credit card payment in order to cater to low-to-middle income commuters who prefer cash transactions. [8] Similar to UberX and UberBlack, UberMOTO enables two-way feedback between riders and drivers, reveals the driver identity to the rider and conducts background check on all of its UberMOTO drivers in order to deliver great customer experience and ensure commuter safety. [9] Uber not only was able to keep UberMOTO’s price point competitive with the tradition motorcycle taxis, but also rolled out aggressive promotions to acquire commuters, offering free rides during promotional week and in certain CBD areas. [10] With its technology, Uber was able to provide a more reliable and convenient pickup, competitive pricing, better customer experience and improved safety as compared to the traditional motorcycle taxis.

UberMOTO’s entrance into the low-to-middle income commuter market increasingly put pressure on the motorcycle taxis’ business model. Following the launch, UberMOTO continued to invest in marketing campaign and successfully attracted commuters to its platform, while benefiting from existing UberX rider base which automatically switches from motorcycle taxis to UberMOTO.

With its early and high-profile success, UberMOTO drew attention from not only the media, but also the Ministry of Transportation who was concerned about potentially unfair competition between multinational tech giant operating without license and local motorcycle taxi drivers who had properly registered to provide services. [3] By May 2016, the ministry decided to proceed in favor of the local drivers and declared a ban on UberMOTO in Bangkok. [11]

UberMOTO’s attempt to penetrate the motorcycle taxi market illustrates a serious threat to traditional motorcycle taxis operating model from digital transformation. In my opinion, instead of competing against Uber or other tech companies, the traditional motorcycle drivers should strategically look to collaborate with tech companies and leverage on their capital resources and innovation, which would allow the drivers achieve higher utilization, generate more revenue and deliver better rider experience. 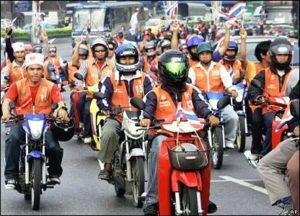 [8] Uber, “Bangkok, now you can pay for your Uber rides with ca$h!.” https://newsroom.uber.com/thailand/ubercashbkken/. Accessed 18 November 2016.

Duolingo: Working for your Education