Digital transformations have created operational and market efficiencies that generate value for businesses and their consumers.  However, many new tech companies, driven by the competitive nature of open platforms like the iPhone App Store, have also catered to the millennial generation’s tendency to want services for free.  In a space where the mentality is market share first, many apps provide free services, hoping critical mass will drive future ad revenues.  However, other software developers have used more creative methods to both generate and capture value.

Duolingo is an example of such a creative value creation and value capture play.  As its founder Louis von Ahn explains, duolingo was conceived as a ‘twofer’, a business proposition that generates two separate kinds of value from the exact same event or transaction.1 For duolingo, this transaction is your language lesson, or more specifically, the translating component of your language lesson.  Duolingo creates a “gamified” language lesson experience2 on its smartphone app, part of which is contingent on users practicing their newly acquired language skills by translating short sections of text.  When the user partakes in these translations, they exercise their language skills and gain points for completing each lesson.  Duolingo’s business model however, hinged on the realization that there is also inherent value created through the act of translation.  In effect, they can get users to translate any short segment of text provided for free, and through aggregation of many users’ exercises could gather a full translation of any document1. Duolingo can therefore monetize its free app by selling a translation service on the back end.

While technology has drastically changed the scope and reach of education through online platforms, very few online course platforms are profitable based purely on individual users.  Language course platforms like Rosetta Stone cost over 100USD for most basic packages3, and have significant institutional customers4.  Large non-institutional free course platforms like Khan Academy are non-profit and supported by donations5.  More recent information suggests that duolingo’s translations business may not so sustainable and profitable in the long-term.  As a privately funded company, little information is available regarding its financial status, however a $45 M series D funding round in June of 20152 suggests that profitability has yet to be achieved.  While duolingo seems to have successfully provided translation services to high-profile customers like CNN, the company seems to have stopped scaling up the translations business, and is no longer accepting new clients for translations2.  Instead, it may be turning to new sources of revenue such as language certification tests6. 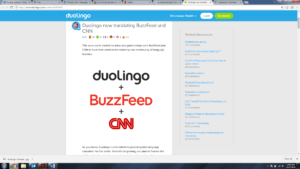 Duolingo demonstrates both creative value generation and capture, and the challenges of successfully executing such a model to achieve profitability.  In order to succeed, Duolingo needed to provide highly compelling value to both of its two separate customers; duolingo users, and translation service users.  As a language lesson platform for individual users, duolingo has captured a significant market as a smartphone app.  As a translation service however, its position may be more fraught.  Despite the potential benefits of verifying translations by compiling a large volume of overlapping user translations, the fact that translations are being provided by language learners rather than professionals may deter a large portion of customers.  Duolingo’s value proposition would therefore likely be as a low-cost translator.  In addition, the most valuable translations would come from users who had invested significant time to become advanced users.  Given that user churn is often high on smartphone apps, duolingo may have challenges retaining users until that point.  Duolingo’s public rationale for not pursuing the translations business was that it would divert too much attention away from the social impact aspect of the business.  In other words, valuing education over revenues.  Given the initial vision for the company to be self-sustaining, I would speculate as to whether the costs associated with the duolingo translation business turned out higher than anticipated. 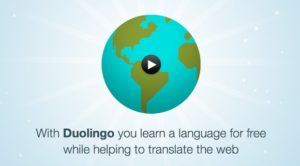 In today’s global environment, language is a critical barrier to unlocking economic value.  However, professional translation services can remain exorbitantly expensive, in part because automated processes like google translate have not yet attained a level that is acceptable for professional translation of full documents.  Duolingo has a strong social impact value proposition, providing free language education to bridge language gaps.  The data duolingo is generating is academically valuable as it can give significant insights into human learning behaviors and patterns.  However, its business proposition may be challenged by its ability to generate high-quality translation outputs as well as its limited perceived value to buyers of translation services. As profitability is key to duolingo’s success as a for-profit education company, I sincerely hope they will successfully monetize their business, either by improving their translation business value proposition, or by partnering with large institutions to support their language certification program.

6 Duolingo, “Get recognized for your English fluency,” https://englishtest.duolingo.com/, accessed November 2016.

GameStop – A casualty of digitialization?

Student comments on Duolingo: Working for your Education