We’re all guilty of it.

Maybe it was Adele, or Aziz Ansari, or the Grateful Dead’s Fare Thee Well show.  Hopefully it wasn’t Nickelback.

Each and every one of us has, at some point in our lives, whipped out our phones at a concert to snap a photo or video.  And while some performers have embraced mobile phones—sometimes enlisting them as mass lighting props[1]—many artists are increasingly seeking ways to prevent fans from excessive and uncontrolled mobile phone use at live shows.

Enter Yondr, a startup that has a solution for limiting phone use in sensitive areas by creating “phone-free spaces”.[2]  Yondr’s product is remarkably simple.  As people enter a venue, they are given a Yondr pouch, which comes in 3 different sizes.  The attendee places her phone in the Yondr pouch and, when she enters the GPS designated phone-free zone, the pouch automatically locks.  If the attendee needs to use her phone, all she has to do is step outside of the phone-free zone to unlock the pouch and access her phone.[3]

Yondr used Alibaba to locate Chinese manufacturers to assemble its secure pouches, and leases the cases to venues for approximately $2.00-2.50 per case per day, with discounts for larger orders.[4] 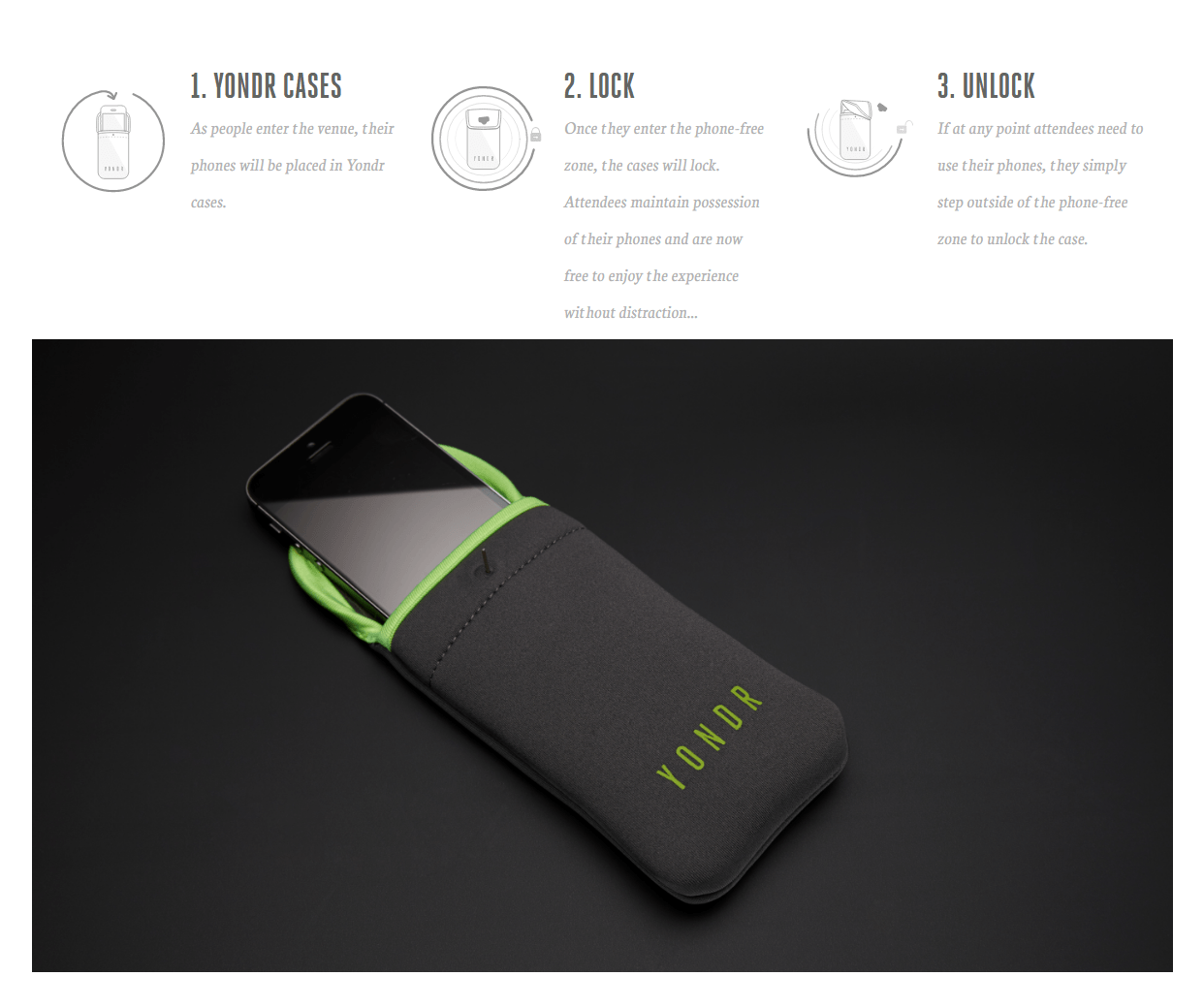 Not surprisingly, some of the first adopters of Yondr were stand-up comedians.  A comedian may take months or even years to perfect a joke, and they often use unannounced walk-ons at small comedy venues to test out new, unrefined material.[5]

However, if a bootlegged video of a comedy routine comes out before a major tour or network special, it can prematurely spoil the joke, sending a comedian back to the drawing board.  For this reason, many comedians—including Dave Chappelle, Hannibal Burress and Louis C.K.—utilize Yondr at their shows.[6]

Yondr’s vision is “to show people how powerful a moment can be when we aren’t focused on documenting it or broadcasting it,”[7] and it isn’t stopping at concerts and comedy shows.  Yondr is also expanding into other applications, including schools, restaurants, wedding venues, and movie theaters.[8]  In the case of Sunnyside Environmental School, students and teachers use Yondr pouches throughout the school day, with the teachers keeping the unlocking mechanism.  According to the school’s sustainability coordinator, the school “want[ed] to show students that there can be a difference in the way they interact with each other and their teachers when everyone in the classroom is present and engaged in a particular lesson.”[9]

However, the future of Yondr does not look too promising.

First, some artists admit that phone use at shows isn’t always a bad thing.  For example, when a fan posts photos or videos online, that generates earned media for the artist, which can be especially valuable for building word of mouth fo 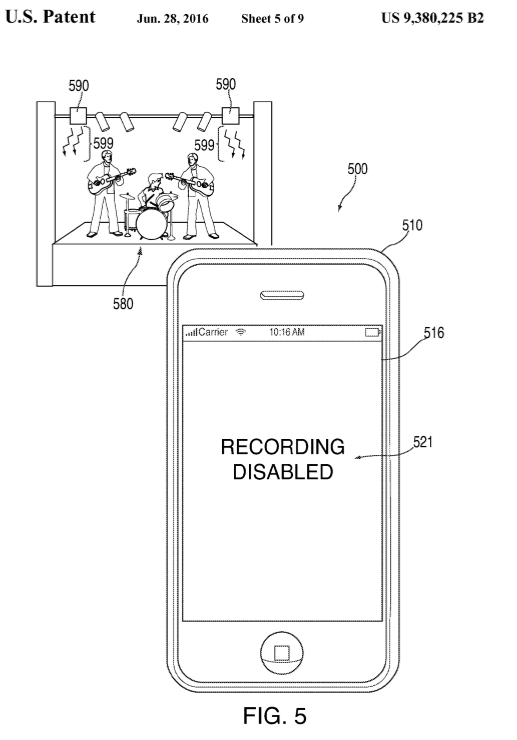 Second, Yondr does not have an adequate plan for emergency situations.  Locking a phone in a pouch could expose Yondr to considerable liability in the event that someone is urgently trying to reach a concertgoer, or if a Bataclan type event occurred at the venue.  Graham Dugoni, Yondr’s founder, was recently asked about the emergency safeguards of Yondr in an emergency, but Dugoni replied that their “general protocol” only included “multiple unlocking stations” and a landline.[11]

Third, it won’t be long before Yondr is pushed aside by smartphone application developers and manufacturers.  Apple is already working on technology that would selectively disable a cell phone’s photo and video capabilities. [12]  Apple’s patent utilizes infrared signals with encoded data which—when received by an iPhone—would disable a function of the device, such as the photo or video application. [13]  The patent also contemplates less intrusive measures, such as applying a watermark to any detected images. [14]

To that end, Yondr’s tagline is ironically appropriate: “be here now”… maybe because Yondr won’t be here later. [15]

[1] See, e.g., “Is It Time to Ban Phones From Concerts?” The GRAMMYs, by Roy Trakin (Aug. 25, 2016), available at http://www.grammy.com/news/is-it-time-to-ban-phones-from-concerts (describing a concert during which Adele chastised a fan saying “I know you’re taking a picture, but I’m talking to you in real life,” but then later asked everyone to hold up their phone to provide a “glittering backgrop”).

[5] See, e.g., “Why Patton Oswalt Tore Into an Audience Member and Why There Are No Winners,” LaughSpin.com, by Dylan P. Gadino (Jan. 9, 2012), available at http://www.laughspin.com/why-patton-oswalt-tore-into-an-audience-member-and-why-there-are-no-winners.

[6] “Hannibal Buress Partners with Yondr so People Will Stop Using Their Phones at Shows,” The Daily Dot, by Audra Schroeder (May 19, 2015), available at http://www.dailydot.com/debug/hannibal-buress-yondr-phones-shows (noting how a bootlegged video of Hannibal Burress’ stand-up routine refocused public attention on Bill Cosby rape allegations).

[9] “Smartphone Lock Pouch Leaves Students to Their Own (Unusable) Devices,” Scientific American, by Larry Greenemeier (May 8, 2015), available at https://www.scientificamerican.com/article/smartphone-lock-pouch-leaves-students-to-their-own-unusable-devices.

[10] See “Is It Time to Ban Phones From Concerts?” The GRAMMYs, supra Endnote 1 (quoting William Morris Endeavor executive Marc Geiger, “It’s a very necessary annoyance, but also serves as both marketing and promotion. Everyone wants to share the content on social media to show that they were there.”).

Student comments on Turn In Your Phone, and Tune In to Life