What could pork chops and bitcoin, the decentralized digital currency, possibly have in common? More than you might think. The blockchain technology that powers bitcoin has the potential to reshape and transform other industries beyond finance, including food supply chains. Walmart, in partnership with IBM and Beijing’s Tshinhua University, is looking to capitalize on this digital frontier by introducing blockchain tools to the Chinese pork supply chain.[i] This technology would allow the retailer to trace the product from the farm to its Chinese storefronts to ensure quality and build consumer trust in the market. 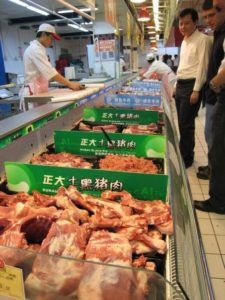 Walmart’s Business Model in China: Struggling to Adapt to its Value Proposition to Local Tastes

Walmart entered the Chinese market early, back in 1996. Since then, its presence has expanded to roughly 400 stores (as of 2015), but the market only accounted for 2% of the Walmart’s overall revenues.[ii] Despite tailoring the stores to local tastes, the big box retailer’s customer promise of “everyday low prices” (EDLP) hasn’t fully resonated with Chinese consumers because, more than prices, Chinese customers’ top priorities are authenticity and product quality. Cheap products are often viewed with suspicion. Therefore, the success of Walmart’s EDLP model is predicated on customer trust.

A blockchain in its simplest form is a distributed ledger. Imagine the ledger as a book. Everyone in the network has a copy of the same book, and every time a new transaction occurs, the same entry is entered into all of the books. If one book is destroyed, the others remain, or if a page is ripped out of one, the other books remain unaltered.[iii] The list of transactions is visible to everyone. This decentralized system contributes to the security of the system and helps to build trust across counterparties who might not trust each other because it’s very difficult to falsify or destroy the record.

The blockchain technology Walmart plans to employ is a “private database co-developed by IBM … designed to provide the retailer with a way to indelibly record a list of transactions indicating how meat has flowed through a commercial network, from producers to processors to distributors to grocers—and finally, to consumers.”[iv] Information such as farm origin, expiration dates, product temperatures, and shipping information would be stored on the blockchain. Prior efforts to secure the supply chain relied on radio ID tags and barcodes, but according to IBM global supply chain lead Paul Chang, “the missing piece was a shared forum where companies could begin to see each other’s transactions and develop trust. That missing piece is something like the blockchain.” [v]

Business Model Implications and Next Steps

If the pilot is successful in creating a supply of safe, affordable pork produced according to modern production standards, broader applications could fortify Walmart’s business model in China by convincing consumers that they can benefit from higher quality products at Walmart’s lower prices and positioning Walmart as a trusted retailer.

There are vast opportunities for expanding its approach to other food products sourced in China and other developing markets, such as produce, poultry, or seafood. A recent study by ocean conservation group Oceana revealed that one in five seafood samples tested worldwide is a completely different species that what the label claims.[vi]  Walmart stands to benefit from this approach even in developed markets, where blockchain applications could pass through more transparency to more affulent consumers concerned about sourcing and/or sustainability. Clearly, Walmart and IBM are just scratching the surface of what’s possible with blockchain. Before we know it, we might find blockchain extending from our wallets to our dinner tables.

Wild Technology for Wild Wings – a Restaurant with no Servers?

Turn In Your Phone, and Tune In to Life