The airline industry is an important contributor to CO2 emissions worldwide, and until recently it has avoided some of the most serious repercussions of emissions-driven climate change.  Yet evidence is mounting that the industry writ large will likely suffer significant physical and regulatory consequences in the coming years. (1) Airlines are beginning to take strides to address the root causes of climate change as well as stave-off some of the potential impacts, and one company in particular, United Airlines, has adopted a multifaceted approach.  However, it is unclear if United is doing enough to avoid more difficult times ahead.

Recent studies indicate that the physical manifestations of climate change will have a significant impact on airlines such as United in the coming decades.  A study published in 2016 found that doubling the total amount of CO2 in the atmosphere (which will occur by 2050 at current rates) could result in an acceleration of the jet stream by up to 15%, thus increasing flight times as a result of stronger headwinds and more frequent turbulence.  This could potentially cost in millions of dollars in aircraft maintenance and greater fuel consumption. (2) Climate change is also likely to negatively impact the amount of cargo and passengers that can travel on a given aircraft.  As average airfield temperatures increase, the maximum allowable takeoff weight of an aircraft decreases due to reductions in air density.  A Columbia University study found that for a Boeing 737-800 aircraft, the most common in United’s fleet (3), the number of weight restriction days between May and September may triple by 2050-70. (4)

United Airlines will also face increased environmental regulations in the coming years.  In 2015, the Environmental Protection Agency (EPA) laid the foundation for emission regulations on the airline industry through an official statement linking air travel to climate change. (5)  It is still unclear what form these measures will take, but the finding that jet exhaust posed a public threat removed a key roadblock to increased regulation. (6)

United Airlines is taking steps in several areas in order to mitigate the negative consequences of warming temperatures on the company.  The first area can be categorized as operational improvements and consists of incremental changes to existing systems.  One example is weight optimization on aircraft, where lighter-weight alternatives are implemented wherever possible across United’s fleet.  United has also implemented streamlined crew checklists to reduce taxi times and routine engine washes to reduce drag. (7)  The second area of focus is on technological improvements, particularly with respect to aircraft design and new engine procurement.  New aircraft winglets have boosted fuel efficiency by 3-5%, and the company is acquiring advanced aircraft with greater fuel efficiency such as the Boeing 787 and Airbus A350. (8)  Overall, United’s goals include a 1.5 percent per year increase in average fuel efficiency until 2020, and a stabilization of emissions thereafter.

While these initiatives have shown incremental improvement, they are likely to be insufficient to address the challenges United Faces as a result of climate change in the coming decades.  First, the company’s yearly fuel savings as a result of operational improvements are still more than offset by the growth in air travel each year.  In 2015, operational improvements saved 12.4 million gallons of fuel (approximately 1.6 percent of the total), yet total fuel consumption reported in the company’s financials still rose by 15 million gallons.  Second, while United’s goals comply with industry standards concerning emissions, EPA regulations are likely to be more stringent and will require more aggressive targets in coming years.  Finally, while the company is acquiring advanced airframes, the bulk of its purchases are still older models such as the Boeing 737.(9)  These aircraft have a long lifespan (averaging approximately 20 years) and will not be easily replaced by new variants.  Furthermore, a 2005 study from the National Aerospace Laboratory in the Netherlands concluded that technological improvements in jet engines will result in limited overall improvements in efficiency in coming years (see chart).  New aircraft are therefore only a small piece of a much more complex puzzle in boosting efficiency. 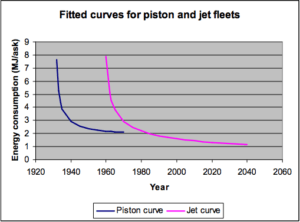 There are no easy solutions to the problems United is likely to face as a result of climate change, and the way forward will need to include a blend of current programs and new initiatives.  United should continue operational improvements to boost efficiency but also needs to partner with governments and international agencies to smooth industry-wide inefficiencies.  One area in clear need of improvement is the antiquated Air Traffic Control system.  Relying heavily on ground-based stations and voice communication, this system increases flight times and exacerbates delays. (11)  United should also continue to support the internationalization of environmental regulation by working with agencies such as the International Civil Aviation Organization to ensure that regulations are applied evenly across industry competitors. (799 Words)