By 2050, 9.7 billion people will live in this planet[1]. In order to feed 2050 global population, the Food and Agriculture Organization of the United States (FAO) estimates that world food production will need to increase by ~70%[2]. Of all the world regions, Sub-Saharan Africa’s population is projected to increase the fastest (114%)[3].  The good news is that research shows that Africa’s smallholder farmers will be more than capable of feeding the African continent.[4] The bad news is that African smallholder farmers will need to double their current crop production in order to feed their continent.[5]

In the last 50, the world, and in particular the United States of America, has seen tremendous improvements in their crop yields (yield of a crop per unit area of land cultivation) thanks to adapted seeds and fertilizers, best-in-class agronomic practices and major technology deployment. On the other hand, for the last 50 years, Africa has seen almost none crop yields improvements (see graph below – FAO.com). If Africa wants to feed itself, it needs to catch up, and it needs to do it fast! 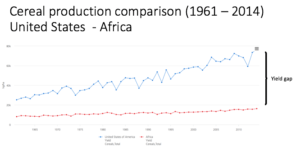 Esoko is using digital technology to link historically fragmented markets. There are thousands of organizations around Africa that are trying to talk to farmers to improve their yields. African governments, ministries of agricultures, multilateral organizations (e.g., World Bank), donors (e.g., The Bill & Melinda Gates Foundation), businesses (e.g., John Deere, seeds and fertilizers companies) and social enterprises want to reach out to farmers in villages to make them use new seeds, use the right amounts of fertilizers, organize as a group to get microfinance loans. They also want to tell them what they should grow, depending on fluctuating market prices, and explain to them how to link to potential market. That said, talking to farmers is difficult! Smallholder farmers are spread in vast areas, and infrastructure is very poor. It is not scalable to have personal one-to-one interactions. Esoko connects players in a scalable way using mobile technology.

Right Information at the right time

A farmer needs to know exactly when he or she should plant, if there is a disease outbreak, if rain is coming or not, if they should use fertilizer or not, if prices of a certain commodity are going up or down, if there is a drought or flood! Agriculture is about protocols, doing the right things at the right time. Esoko uses SMS and voice messages (to address literacy issues) to connect different players. The information they communicate is divided in four main areas[6]: Market prices, Potential, buyers, Rain forecasts and Crop protocols.

Esoko is currently working in 15 African countries. Esoko creates personalized solutions for each of its clients. Esoko makes money by charging $10,000 USD to $100,000 USD, depending on the complexity of the product they are selling.  Esoko has created more than a dozen solutions for business that are trying to convert farmers into consumers, and for governments and NGOs that want to improve the livelihood of their beneficiaries.

Esoko is expected to make a profit of $3 million USD by 2020. In addition, by 2020, it also expects to have targeted 3,000,000 smallholder farmers each getting a $150 USD of additional revenue per year, which translates in $450 million USD of transfer value into the smallholder farmer community[7].

Moving ahead, Esoko should consider two avenues of growth: moving to other markets (e.g., Latin America and India) and data licensing to companies such as Thomson Reuters of the data they have collected in the last 10 years.

[4] Annan, Kofi and Sam Dryden. “Food and the Transformation of Africa: Getting Smallholders Connected.” November/December 2015 Issue.

The future of banking through cell phones