The State of Streaming: In October 2018, AT&T announced plans to launch a subscription video on demand (SVoD) platform combining HBO, a 5 million subscriber streaming powerhouse, with its other WarnerMedia assets [1]. Around the same time, Disney freed up $15 billion to invest in its direct-to-consumer, Disney-branded platform set for launch in 2019 [2]. Meanwhile, Hulu reached 12 million subscribers, Amazon invested over $5 billion in original content after winning an Emmy and multiple Oscars [3], and Apple, Youtube, Facebook, and even Walmart announced intentions to compete in the SVoD space. Only a decade after Netflix went all-in on its first-to-market streaming model, every goliath in the entertainment business was primed to steal its market share [4]. To date, Netflix’s competitive advantage for its 125 million subscribers has been its commitment to using data and machine learning to differentiate the user experience and content offering, with an annual investment of over $1 billion in technology [5]. But will this be enough for Netflix to sustain its leadership position in our living rooms for the next decade?

Netflix’s Edge: For an SVoD, key differentiating factors are user interface and content offering. Netflix, which has never been bashful about collecting data [Exhibit 1], uses machine learning for both to produce a seamless, customized viewing experience. Since users typically bail after ~60-90 seconds of trying to find something to watch [6], the recommendation engine is a critical component of the user interface, generating 80%+ of total tv show viewings on the Netflix, specifically [7]. Netflix focuses on both what content is being recommended and how those recommendations are presented to the user. “What content?” is addressed through a common algorithm in recommender systems called ‘collaborative filtering’, which compiles data from multiple users to produce individualized preference predictions. The teaching inputs include explicit (Chiara thumbs-upped Black Mirror) and implicit data (Chiara binge watched Black Mirror in one weekend), and the tags for each title are comprehensive, including filming location, genre, cast composition, and categorizations like “shows that reveal the dark side of society”. The algorithm also considers behavioral patterns, such as viewing frequency and times, along with biases similar users have exhibited [8]. After predictions are generated across various algorithms, Netflix uses linear stacking to combine all results of simultaneous predictive models to produce a final recommendation [9].

But Netflix doesn’t stop here: machine learning is also used to determine how best to present recommendations to the user. While the iterative nature of the home screen’s rows of titles may seem like an obvious customization to frequent users, many may not realize that Netflix even customizes the image of a title based on what is most likely to convert users. To do this, Netflix decomposes each individual frame within the title to isolate most impactful stills using face detection, motion estimation, camera shot identification, and object detection, which are then pushed to the creative team as foundations for customized artwork [10]. During the viewing process, Netflix then uses machine learning to optimize streaming quality based on device and location. 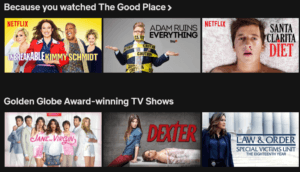 A further benefit of all the data used to feed the recommendation engine is its ability to inform decisions on content offerings – both licensed and original. This can be observed through Netflix’s recent emphasis on original romantic comedies. By analyzing viewing patterns, Netflix noticed that viewers were frequenting its library of old romantic comedies and the supply of new rom-coms were limited. The company reacted by releasing 11 titles of this genre in 2018, resulting in over 80 million accounts watching at least one globally. One of these titles “To All the Boys I’ve Loved Before” was one of the most viewed original films ever, with strong repeat viewings [11].

Looking Ahead: In a now hyper-competitive SVoD landscape, Netflix’s key differentiator is its massive library of viewing data informing future decisions. While this is an undeniable first-mover advantage, as companies withhold titles from Netflix by offering them vertically, Netflix will become increasingly dependent on original content. The company has begun to address this longer-term issue by applying a data-driven approach to the entire production cycle, using mathematical optimization to reduce costs and time spent on everything from location-hunting and cast-scheduling to post-production work [12]. Notably, Netflix is also spending nearly twice as much on marketing vs. technology [Exhibit 2], acknowledging that recommendation engines alone are not enough to drive traffic to brand new Netflix-only titles.

Key Questions: How differentiated is Netflix’s approach to technology and is the recommendation system powerful enough to maintain an uncontested user experience? Will Netflix be able to utilize its data to produce / acquire enough original content, quickly enough to stave off the competition? And importantly, will competitors take advantage of any blindspots generated by Netflix’s maniacal commitment to data as a key driver of decision-making? (797 words) 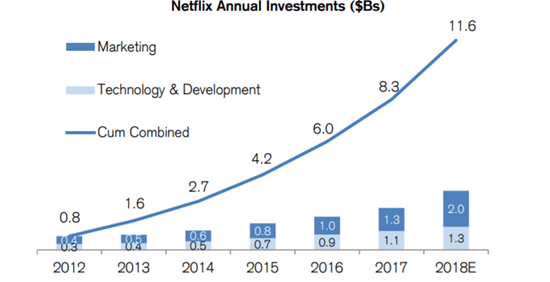 The Impact of A.I. and Machine Learning on Financial Data at S&P Global

Student comments on To All the Shows I’ve Loved Before: Netflix and Machine Learning