Imagine you’re on the tail end of a redeye flight. As the plane descends and the pressure in the cabin shifts accordingly, you hear a sudden “pop” and feel excruciating pain in your ear. You’ve ruptured your eardrum. After a night fraught with pain—waiting for business hours to resume—you call office after office of otolaryngologists hoping for an urgent appointment, desperately scouring websites and poorly-organized directories for phone numbers, only to learn that virtually every otolaryngologist is booked weeks in advance. The pain is unbearable. After many hours, you are relieved when you finally find a provider who can fit you into their schedule. Four days later.

With millions of previously uninsured Americans now receiving health insurance under the Affordable Care Act, medical practices are experiencing ever-growing demand for their valuable services. Unfortunately for patients everywhere, this demand has put further strain on physicians’ already overbooked schedules, leaving many patients to either delay their care or seek treatment elsewhere (often in overcrowded emergency departments where bills can reach astronomical amounts).[i] The patient described above did eventually make it to the doctor, and soon thereafter founded ZocDoc; an online service that helps instantly connect millions of patients with scarce appointment slots in otherwise busy doctors’ schedules.[ii]

Taking a Lesson from Yelp

Finding the right doctor is no easy task; you must find one who is nearby, practices within a certain specialty, accepts your specific health insurance plan, has openings convenient for your schedule, and is known to provide good care. Patients have traditionally relied on referrals from other doctors (usually requiring an additional visit to their office) or word-of-mouth from friends and family, limiting the effective number of choices at a patient’s disposal. In retrospect, the solution seems obvious—people already use services like Yelp.com to search for nearby restaurants, read customer reviews, and make reservations—why not provide a similar service to find doctors? 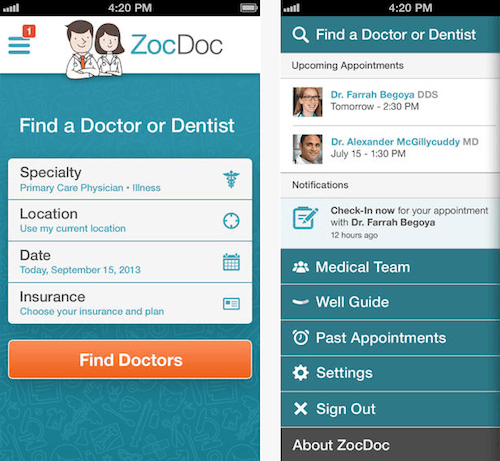 ZocDoc allows customers to “see doctors’ open appointment times and book instantly online, make informed choices with verified reviews, and stay on top of important checkups with tailored reminders.[iii]” The service is provided free to patients (2 million of whom use the services each month) while doctors pay a flat monthly fee[iv] to be listed on the service. The service integrates seamlessly with the doctors’ own scheduling software, displaying openings and bookings in real time. Scheduling is automated, allowing patients to make appointments even after hours, which frees office staff to perform other critical tasks. The service was an instant success, with analysts estimating that the company remains profitable in every market in which it operates.[v]

Many More Symptoms, Many Potential Cures

More than 26% of Americans wait longer than a week for a doctor’s appointment, and the experience in some markets is even more extreme; in Boston, for example, patients wait 66 days on average just for a physical exam.[vi] Although ZocDoc makes the process of searching for and booking appointments much easier, the underlying problem of low availability is expected to worsen—by 2025, it is estimated that there will be a 20% deficit in the physician workforce needed to care for our aging population.[vii] In light of rising demand, doctors are increasingly overbooking patients (similar to airlines and restaurants) in order to accommodate patients when others cancel last minute,[viii] further overcrowding congested waiting rooms. However, these problems open up many opportunities for ZocDoc to further enhance the interface between doctors and patients.

ZocDoc’s success illustrates how impactful mobile technology can be in helping streamline the delivery of healthcare in an otherwise convoluted system. Development of creative digital solutions to reduce these hindrances are vital to sustaining the equitable provision of healthcare for years to come.

What is Metered is Managed

Student comments on The ZocDoc will see you now…