The New York Times’ core purpose is “to enhance society by creating, collecting and distributing high-quality news and information” (according to their company website) [1]. With this goal in mind, the explosion of the digital world has made the reach/distribution of their report easier to distribute on a global scale.

However, the new digital world has been difficult too — changing customer expectations, new competitors, and issues with monetizing a non-physical product. Furthermore, what does the future of the company look like? How can it continue to lead in journalism and generate sizable profits when there are so many free news sources available online?

While the Times can reach more people at the touch of a button and have a wider-spanning reach, the element of immediacy puts pressure on the newsroom to produce news around the clock. Without the bottleneck of the printing press and getting physical papers to readers’ doorsteps, the customer expectation is to learn about news as soon as it happens.

This means the newsroom needs to be reporting, analyzing, writing, copy editing, curating and fact checking at all hours of the day to stay competitive. It also means that one of the Times’ biggest value props – being reputable – at times works against its ability to release news more quickly than its competitors. The Competition – Old and New

Historically, other news publications such as the Wall Street Journal and The Washington Post would be considered the competition. However, now competing in the digital space, The Times now has the increased competition for readers’ time and attention — digitally-native news sources such as The Huffington Post, news aggregators like Flipboard, social media such as Facebook and Twitter, and any other mobile apps that might be consuming a readers’ time during their commute or other downtime. These apps have also contributed to new reading behaviors by making it easier to consume many different sources at one time. Compared to its traditional competitors, The New York Times has done quite well in digitizing quickly and innovating. For a paper known for its long history, strong culture and long-tenured employees, it’s easy to imagine why change would be difficult for the organization. However, the Times put together an innovation team to focus on this issue and their report was leaked in 2014 [3]. 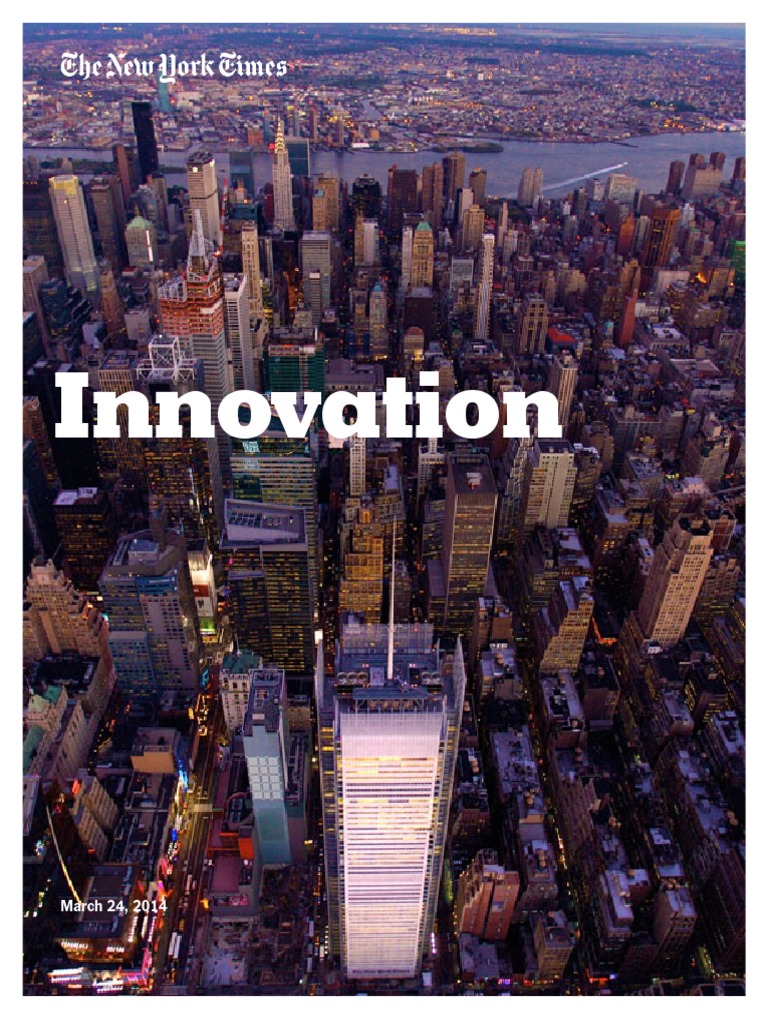 The Front Cover of the leaked Innovation Report

The report was honest about the Times’ biggest challenges and areas of growth, discussing the need for the paper to focus on building out its digital business despite the lion share of its revenue still coming from its declining paper business.

The institution of the paywall in 2011 [2] was successful in revenue generation. However, there was and continues to be a large subset of US news readers who are satisfied with free news sources.

Another challenge is that while the paid subscriptions of the Times have increased, revenue has still fallen [5]. This is somewhat attributed to declining advertising revenue. Another contributing factor may be that the Times is unable to offer its digital subscriptions at similar prices to its home delivery ones [4].

They’ve already made progress by innovating rapidly. The Times has come out with a variety of new products focused on repackaged verticals of their report such as NYT Now, a streamlined version of the news, and NYT Cooking, 15,000+ digitized Times recipes packaged into a website and app. They also have started to produce Virtual Reality apps [6], aligning themselves with new technology, and by doing so, hopefully address a new audience.

The Times still has 165 years of news, information, photos, analysis which are an advantage, but also, they need to continue to invest in producing new high quality products that match the quality of their journalism. By doing so, they will build out their base and once their tech-based products are more mature and their user base is large, monetization of new products will come more easily.

[3] NiemanLab, “The leaked New York Times innovation report is one of the key documents of this media age,” http://www.niemanlab.org/2014/05/the-leaked-new-york-times-innovation-report-is-one-of-the-key-documents-of-this-media-age/