“The blockchain concept aims to combine the peer-to-peer computing ethos of Silicon Valley with the money management of Wall Street.”[i] 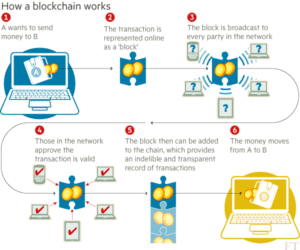 Although up to this point blockchain has largely been used to facilitate bitcoin transactions, the applications of the technology go far beyond bitcoin. Blockchain is a shared database technology that uses a network of cryptographically connected computers to record blocks of transactions, which tend to be in standardized contracts. Once completed and approved by all computers on the network, each block of transactions is recorded sequentially and forms a chain. The security of this chain is based on the interconnected nature of these individual blocks as the chain, in its entirety, must match all ledgers (known as distributed ledgers) in the system. Should any one ledger become inconsistent with the other ledgers in the network (due to hacking activity for example), it can easily be spotted, isolated and rectified.

How does Digital Asset Holdings use Blockchain? 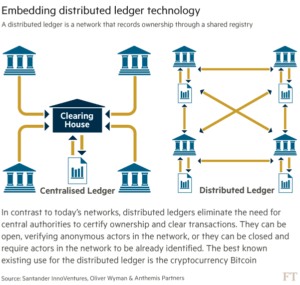 Digital Asset Holdings uses blockchain to “improve post-trade processing efficiency for banks and other financial institutions,” according to company head, Blythe Masters.[ii] Blockchain allows for the near instantaneous creation of a single record as opposed to the current norm of numerous records that must in turn be reconciled. Not only does this alleviate many of the issues associated with a process that is time consuming, expensive and cumbersome it also immediately highlights discrepancies in trading positions between two financial institutions. In an industry where margins are falling and trading errors can cost banks hundreds of millions of dollars[iii], the technology offers immediate, apparent benefits.

Additionally, the company has partnered with JPMorgan in hopes of using the technology to address liquidity mismatches with the bank’s loan funds. At the moment, investors can take money out of the funds relatively quickly while the underlying loans often take much longer to sell. With the use of blockchain’s standardized contracts and rapid settlements, JPMorgan and other banks may soon be able to liquidate fund assets at a rate more commensurate with investors’ redemption timelines.

What are the opportunities for Digital Asset Holdings in the future? 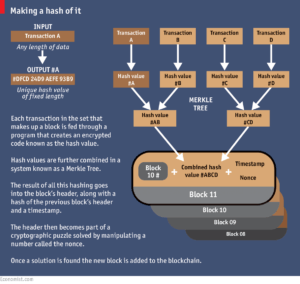 Many proponents of blockchain believe its applications could lead to billions of dollars in savings for the financial services industry as it fills a variety of needs ranging from removing system inefficiencies to eliminating the need for trade insurance. A recent report done by Santander, Oliver Wyman and Anthemis estimated the technology could cut costs for the banking industry alone by $15-20 billion by 2022.[iv] The chief executive of Accenture’s financial services operating group estimates blockchain could save 10 – 20% of investment banks’ technology costs which total an estimated $100 billion, annually.[v]

As the Bank of England notes at the end of a report published in 2014, “the application of decentralised technology to this platform of digital information could have far-reaching implications…The impact of the distributed ledger on the financial industry could be much wider than payments.”[vi]

And as the FT built upon that sentiment in an article last year, “applications range from storing client identities to handling cross-border payments, clearing and settling bond or equity trades to smart contracts that are self-executing, such as a credit derivative that pays out automatically if a company goes bust or a bond that regularly pays interest to the holder.”[vii]

Beyond the world of finance, I envision Digital Asset Holdings using the know-how necessary to service the banking industry and the cash flow the industry provides to launch a company unprecedented in scope within in the FinTech world.

The ability to immediately cash settle standardized contracts means that Digital Asset Holdings could quickly become a competitor to marketplace companies like Ticketmaster, eBay and Amazon while simultaneously taking market share from payment service companies like PayPal and Venmo. The standardized contract allows users to both transact painlessly and to monetize quickly. To give an example, the company could create a contract that allows counter parties to exchange reservations and thus, to easily monetize something that has not traditionally been capitalized on. In a world of ever expanding markets that are increasingly efficient, Digital Asset has the ability to create markets we’ve never seen before.

There ain’t no such thing as free Internet

Student comments on The Ever Expanding Reach of Blockchain